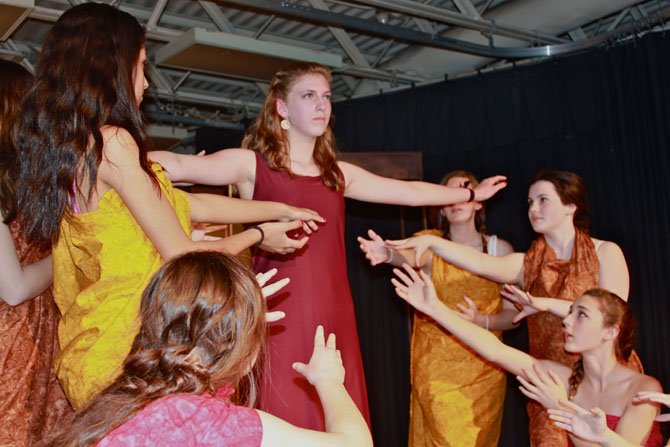 Aida, played by Kaitlyn O’Conor, is caught between her country and her love.

It’s the timeless story of star-crossed lovers - with a twist. Cooper Middle School is performing “Aida,” the story of a deep love stirring in the midst of a war between two nations, starting today. “The music’s excellent and it’s a beautiful show,” said theater arts teacher and play director Meg Baber. “I love the drama of it and how meaningful it is. And I do like to keep challenging them. I don’t want to make it too easy.” The story follows Aida - an enslaved Nubian princess as she falls in love with Radames - an Egyptian soldier already promised to the Pharaoh’s daughter. “As their forbidden love blossoms, Aida is forced to weigh her heart against the responsibility she faces as leader of her people,” Baber said in an email. “Aida and Radames' love for one another proves transcendent of cultural differences and ushers in a time of unprecedented peace between the warring nations.” She said it is a very mature, challenging play for the middle school age group, but believes that many of the actors are talented enough to handle it. About 70 people are a part of the show’s cast and crew.