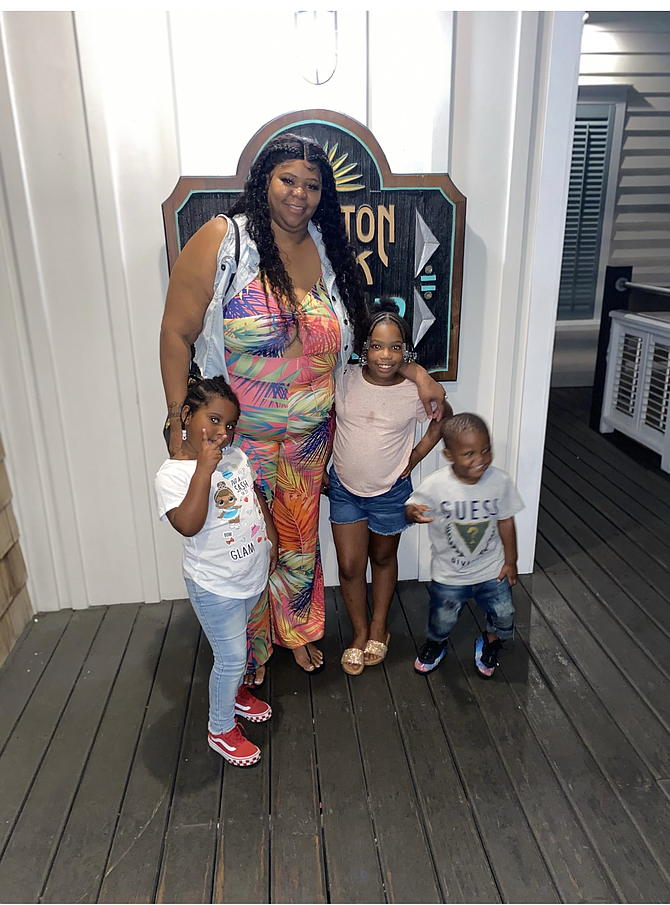 African American parents and grandparents, like Vonetia Hartley, pictured here with three of her grandchildren, are giving their offspring in-depth lessons during Black History Month. Photo courtesy of Vonetia Hartley

When Tracy Grant’s fifth-grade son Hunter came home from school one day during Black History Month several years ago, she recalls his recounting of a lesson that he’d just learned. He said that his social studies teacher told the class that most slaves were treated well because their owners saw them as an expensive investment. Grant was speechless.

“I was baffled by that level of ignorance. Did that teacher not know that slaves could have their finger chopped off for knowing how to write or that some small slave children were fed slop in the same trough that were used to feed pigs on the plantation?” asked Grant, a registered nurse and Springfield mother of two. “That was when I decided that if I wanted my children to learn about Black history, I would have to teach them myself.”

In the age of racial tension and restrictions around the teaching of African American history, black parents are serving as history tutors to ensure that their children receive a comprehensive and unbridled education on the atrocities, both past and present, faced by members of the African diaspora. A few local parents share their ideas.

“I don’t focus on blaming or bad mouthing anyone, but I make sure my children know about the racist things that happened in the past,” Anderson said. “They have to know our country’s past actions so that they can understand what is going on today and why. Minimizing the realities of slavery does a disservice to not only Black students, but to society as a whole. How can we even begin to deal with racial problems in this country if children grow up with inaccurate views of the tragedies of our past?”

From slavery and lynching to the Jim Crow era and the Civil Rights Movement, Grant uses trips to historical sites to give her children a lesson in Black history. “When I take my children and their friends to Mount Vernon, I don’t go on the guided tour,” she said. “I give them my own tour and explain our history. No matter how the media portrays us today, our children need to understand that we come from hardworking ancestors.”

As an African American parent, Gloria Anderson, a Chevy Chase, Maryland mother of three, believes that it is her job to offer her children in-depth lessons rather than broad overviews. “Most people think of Martin Luther King and Rosa Parks when they think of Black history, but there are so many more people of color who have made great contributions to this country,” she said. “Everyone should visit the African American History Museum. Even though we’ve made strides, stereotypes and feelings of victimization have caused members of our race to have a sense of hopelessness.”

“I have to make sure that my children know about Black heroes like Dr. Charles Drew, continued Anderson, referring to an African American surgeon who was known for his lifesaving blood plasma research.

Many Post-Civil War periods in African American history, such as the forced sterilization of African American women, are omitted from mainstream teachings, says Anderson. “Reading historical fiction gives children a sense of the psychological damage that African Americans have endured throughout history,” she said. “I make sure that all of my children read books like ‘Like Roll of Thunder Hear My Cry’ by Mildred Taylor. It paints a real picture of what life was like for sharecroppers. There are some children who grow up thinking that sharecropping helped Black people get on their feet and create a better life for themselves after slavery ended. In reality, Whites used lynching, beatings and burnings to intimidate sharecroppers so they stayed chained to the land without the possibility of improving their lives.”

Presenting Black history in a way that young children can understand, preschool teacher Vonetia Hartley, Alexandria mother of three adult children and four grandchildren, uses the achievements of prominent African Americans figures to help her students and grandchildren realize that there are no limits to what they can achieve. “I want them to understand the importance of knowing who they are and how unique they are," she said. “I want them to know that there are so many options in their future. Whether they want to be president, governor, doctor, police officer, airplane pilot or inventor, they can become it.”

Extending lessons on African American history beyond 28 days in February is what Grant encourages. “It should be woven into our everyday lives so that it's not seen as something special to think about in February,” Grant said. “Our ancestors made contributions that affect us every day.”