Site of the Herndon Downtown Redevelopment Project anchored by the Town-owned arts center.

Part of a six year series.

Nearly 104 years after The Big Fire of 1917 destroyed much of Herndon's downtown, the near-final hurdle to history looms. The Fairfax County Board of Supervisors is scheduled on Dec. 7 to review the Town of Herndon's request of $5 million in Economic Opportunity Reserve funding authorization to cover a gap in the Town's economic model and make its Downtown Redevelopment Project a reality. Given the anticipated approval, the course is set for the project's long-awaited groundbreaking on or about Dec. 31, 2021. 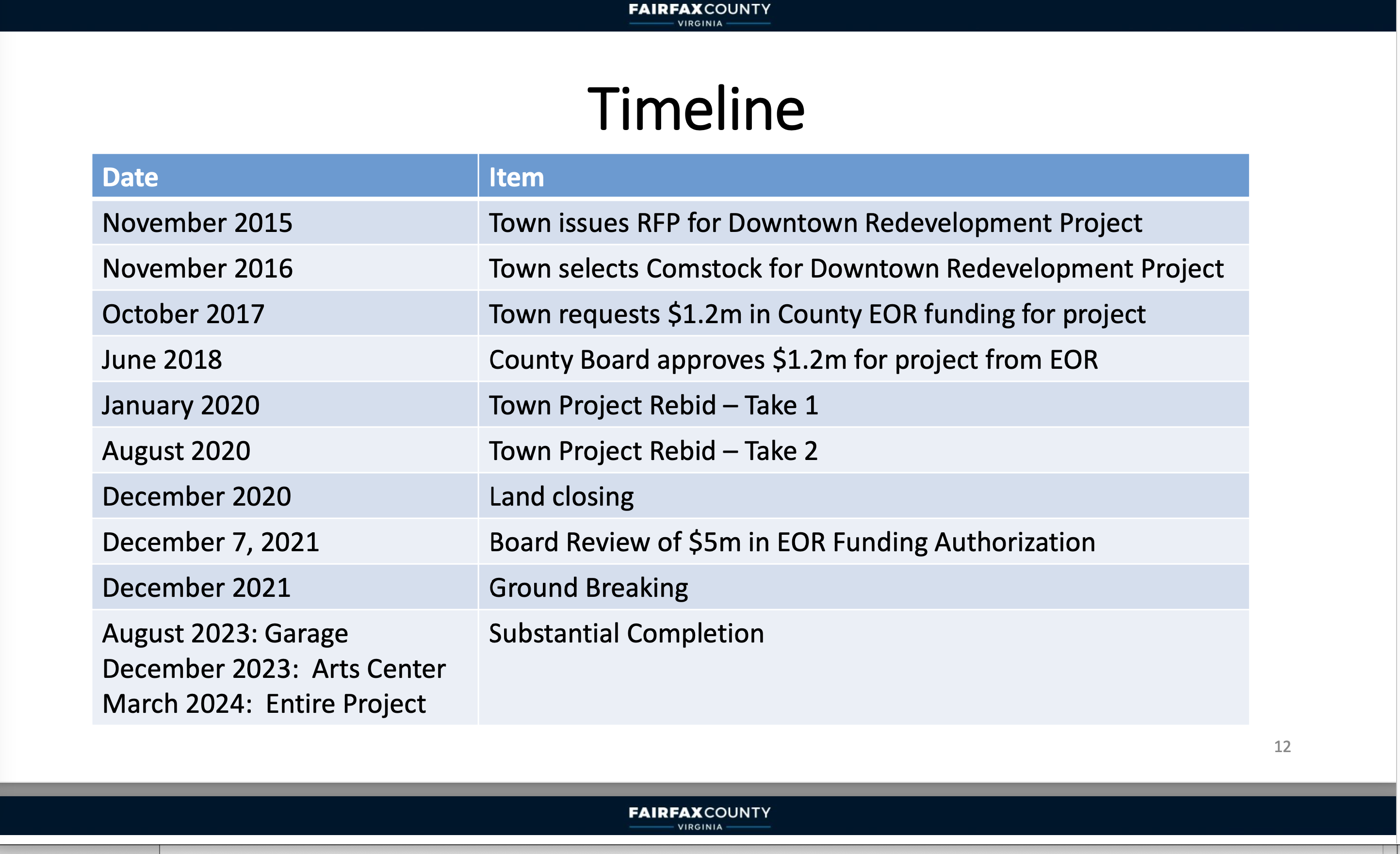 On Oct. 26, during the Board of Supervisors Economic Advisory Commission meeting, Chair John W. Foust (D-Dranesville) said Herndon's downtown revitalization was important to the Board because it creates the type of community that would attract the 21st-century workforce. "[This] is how we are going to be a successful economy going forward," Foust said. Seeing and hearing no objection to the $5 million request, Foust said, "I'm assuming we're okay with bringing it to the board and taking a vote." While the Town must follow up with the County Board and staff on specific issues raised during the meeting, the Board review of the $5 million in Economic Opportunity Reserve Funding authorization is scheduled for Dec. 7, 2021. 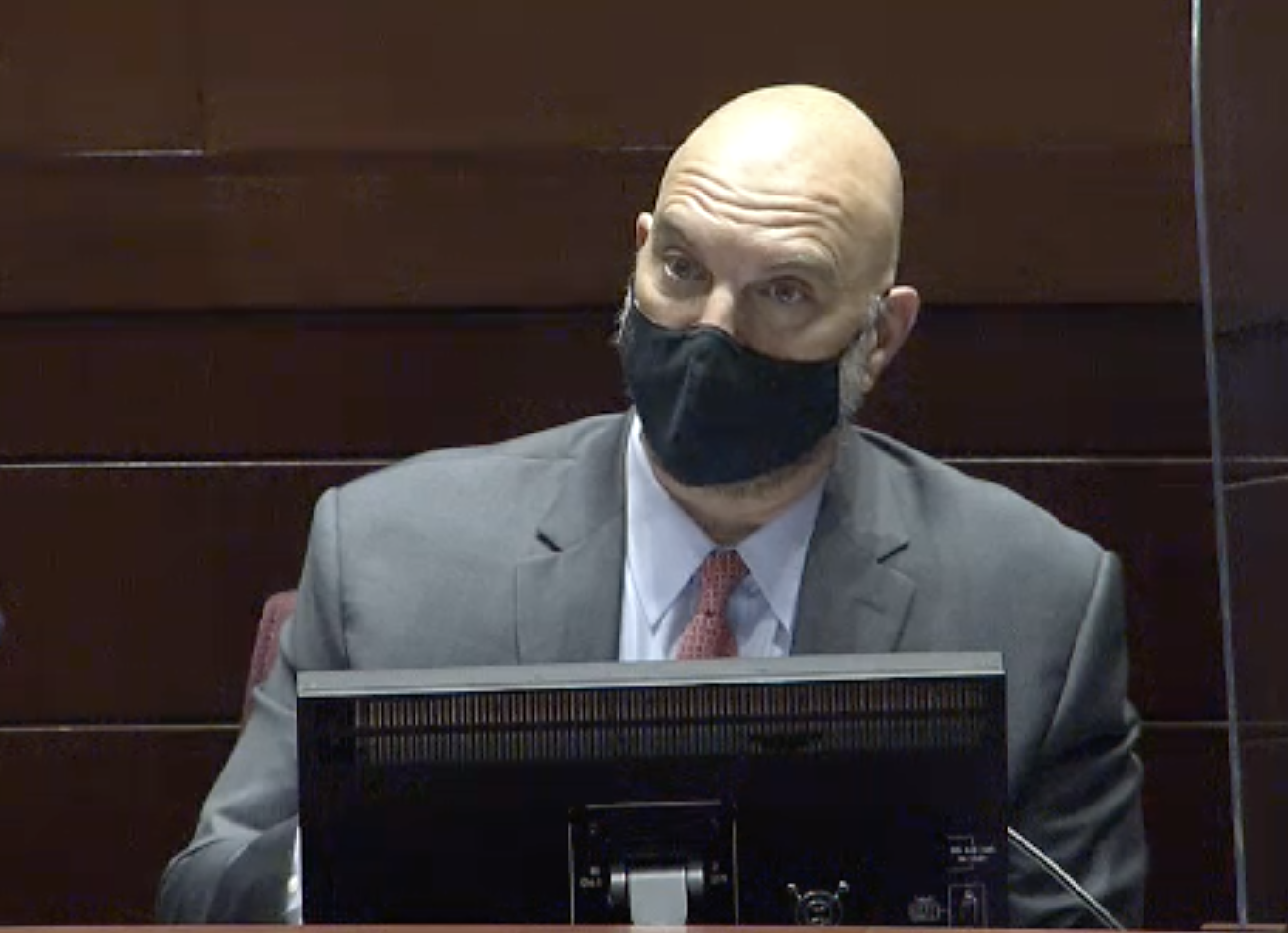 the Town of Herndon and Scott Sizer, Incentives and Catalytic Projects Department of Economic Initiatives, Fairfax County Government, presented.  According to Ashton, forward movement on the Herndon Downtown Redevelopment hinges on receiving the $5 million from the County's EOR. The grant would help close a project gap variance of $23.6 million. Under an agreement with developer Comstock Herndon Venture, LC, the Town agreed to share 50 percent of the project gap totaling $12.3 million each.

Ashton said that although the Total Project Estimate in 2016 was just under $80 million when the Request for Proposal Process went to bid initially, in 2019, that price tag jumped to $111.4 million. Higher costs for lumber, steel, concrete, especially precast concrete in the region for data centers and other uses "drove costs to curve up considerably."

Ashton added that during COVID, Comstock rebid the process with the hope that the economic slowdown would create some room. Ashton said that yielded only a $2 million savings, bringing it down to $109.1 million TPE. "And that's roughly where it sits today," he said.

Working with Comstock on some value engineering and reducing one underground level of the parking garage dropped it to a $24.6 million gap. At that point, the Town and Comstock split that gap in half between the two parties. Comstock is to address $12.3 million, and the Town is to address its share of the project gap of $12.3 million.

"Which is why we are here today," said Ashton.

Ashton said that the obligation to build out the Arts Center is the Town's responsibility. "The county has put $1.2 million toward it; the balance is the town's responsibility," Ashton said. "Funding source will depend on several factors, to include overall cost, timing, and funding demands of other capital projects."

Scott Sizer presented the economic analysis for the Board. Sizer reminded the supervisors that they approved a $1.2 million EOR funding request in June 2018, but it was not released. So, with the new request of $5 million EOR funding, the total contribution from the Board would be $6.2 million. The County portion of the project would be 5.7 percent. No commitment of funds would be for operations, solely capital improvements to the project.

The Town engaged JLL to evaluate the project's real estate evaluation. Based on JLL's March 2021 staff analysis and the County's sensitivity analysis,  the project would result in an annual increase of $886,500 in Fairfax County General Fund Real Estates taxes in the first year of occupancy. Under Town of Herndon ownership, the site provides $0 real estate taxes.

The County's payback period is expected to be in year eight, depending on the sensitivity analysis. The project would continue to generate new revenue. "It is anticipated that future revenue after Year 11 will be about a million dollars a year going forward," Sizer said.

Foust closed by saying when the Town of Herndon invests, the County benefits because the tax rate in the County is $1.15, and the tax rate in Herndon is 0.26.5 cents. "This project, in my opinion, is going to result in property value increases across the top. It's not limited to the new development," he said.

Highlights of  the current Herndon project characteristics compared to the 2017 approved project plan- The Arts Center is reduced from 18,000 square feet to 16,265, and the mezzanine is eliminated; the garage  that originally featured 761 spaces with 339 provided to the Town is reduced to 726 spaces of which 330 are reserved for the Town and it is redesigned with a reduction in one underground level of parking; the number of apartments is reduced from 281 apartments to 273 apartments. No affordable housing is included in the project.

Supervisor Penny Gross (D-Mason) asked Ashton: “Arts centers are expensive to build and maintain... Tell me a little bit more about what you envision for this arts center.”

Ashton-listed an approximate 200-seat black box theatre; community space in addition to art space as well as gallery space, and some opportunities for interactive art classes.

Gross followed up:-”How do we make our art centers available to the general public, so they don't have to go buy a ticket to go see something?”

“We have a fully programmable outdoor space... about 50 feet wide... That will be obviously free to the public because it is a public space,” Ashton said. Also there will be opportunities for scholarships to that programming. 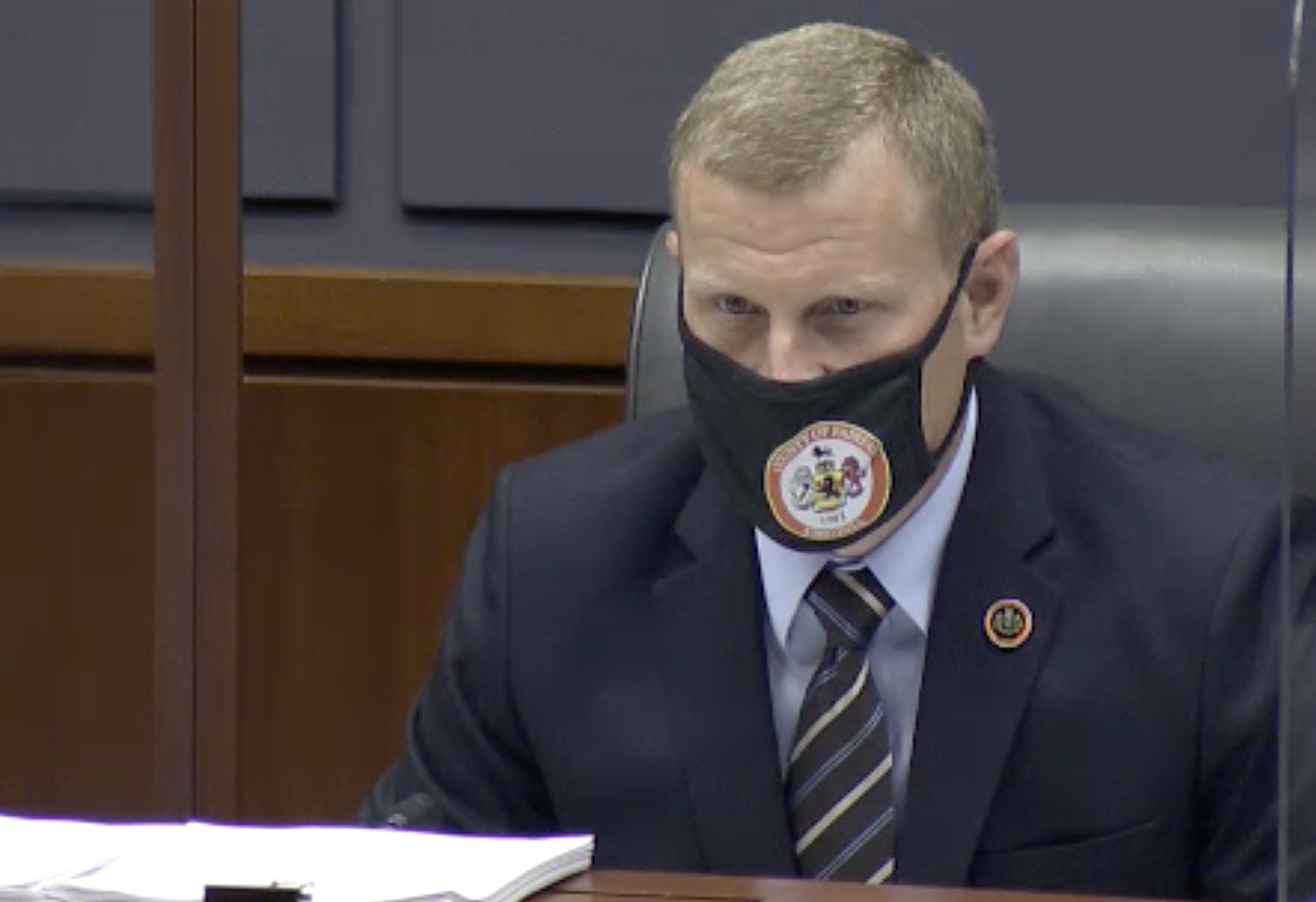 Foust- Revitalization is so important to us. This creates the type of community that will attract the 21st-century workforce, which is our goal. That's how we're going to be a successful economy going forward.

Chairman Jeffrey McKay (D-At Large)- Do we have any triggers that we can follow to ensure that progress is being made?

Supervisor Penny Gross (D-Mason)- Arts centers are expensive to build and maintain... Tell me a little bit more about what you envision for this arts center.

Ashton- An approximate 200-seat black box theatre that can be used for multiple different types of space, community space in addition to art space as well as gallery space, and some opportunities for interactive art classes… But these are going to be decisions for our councils moving forward.

Gross- You would envision an art center as being supported by the Town but also by ticket sales and things like that... How do we make our art centers available to the general public, so they don't have to go buy a ticket to go see something?

Ashton- We have a fully programmable outdoor space... about 50 feet wide... That will be obviously free to the public because it is a public space. [We can expand] opportunities for scholarships to that programming so that we can engage the community more fully.

Supervisor Pat Herrity (R-Springfield) - My question is along the lines of Supervisor Gross' question: the community use that is built into the arts center... Is there community time built into [the Arts Center?]

Ashton- It's hard to put detail behind it because the Council has yet to decide on the operating model…We would propose this be a community arts center.

Herrity- Is there a percentage of downtime or community use built into that?

Ashton- Next Stop Theatre is usually active 40 to 60 nights in any given year…I am certain that we will have downtime there for groups…The arts center belongs to the Town, and we are under contract to make it active. So, we are going to try to program it every day as possible for various needs.

Supervisor Walter Alcorn (D-Hunter Mill)- The shared parking, the 330 planned spaces, will that be free parking?

Alcorn- Traffic is pretty rough a lot of times on Elden Street. What improvements to Elden Street will be made as part of this project?

Ashton-You will see three major projects, VDOT and federally funded projects going in on Elden Street…The Elden Center Street Project takes a very off-center aligned intersection and brings it closer back into a 90-degree turn radius [and] changes some of the turn lanes… We're also doing sidewalk widening …The Monroe/Elden  Street intersection is just completing its construction, new signalization, brick sidewalks, and some other relaxed turning radii in there as well to help move through the area.

Alcorn-Are there improvements being made as part of this project as well to Elden Street?

Ashton-This project envisions a streetscape component to widen the sidewalks in that area around the project. That will be on the developer to perform... Some changes to Center Street to allow more on-street parking… We're also embracing this as a multimodal. We are embracing the bike path. We're trying to get bike facilities in there.

Alcorn- A number of residents, unfortunately, over the years, have been taken advantage of in terms of their labor, in terms of wage theft, and other issues. Is there any assurance as part of this project that will not happen? There is no project labor agreement, anything like that? ...This comes back to the Board of Supervisors to get a little more information.

Ashton-It's going to be between Comstock and their general contractor. I'm not sure what exists there on that side of the table right now.