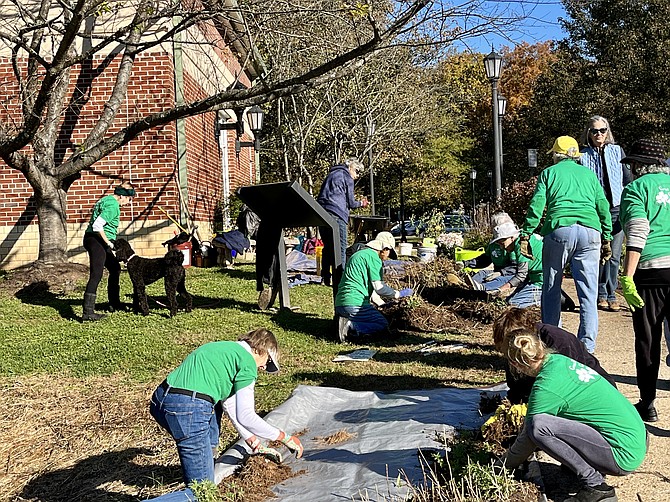 Eighty years after eight local women met for their first official Garden Club meeting in 1941, the seeds of their commitment to beautification, outreach, and education can be seen all over Great Falls. 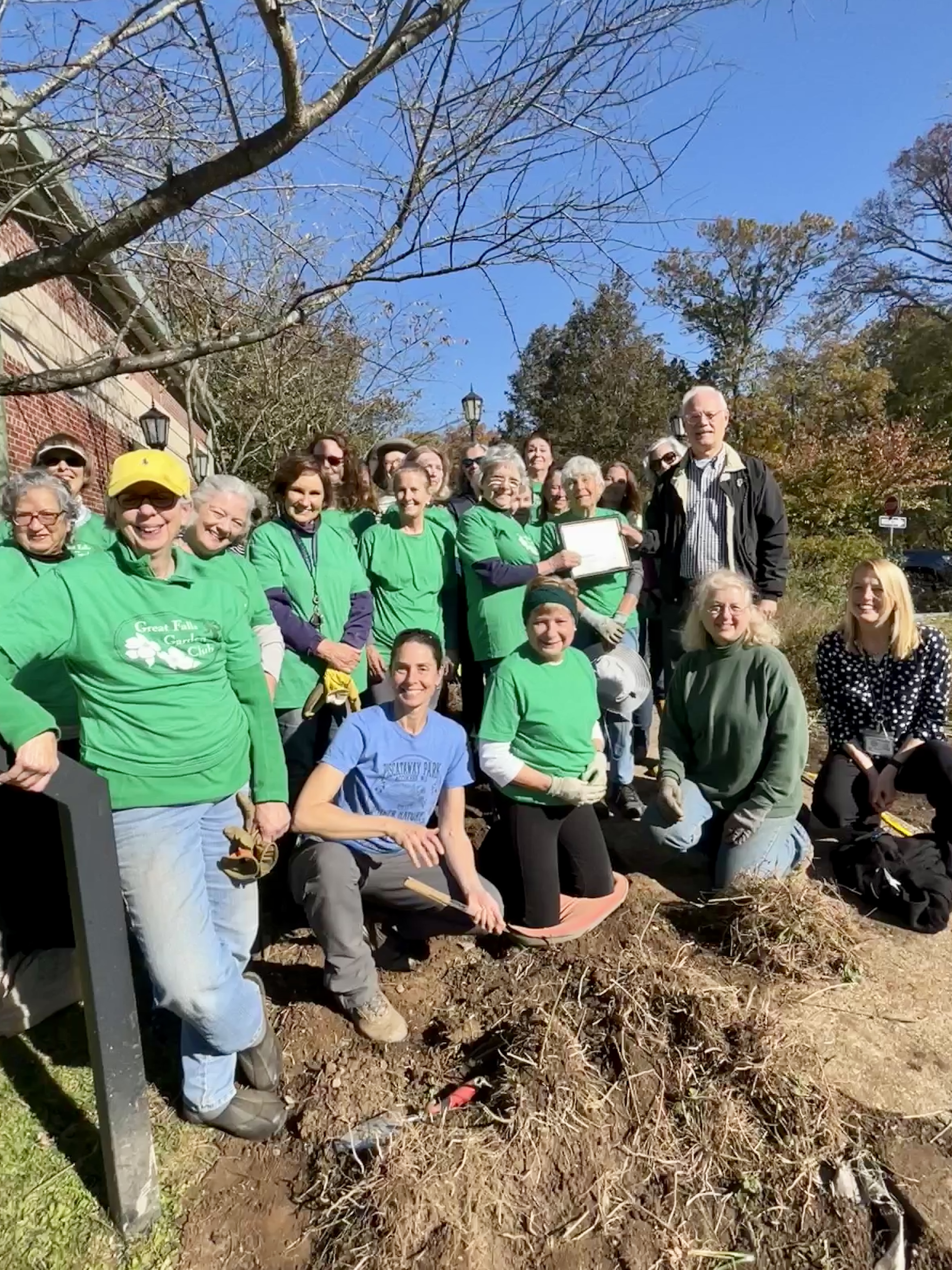 On Nov. 8, nearly thirty members of the Great Falls Garden Club gather at the Library during the organization's library garden and meadow revitalization projects for a presentation by the Great Falls Citizens Association in observance of the club’s 80th anniversary.

On Monday morning, Nov. 8, Bill Canis, president of the Great Falls Citizens Association, prepared to award the Great Falls Garden Club a Certificate of Appreciation on the occasion of the organization's 80th anniversary and recognize its service to the community.

Outside the Great Falls Library, Canis observed nearly 30 club volunteers weeding and clearing overgrowth in the Library Meadow, a 10,000 square-foot stormwater retention area in front of the library that also serves as a Monarch Butterfly Way Station and the Library Perennial Garden.

During the presentation ceremony, attended by Garden Club members and Fairfax County Librarian Melissa L. Casolini, Canis spoke of the Garden Club's visionaries who, in 1940, helped the Fairfax County branch of the American Red Cross produce wartime dressings. Following repeated requests "not to talk so much," the women formed a garden club where they would not be scolded, and they could pursue their botanical and horticultural interests.

Canis recounted key moments in the club's history, such as how members worked on a "back-breaking" trail project in what now is Great Falls Park. The 880-acre property owned by Pepco was designated as a national park due in part to the event's publicity.

According to Canis, GFCA and Garden Club members have 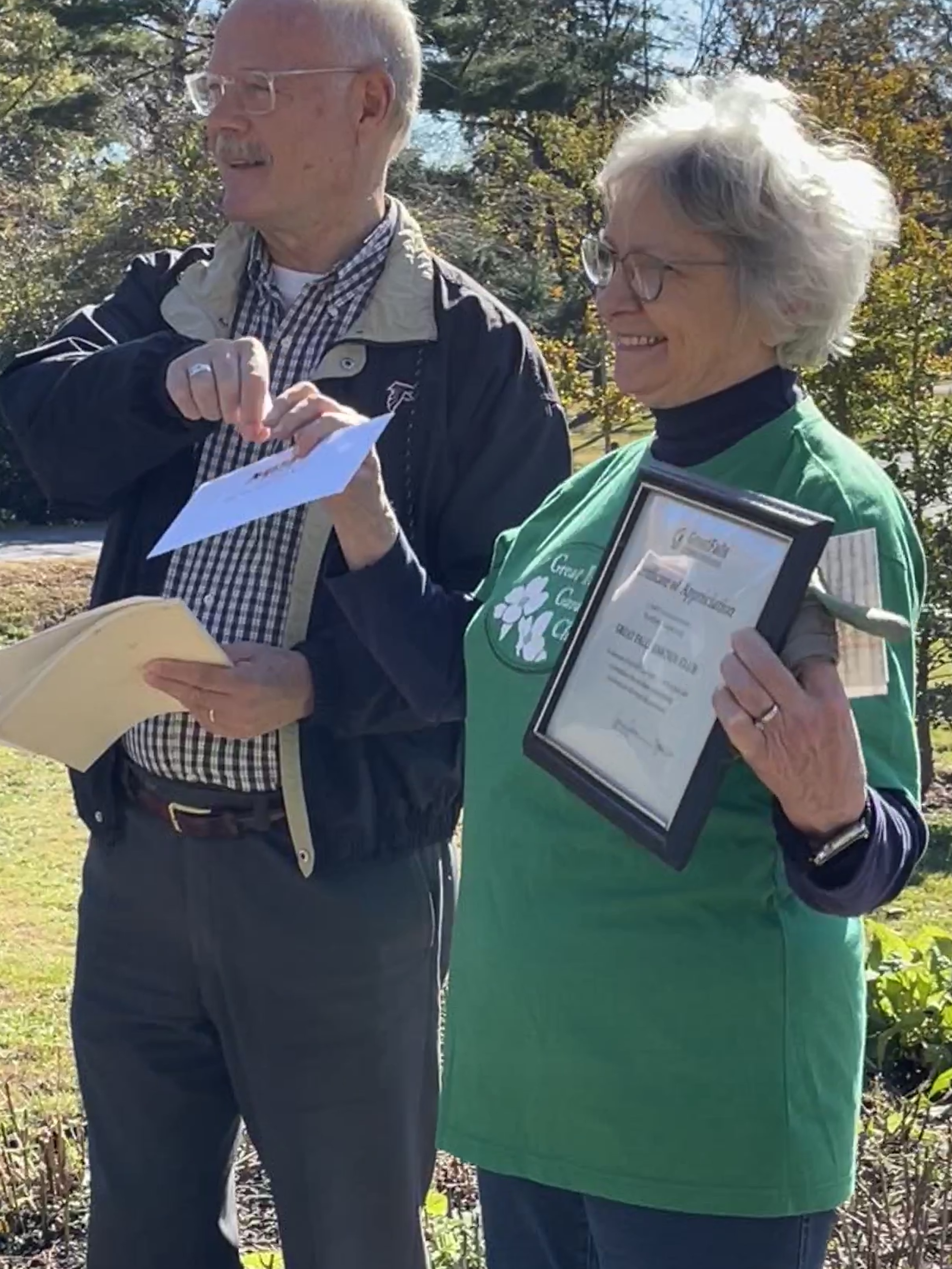 With Bill Canis, president of the Great Falls Citizens Association beside her, Jennifer Murphy, president of the Great Falls Garden Club, shows club members the award and $250 check from GFCA.
collaborated on commercial properties undergoing rezoning, such as TD Bank and BrightView Great Falls-Senior Living and Memory Care, in addition to providing horticultural support to Turner Farmhouse and the Fairfax County Fire and Rescue Station #12, Great Falls Volunteer Fire Station. As GFCA was involved in the overall rezoning issues, Garden Club members reviewed landscaping plans and made comments and suggestions for native plant use. Canis said. "The fact that you are here with your presence and keeping this going after 80 years is truly remarkable."

As he prepared to hand the framed Award Certificate to Jennifer Murphy, president of the Great Falls Garden Club, Canis said the club was the first recipient of GFCA's new award series. Canis said, "GFCA recognizes the Garden Club's outstanding service and dedication to the community on their 80th anniversary of its founding and in recognition of its exemplary and everlasting contributions to the Great Falls community." He also handed over a $250 donation check to the organization.

Murphy said the club "very much believed" in being part of the community. In terms of plans, the club wants to start a youth grant program to fund pollinator gardens in families' yards, and they are looking into a Great Falls Garden Tour. They will also have a children's activity tent at the May Plant Sale, held annually on the Saturday before Mother's Day.

From September to June, members meet at the Great Falls Library at 1 p.m. on the second Thursday of each month. Visit the club's website,  Welcome - Great Falls Garden Club, https://gfgardenclub.org/