‘It’ll Put the Audience in the Holiday Spirit’ in Fairfax

Encore presents ‘Christmas is Just Around the Corner’

The holiday season is here – time for mistletoe, twinkling lights and Encore Theatrical Arts Project’s song-and-dance extravaganza, “Christmas is Just Around the Corner.” The show runs Saturday, Dec. 11 and 18, at noon and 3:30 p.m., and Sunday, Dec. 12 and 19, at 3:30 p.m., in the Richard Ernst Theater at NOVA’s Annandale campus, 8333 Little River Turnpike.

Tickets are $22-$30 at www.Encore-tap.org. Call 703-222-5511 for group tickets and the Girl Scout special, including a behind-the-scenes tour, pre-show dance class and discounted tickets. (The audience must wear masks).

The cast of 30 has been rehearsing since August and includes adult guest performers Allen McRae as a toy-shop owner and Lorraine Magee – who also wrote the script – as an ominous visitor. 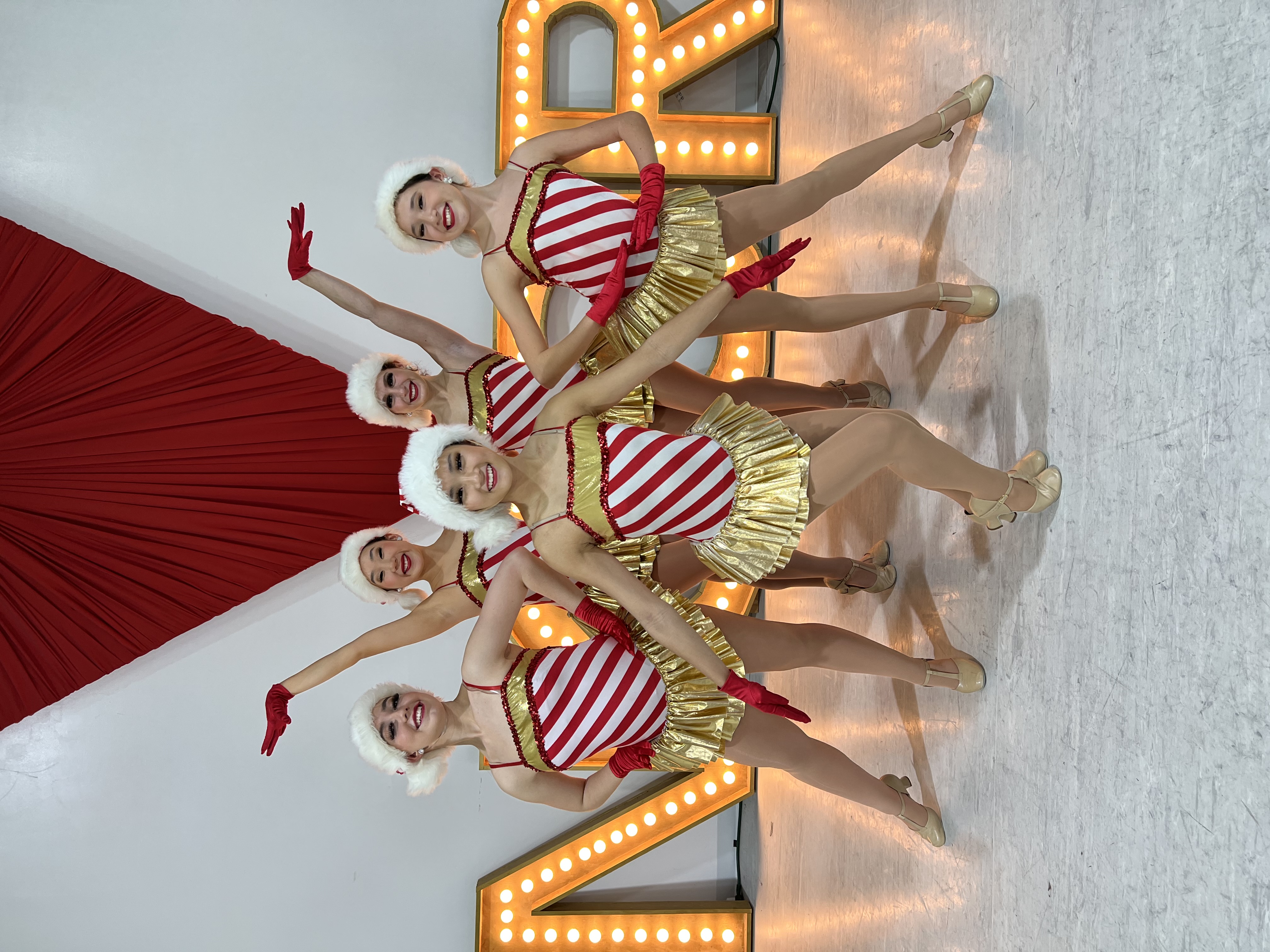 “This show is so extra-special,” said Director/Choreographer Raynor van der Merwe. “After not being in the theater for so long, we have such an appreciation to be able to be onstage again.”

In the story, the residents of Centertown are known for their holiday celebrations. But when a new person comes there, they’re not sure her intentions are honorable. So they have an undercover – although inexperienced – elf investigate her. Everything works out in the end, though, with help from Santa, more elves and the reindeer.

“This family-friendly show will appeal to all ages,” said van der Merwe. “People will hear Christmas songs they know and ones they don’t and will go on a journey in a story with a happy ending. And that’s something we all need right now. It’ll be uplifting and optimistic, with beautiful sets and costumes. It’ll put the audience in the holiday spirit, and the songs and dance numbers will have people singing a cheerful tune as they leave.”

Becca Perron plays Patti, the undercover elf from the North Pole. “She’s new and slightly ditzy, but has a positive attitude and is there to do her best,” said Perron. “She originally worked in peppermint production, but it wasn’t as prestigious as she thought it was, so she’s excited about her new assignment and unaware of her shortcomings.”

Loving her role, Perron said, “It’s fun playing someone so ridiculously positive in any scenario.” Her favorite song, which she sings with McRae, is “Our First Case,” in which Patti is convincing him that she can do the job and, together, they can save Christmas in this small town.

“People haven’t gone to theaters in quite some time, and seeing this show is a great way to support our local theater community,” said Perron. “For many years, we’ve been happy to bring this youthful, fun, Christmas spirit to Northern Virginia, and our excitement to perform this show has only grown. We can’t wait to see audiences again and share with them all the holiday joy this show will bring.”

Faith Chun, who attends Trinity Christian School in Fairfax, portrays Dani, a teen girl who befriends Patti. “She’s sassy, but mature, and likes to hang out at the coffee shop, talking with her friends,” said Chun. “There are lots of things I can do with this character to make her lines funny and exciting.”

She especially likes the ‘Multiplying Santas’ number because it’s “unique, high-energy, fun to watch and joyful. And there’s so much style in it, with different nuances within the dance and things to see at all times.” She said the story grabs the audience’s attention “because of how the characters are portrayed and how the dances go with it. And we’re all so joyful to be back onstage that we’re bringing lots of positive energy to this show and really bringing the Christmas spirit.”

An Encore dancer since fourth grade, Vilas Iyer plays Phil, of North Pole Mission Control. “If anyone anywhere has an emergency, he’s on it,” said Iyer. “He receives requests and sends help. He’s relaxed and doesn’t panic; he knows mishaps happen, now and then, but the North Pole can take care of it. I like this role because, although there’s a crisis, Phil’s laid back and a calming influence.”

Iyer’s favorite song is “Happy Holidays,” which opens the show. “It sets the tone for the entire production,” he said. “It’s energetic, rhythmically challenging and athletic. All the show’s dances are so magical and fun to watch unfold onstage. The audience will absolutely love them all.”

Sean Keim, with Encore for 10 years, portrays Beanie, a barista in the coffee shop. “He’s chill, but friendly, and can be sarcastic but easygoing,” said Keim. “He interacts with the customers and has a run-in with the mysterious visitor. I’m excited to be able to not just dance, but also play a part – a full, rounded character. And I love Starbucks, so this role was made for me.”

He especially likes the finale because “It’s a grand production after the story’s been resolved and we’re all dancing happily. Each dance group is highlighted, and there are some fun lifts, turns and jumps that make it a fun and lively number.” Keim said people will enjoy the characters’ interactions with each other, whether speaking or dancing. “They really bring this show to life,” he said. “They’ll also love our special, blacklight number and the snow falling onstage.”

Zoe Zarnegar plays Sally, director of the town’s choir, which sings and dances a couple numbers. “She’s a little bossy, but is just trying to do her job,” said Zarnegar. “She makes everyone happy, while still getting things done. And she also sings with the choir as a senior member. I like playing her because I sing, too, and can relate to her. And I like feel comfortable leading groups of people.”

“Curtain Tap” is her favorite number because “We tap dance while wearing character slippers and pajamas, and you can only see us from the knees down. It’s as if the characters of the slippers are dancing.”

Overall, said Zarnegar, “There’s a wide range of cast members, so it’s fun to see that variety. Every scene is heartwarming and there’s a lot of humor. And hopefully, this’ll bring back the Christmas cheer we didn’t have last year when everyone was stuck inside.”