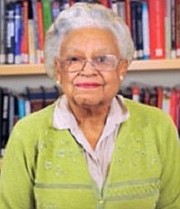 Dr. Nancy Durant Edmonds, daughter of noted Alexandria doctor Oswald Durant, died unexpectedly at her home in Plainfield, N.J. at the age of 92.

Nancy Agnes Durant was born in Alexandria on March 24, 1928, the second of two children born to Dr. Oswald Durant and his wife Helen.

Oswald Durant was one of the first African American doctors in Alexandria. For many years he was denied practice at the local hospital because of segregation, which forced patients to show up at his home in the middle of the night to be treated for their injuries.

Durant Edmonds was raised in Alexandria and followed her father’s footsteps into the medical profession. She received her B.A. and M.A. from Radcliffe College in Cambridge, Mass., in anthropology, and M.D. from Boston University. She completed her internship in medicine at New England Center Hospital Boston, Mass., 1953 and received her National Board Diploma in 1954.

From 1954 to 1957, Durant Edmonds completed residency in Psychiatry at Boston V.A. Hospital and was awarded both a training and teaching fellowship from Harvard Medical School.

Like her father, Durant Edmonds was a pioneer from an early age. In 1944, at age 16, she was the first person of color to be a finalist in the Westinghouse Science Talent Search, run by Society for Science & the Public in Washington, D.C. She finished top 10 out of 1,000-plus applicants.

On Aug. 27, 1966, Durant Edmonds married Clyde Edmonds. Together they raised a son, David Douglas Edmonds, who was born in 1970.

Durant Edmonds held various professional appointments throughout her career, primarily in New Jersey where she had settled following her medical training. She served as examiner for the American Board of Psychiatry and Neurology and in 2003 was named Psychiatrist of the Year by the New Jersey Council of Child and Adolescent Psychiatry.

Durant Edmonds maintained a private practice until her death on April 11, 2020. She was preceded in death by her husband, Clyde Edmonds; her parents, Dr. Oswald and Helen Durant, and a brother, Oswald Durant II.