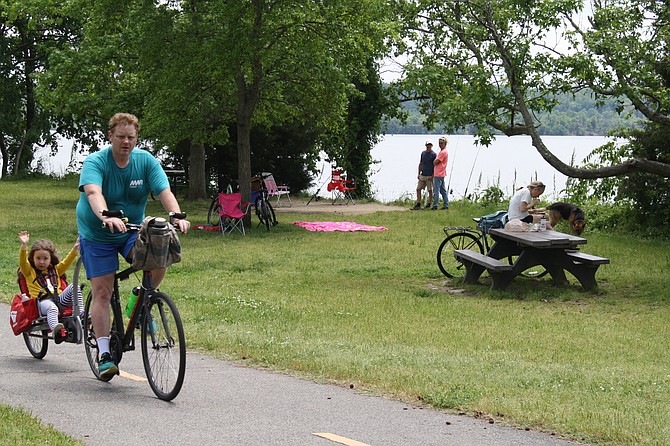 A variety of trail users is identified on the study as a challenge to planners. Photo by Mike Salmon.

In May 2020, the “Mount Vernon Trail Corridor Study,” was completed to identify opportunities to improve the Mount Vernon Trail, looking at safety concerns, users’ needs, and resource management considerations.

The National Park Service tasked the U.S. Department of Transportation Volpe National Transportation Systems Center (Volpe Center) to assess the design, condition, usage, and crash history of the Mount Vernon Trail. The analysis is intended to inform park operations and maintenance needs, as well as identify short- and long-term capital projects to improve the visitor experience, the report stated.

The George Washington Memorial Parkway office is a unit of the National Park Service who owns, maintains, and operates the 18-mile Mount Vernon Trail from George Washington’s Mount Vernon Estate to Theodore Roosevelt Island, linking Fairfax County and the City of Alexandria, to Arlington County and major Potomac River bridge crossings into the District of Columbia.

Major findings of the study include:

Since the trail was created in the 1960s and 1970s, the development of the trail predates modern multi-use trail design standards, so many of the improvements are designed to bring it up to modern standards.

In conclusion, there are short, mid and long-term improvements that need to be made. Short term includes bridge improvements, signage and coordination with neighboring jurisdictions. Mid term is to refine the scope of improvements, hire a trail manager and institute a maintenance program. Long term improvements include a few spots for rehabilitation in all three zones and eliminating an “S” curve at Daingerfield Road. There were no solid dates for projects to be completed in the study but the dates for long term, for example, were 2024-2030.