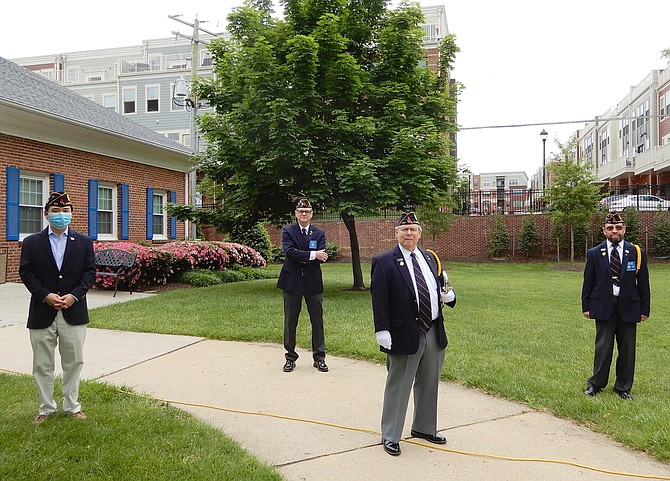 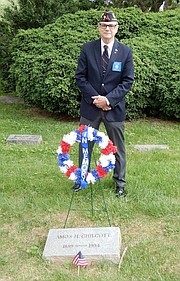 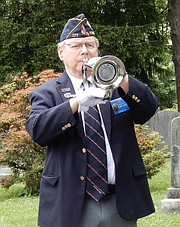 Normally, Fairfax City officials, residents, and various politicians gather for a Memorial Day ceremony. This year, COVID-19 prevented it from happening, but a small group from American Legion Post 177 still made the day special.

There were just six members – standing far apart – yet they held a heartfelt and meaningful remembrance outside their building. Speaking first was Post Commander Jeff White.

“Today we honor our war dead, throughout the years – those that have made the ultimate sacrifice,” he said. “In keeping with the dual nature of this holiday, we begin with our heads bowed in the morning. Then in the afternoon, we have a burger and a beer and enjoy our families, just as those who died would want us to do.”

Next, Post historian and color guard member Gerry Lemnah played the bugle while fellow color guard member Earl Seay raised the flag. It had been flying at half-mast to honor all the COVID-19 victims, but was raised the day before the ceremony. For Memorial Day, Monday, May 25, it was lowered again at dawn and raised at noon.

Afterward, the Post’s 2nd Vice Commander, Fairfax City Councilman Sang Yi – who’s also a lieutenant commander in the U.S. Navy Reserve – addressed the group. “It’s obviously a little different, the way we’re recognizing Memorial Day,” he said. “Usually, we’re at Fairfax City Hall, reading out loud all the names of those who have fallen who were residents here.”

“Almost 600,000 veterans have died in combat, and today’s the day we remember and honor them,” continued Yi. “And we honor them for a purpose, because none of those men and women should have ever been thought to have died in vain. They died for one, sole purpose – a belief in our country, our way of life and in the work of those they left behind.”

The whole point of Memorial Day, he said, is to remember those who’ve died serving their country. “We, the living, have an obligation to ensure that we live a life worthy of the sacrifices that our brothers and sisters in uniform have made for us,” said Yi. “I know this is a challenging time for a lot of people, and this is particularly a good reason why we need to appreciate our fallen and what they’ve given to us.”

Then, after a moment of silence, attendees drove separately to Fairfax City Cemetery to lay a wreath on the grave of Amos Chilcott, who fought in WWI and came home to Fairfax. “He was a farmer,” said White. “And in 1944-45, knowing what the guys coming back from WWII were going to be facing, he wanted to do something, so he donated the land for American Legion Post 177. The baseball field on it, Chilcott Field, was named after him; and, each year, we honor him with a wreath at his grave. God bless Amos and all our veterans.”