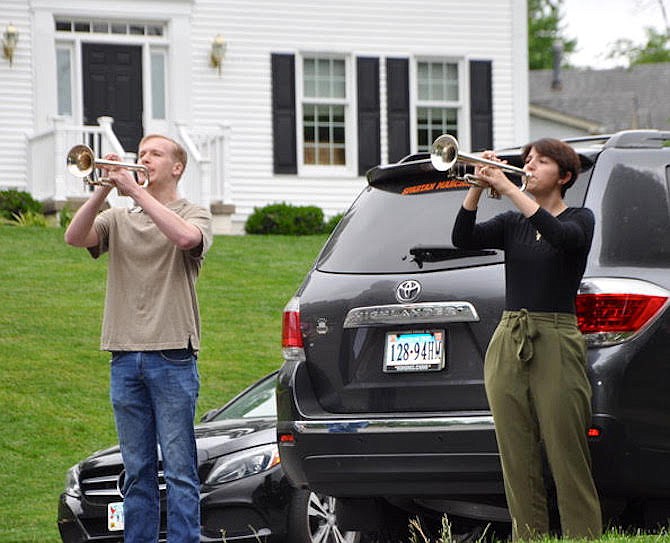 An honor of “being a part of something bigger than themselves.” Photo contributed

The Daventry neighborhood in West Springfield continued its long-standing tradition of honoring those who have made the ultimate sacrifice for our nation in a Memorial Day service. This year the service changed to adhere to social distancing rules. Local buglers interspersed through the neighborhood and played a cascading version of "Echo Taps" starting at 10 a.m. on Monday, May 25. Thirteen local musicians came together from West Springfield High School and Lake Braddock bands, Bugles Across America, Boy Scouts and the community. The buglers, spread 500 to 700 feet apart throughout Daventry, passed the call by sharing the first and last bars of Taps for a moving remembrance that wound through the neighborhood and touched all those who witnessed the ceremony and those who participated. Daventry Board member David Edwards said, “I cannot begin to say how moving this was. Thank you to all of the volunteers and to each service member and their families who have fallen in the defense of this great country.” Buglers met for the first time just before the service and were inspired by organizer and long-time Daventry resident USN Navy CAPT Ret. Craig Wevley as he announced, “This is one of the great honors of being a trumpet player; being able to sound Taps. This performance is going to bring a memory to many folks here in this neighborhood who are in the military, veterans, and serving the government. We have a few here in the neighborhood who lost loved ones on 9/11. This is a very important day for our neighbors and for ourselves.”

Troy Burke, West Springfield High School senior who will join Texas A&M's Corp of Cadets and Air Force ROTC in the fall, said of participating, “This was an important opportunity for me to be a part of something bigger than myself and remember those who have sacrificed for our freedoms. Many people came out to the street to thank us and applaud and I just didn’t expect that.”

After the buglers met for a distanced group photo, Andrew Egerstrom, who recruited buglers from West Springfield High School, proposed an encore performance in his nearby neighborhood and the buglers jumped at the opportunity. Wevley’s hope is that this concept will continue and spread to other neighborhoods and communities and that local trumpet players, young and old, will be inspired to use their talents to honor those who made the ultimate sacrifice.