Graduates cobble together a memorable event despite virus. 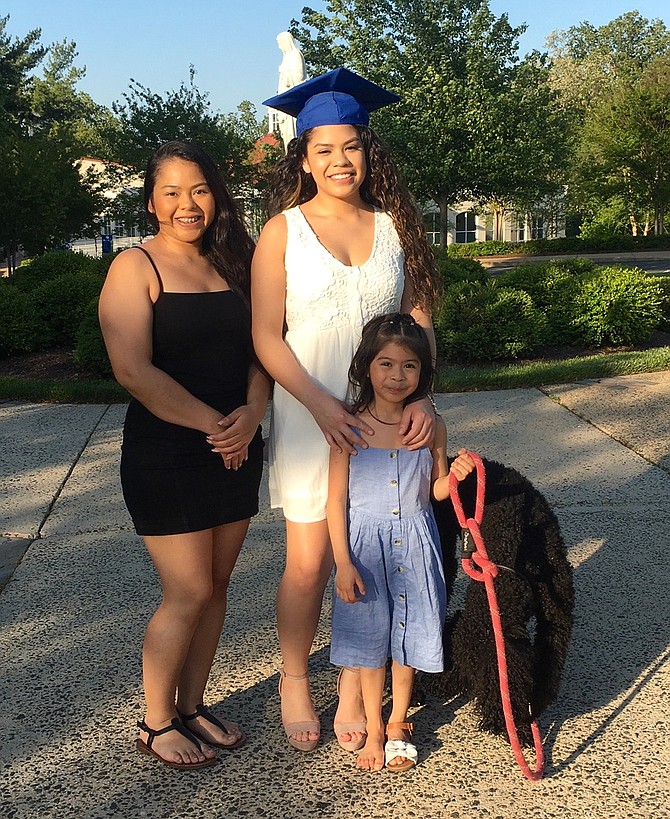 Evelyn Esteban, center, of Arlington, wasn’t going to let a virus stop her from the traditional photographs of her on campus in cap and gown. Esteban majored in Psychology. She will follow up her degree with further study of Industrial Psychology. Her sister, Karen, accompanied her as did Evelyn’s daughter, Adrianna, 5. Esteban was all smiles as she enjoyed the moment. A single mother and the first person in her family to graduate from college, she was feeling very proud. She said it was hard during the last two months with “zoom” classes and isolation, but she made it. Photo by Eden Brown. 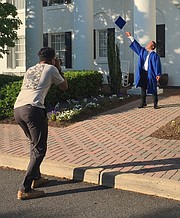 Joseph Azurine tosses his cap in the air to celebrate his graduation from Marymount University. An I.T. major from Fort Washington, MD, he plans to apply for government jobs and remains optimistic the process won’t be significantly slower with pandemic delays. His friend, Imai White, who had already graduated and had a job, was his photographer for the session.

A few ebullient graduates, keeping social distance, came to the Marymount campus on Saturday to pose for “graduation pictures,” even going so far as to throw their mortar boards in the air and catch them to simulate one of the great joys of finally receiving a degree. They all had the same graduation glow. That, and virtual graduation speeches from figures like Oprah Winfrey and former President Barack Obama, made the day almost as much a traditional graduation as it would have been…without the pandemic.