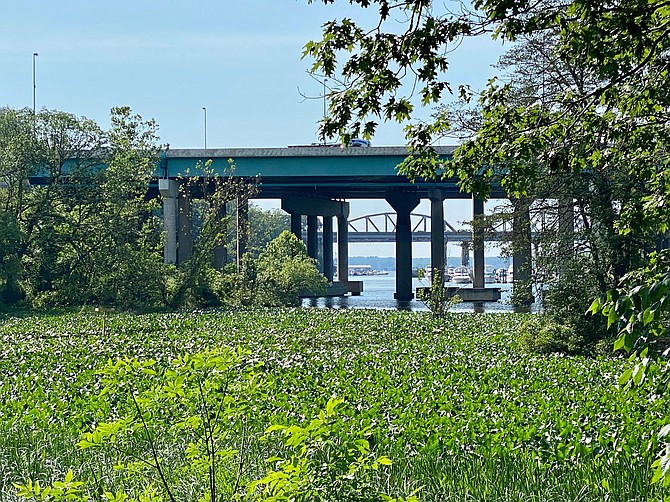 Acquired acreage includes woodland and wetlands in Lorton near I-95. Photo by Susan Laume/The Connection 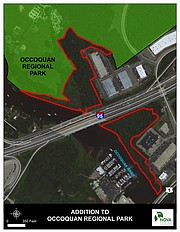 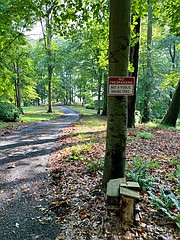 Land purchase will move land at Pohick Bay from private to public access.

NOVA Parks will mark the acquisition of land to add acreage to two existing parks with ribbon-cutting ceremonies: this week at Occoquan Regional Park, in Lorton, and later, in July, at Pohick Bay Regional Park, located on Mason Neck.

At the Occoquan park, land donation by a commercial real estate company will add 32 acres and a half mile of shoreline. The newly acquired land, which abuts the current park, provides a logical extension of the park, according to Paul Gilbert, Executive Director, NOVA Parks. Gilbert notes that while no plan has been adopted yet for its development, it will likely be best suited to natural surface and boardwalk trails rather than an extension of the nearby paved loop trail.

Previously used as temporary warehouse space, the property is no longer needed by Colchester Land Company after completing its nearby office park project. The property is not considered viable for commercial or residential development due to its steep slope, wetlands, and the shoreline set back requirements. However, it’s perfectly suited to NOVA Parks’ mission “to offer scenic, quiet, green spaces”.

A few miles away, at the Pohick Bay park, the second of two private residential properties that predated the park will join the public space. Closing on this second lot is expected in July. State and federal grants worth about one million dollars, along with approximately $300K from NOVA Parks capital fund, will allow for purchase of the Lott property. Gilbert notes that a private owner purchase was possible. Instead these sales to the park, as conservation measures, “will keep them natural.” While houses on the properties will not be immediately removed, acquisition of the Lott property “opens the potential for improvements and expansion of the smaller camping area adjacent to it,“ Gilbert told The Connection.

The Lott and Stribling properties had retained private ownership and access through the park since the park’s inception about 60 years ago. The Stribling property was purchased by NoVA Parks in 2018 valued at $2.1 million (see Connection, April 19, 2018). Both purchases were made possible through a series of conservation grants from the Land and Water Conservation Fund, as well as the Virginia Land Conservation Foundation. Over 15 years, NOVA Parks has added about 2200 acres to the regional park system serving the counties of Arlington, Fairfax, Loudon, and the cities of Alexandria, Falls Church, and Fairfax, through easements, grants, donations, and purchases.

The Occoquan Regional Park received a major upgrade in 2018 (see Connection, July 24, 2018), with over $15 million in improvements. The rebuild included a new visitor’s center with event space and cafe, a new seawall, and a 5K paved loop trail. The site anticipates the opening of the only national memorial to the suffragists’ movement later this year, now under construction opposite the visitors’ center.

The Regional Park system on the southern border of Fairfax County encompasses approximately 34 miles of nearly contiguous parkland. Beginning at Bull Run Regional, park land continues through Hemlock, Fountainhead and Sandy Run, a scholastic rowing facility, for a 20 mile, 4,000 acre block of parkland. After a gap with the Vulcan Quarry, Fairfax County Water, and a few private residences, the Occoquan Regional Park begins, running along the river shoreline. NOVA Parks notes that park usage has increased substantially since the pandemic as citizens seek exercise and relief in the park system’s natural settings.