George Floyd on Our Minds in Montgomery County
Votes

George Floyd on Our Minds in Montgomery County

Police use of force incidents in Montgomery County involve African Americans 55 percent of the time, even though they make up just 19.9 percent of the population. 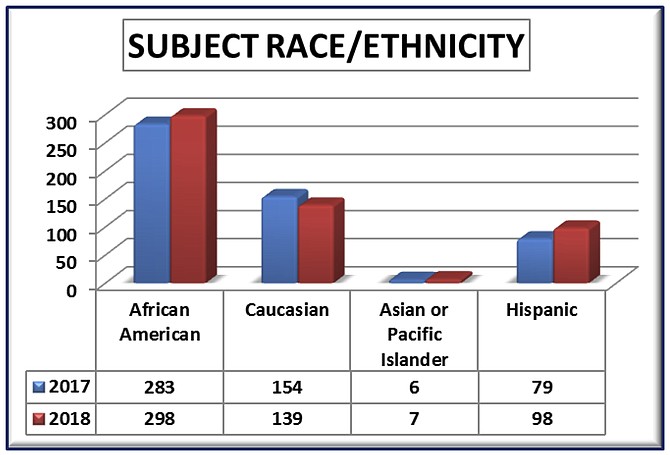 While protests spread coast to coast, and local law enforcement condemn the death of George Floyd in police custody in Minneapolis, data show that police use of force locally targets African Americans disproportionately.

In 2018, Montgomery County police officers were dispatched to 219,162 calls for service, made 18,592 arrests, and force was reported used in 542 incidents, according to the Montgomery County Police Annual Use of Force Report for 2018, the most recent available.

Latinos also make up 19.9 percent of the county, according to the Census, and were subject to 18.1 percent of the police use of force incidents, 98 of the 542 reports.

“In 2018, there were 491,700 contacts between officers and community members. Of those contacts, there were 510 use of force incidents which equates to 0.10% of the total contacts,” according to the Fairfax County Police report.

The report indicates that police use of force incidents involved caucasian subjects in 186 incidents, 36.5 percent; 61.1 percent of the county population is white.

Asian subjects were involved in 17 use of force incidents, 3.3 percent, while they made up 19.5 of the county population.

“To watch a person’s life be slowly and callously taken away before our very eyes shakes the core of committed and dedicated police officers.”

ALL JURISDICTIONS CONDEMNED the murder of George Floyd in Minneapolis.

“I was saddened and angered to watch the video circulated recently which depicted the death of George Floyd in Minneapolis,” said Chief Marcus G. Jones, Police Chief of the Montgomery County Department of Police. “To watch a person’s life be slowly and callously taken away before our very eyes shakes the core of committed and dedicated police officers. I am also frustrated. I am frustrated because I know this incident will be a brush by which our entire profession will be painted and it was an inhumane act.”

According to the Montgomery County Council, “Once again, America is in the crossfire, reeling from the pernicious effects of bigotry, racism and prejudice and from an inferno fueled by police brutality.”

“It has troubled all of us in law enforcement to observe events around this country, including what occurred in Minneapolis where the sanctity of Mr. Floyd’s life was ignored and other officers did not intervene to preserve another precious life,” said Fairfax County Chief Edwin C.Roessler Jr. “As a reminder, we have updated our use of force policies over the years using the co-production of policing model, vetted our policies and training through the Public Safety Committee, and we continue to leverage the partnerships created with community members who were part of the Ad Hoc Police Practices Review Commission.”

Roessler added: “Additionally, we are grateful for the external accountability measures from the Police Civilian Review Panel, [and] the Independent Police Auditor.

“No law enforcement officer has ever been trained to take the actions that those officers took; they have been trained to do the exact opposite,” said Alexandria City Sheriff Dana Lawhorne. “This event is a tragic reminder that we, as law enforcement officers, must do more to hold each other to the high standard of conduct that is expected and demanded by those we serve.”

“It is impossible for us to achieve our mission if we lose the trust of our community,” said Arlington County Chief of Police M. Jay Farr.

Montgomery County’s report can be found at

Fairfax County’s report can be found at