The waiting areas inside were segregated at one time. 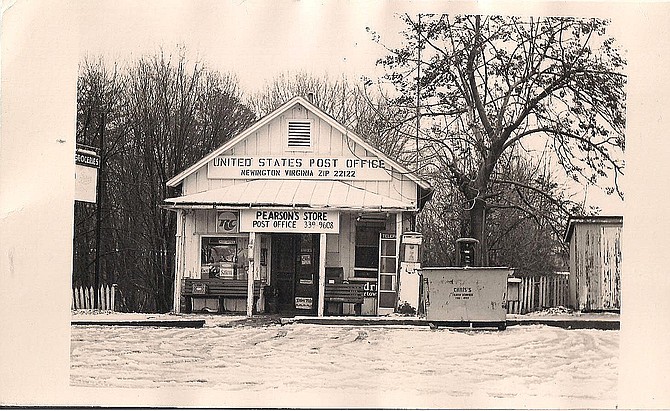 Pearson's Store was across the tracks from the station. This picture was taken in 1977.

It’s hard to say where Newington is these days, with all the buildings and roads slicing through the area, but at one time, a train stopped at the 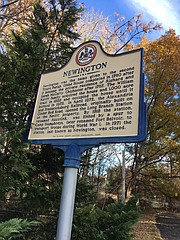 Newington had a train station.

Newington station, and folks would hike up to Pearson’s store next to the station for a soda pop. The train would pull into the station, passengers would get on and get off, just like commuters these days, and life went on.

Train travel was a big part of life in this area, and there were stops all along what is now I-95, but life at the Newington station, which some called the Long Branch Station, ceased to exist on June 1, 1971 when it was torn down. According to a Fairfax County Inventory of Sites Report, the “Newington Station was important in the transportation of troops to and from Camp Humphreys (now Fort Belvoir) during World War I and from the same facility during World War II.” This document is dated Oct. 26, 2007, and it said the Fairfax County Park Authority relocated the building “however no one in Park Authority today has any knowledge of the building,” it read.

The tracks were relocated and Pearson’s Store lived on for a while longer, but now the site where both structures were located doesn’t show much signs of life. It is close to the one-lane bridge on Newington Road and Cinder Bed Road. There are old railroad tracks that venture off to the side where the station was located, and some tires and other car parts dumped there.

The train station was built in 1872, as was Pearson Store, which later housed the Newington Post Office. There is still a Newington Post Office up the hill from the station site, across from the oil storage tanks. The building was 24.5 feet wide and 70 feet long, built of “vertical board and batten design,” and belonged to the Alexandria and Fredericksburg Railroad Company. “According to residents of the area, there were originally two waiting rooms: the one on the north end was for African-Americans; the other on the south end was for whites,” the report said. It was referred to as a “historic structure,” in a few instances on the report. A Fairfax County historic places sign is currently located in the Newington Park about 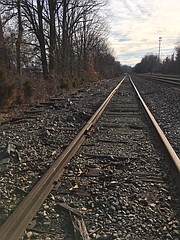 The tracks aren't being used anymore, but they are still there by the one-lane bridge on Cinder Bed Road.

one mile from the former station location.

A “Mrs. Fahringer,” tried to save the structure, according to a letter dated Jan. 22, 1972 but she was too late. It had already been partially demolished.