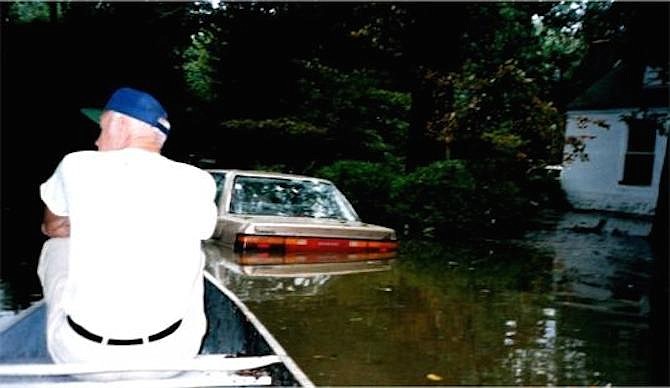 In December 2019, the owners of the Belle View Shopping Center submitted to Fairfax County a proposal to change the comprehensive plan to allow a large mixed-use development to replace the current shopping center.

The owners propose to maintain some retail presence and to build 850 to 925 multifamily units and 30 to 50 townhouses.

There are several problems with this proposal.

The proposed density is appropriate for a neighborhood that is a five minute walk from a Metro stop, but this site is a little over two miles from the Metro, a 40 minute walk, which includes a half mile of Ft. Hunt Road that has no sidewalks. It is not close to the Metro. If built as planned, it will result in much more traffic on roads that are already overloaded.

More than half the site is in a FEMA designated flood plain and almost half the site flooded during Tropical Storm Isabel in 2003. I took the accompanying picture on the morning of Friday, Sept. 19, 2003. My neighbor and I paddled to the shopping center, over H Street, over 13th Street, over the back parking lot, and we made landfall on the breezeway that opens to the back parking lot (see picture).

Increasing density in a flood plain is a bad idea in an era of rising sea levels, stronger hurricanes, and increasingly heavy rain.

West Potomac High School is bursting at the seams with students and Belle View School is still being renovated. Adding hundreds more students to schools that are at or over their capacity is a bad idea.