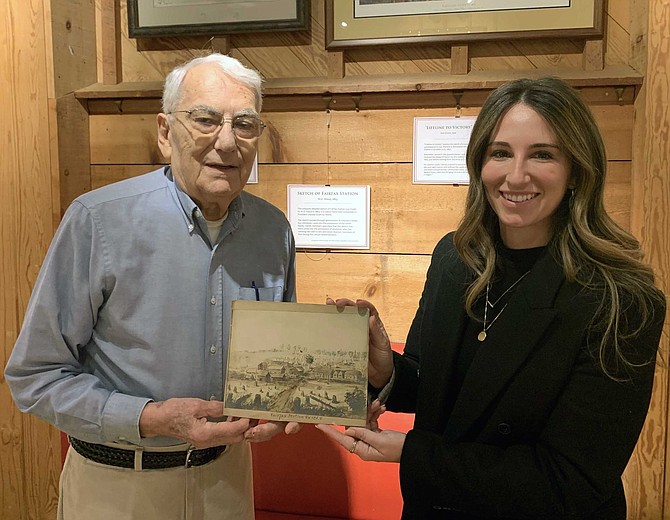 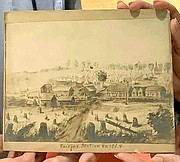 On Friday, Jan. 23, 2020, Kayla Gray Smith of Tampa, Fla. presented the Fairfax Station Railroad Museum with a rare and detailed sketch of the depot during the American Civil War.

The sketch was made by W.B. Wood in 1863 and shows in remarkable detail the extent of Federal forces at the depot, including supply buildings, telegraph outposts and stationed troops. Also pictured is St. Mary of Sorrows Church.

Fairfax Station was a major logistics and communications base for Federal forces during the Civil War. It was the site of a large-scale medical relief and evacuation effort in 1862 during the Battle of Second Manassas, with St. Mary’s acting as a field hospital for wounded soldiers. Visible in the drawing is the Station location before it was destroyed in 1862.

Woods is thought to have presented the illustration to President Ulysses S. Grant during a visit to New York. The sketch then came into the possession of Hiram Calkins, a noted New York journalist with ties to several notable political figures of the era including Abraham Lincoln. It has remained in the hands of family members since then. Ms. Smith is a 4th generation descendent of Calkins.

Ms. Smith said her family’s appreciation of local and national history motivated her to contact the museum for the possibility of a long-term display. “We are happy that it will be seen where these events took place.”

“We are thrilled to be able to include this in our displays,” said museum President Jack Migliaccio. “We’ve never seen anything with such detail. It is a remarkable find.”

Ms. Smith is making the loan to the museum in honor of her late father, Ernest Gray Smith II (1955~2014). Mr. Smith was in the 82nd Airborne Division.

The Fairfax Station Railroad Museum was dedicated in 1987 and helps preserve local history through its displays, activities and special programs. It focuses on the importance of railroads to regional development, the critical role of the station during the Civil War and the life of a small railroad depot. The Museum is located at 11200 Fairfax Station Road in Fairfax Station.