It needed a special-use permit to relocate to Fairfax Square. 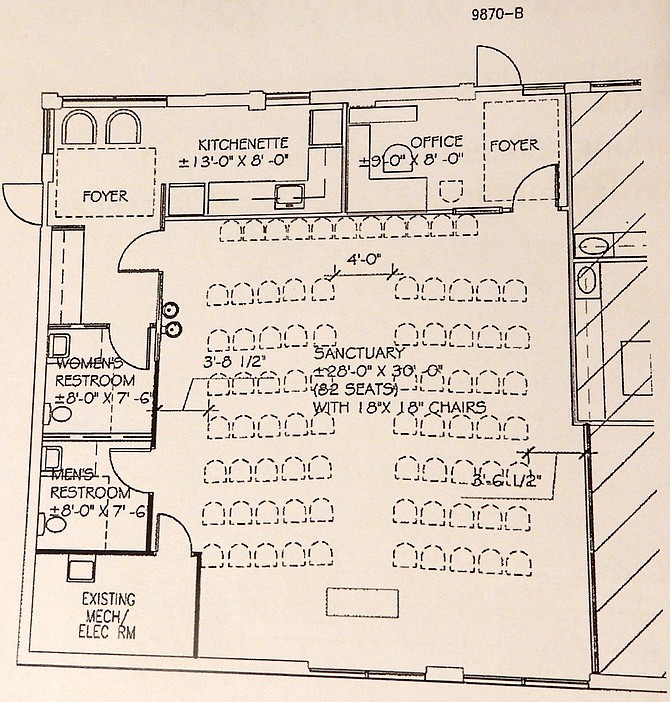 Faithful Life Church has been in the City of Fairfax since 2008 and on Democracy Lane since 2015. But changes being made to its current location are necessitating a move to another site within the City.

So, toward that end, church representatives came to a recent Fairfax City Council meeting to present details of the plan and, hopefully, obtain the Council’s blessing. And ultimately, they were successful.

Speaking on behalf of the church, land-use attorney Bob Brant said, “This building and site are well-suited for this type of use.”

At the outset of this item’s public hearing, Jason Sutphin, chief of Fairfax’s Community Development Division, explained the proposal. He said the church wanted to relocate into another office space here at the intersection of Main Street and Burke Station Road.

“They propose varied hours and days, so [drivers coming to and leaving the church] would not be [doing so] at peak, commercial-usage times,” he said. “We’d anticipate 14 weekday trips and 55 on Sunday. They typically have 30 people at their Sunday services.”

IN AN EARLIER LETTER to the City, Brant told why Faithful Life Church was requesting permission to move to a new location – specifically, to a space within the Fairfax Square commercial complex at 9870 Main St. He said the church has to leave its current site because that property is slated for redevelopment.

“Originally developed in the 1970s, Fairfax Square is a multi-building, commercial development that, over time, has been occupied by a variety of uses, including hotel, office, retail and restaurant uses,” wrote Brant. “[They’re] well-served by a total of 547 parking spaces dispersed throughout the property.”

He further noted that all but 32 of those spaces are available to all tenants on a non-exclusive basis. The church would only need 22 parking spaces – one space per four seats. And since the other uses on that site require 521 spaces, that leaves a surplus of 26 spaces.

Brant also submitted to City staff a site plan and floor plan. It showed that Faithful Life Church proposes to occupy approximately 1,565 square feet of an existing building in the northeast portion of Fairfax Square. The church would renovate the interior to accommodate its own purposes. These would include up to 82 seats for worshippers, space for the pastor’s office and a small kitchenette. No exterior modifications to the building are proposed.

THE PROPERTY, itself, is zoned Commercial Retail (CR). Religious institutions are permitted in the CR district – but only after they obtain a special-use permit from the City, so that’s why this proposal came before City Council.

Brant said the church offers its congregation a number of early morning worship services throughout the week, plus two services on Sunday mornings. It also offers Bible study classes in the fall and spring, which typically contain less than 30 people.

Only Sutphin and Brant spoke at the public hearing and, after hearing all the details, Councilman Jon Stehle made a motion to approve the special-use permit for the church. Councilwoman Janice Miller seconded, and then the Council members approved the proposal unanimously.

“This approval will allow the church an opportunity to remain in the City where it was originally established and has operated for over 10 years,” said Brant. “It looks forward to continuing its presence [here] and continuing to provide services for the members of its congregation.”