Pass or No Grade in Alexandria
Votes

Pass or No Grade in Alexandria 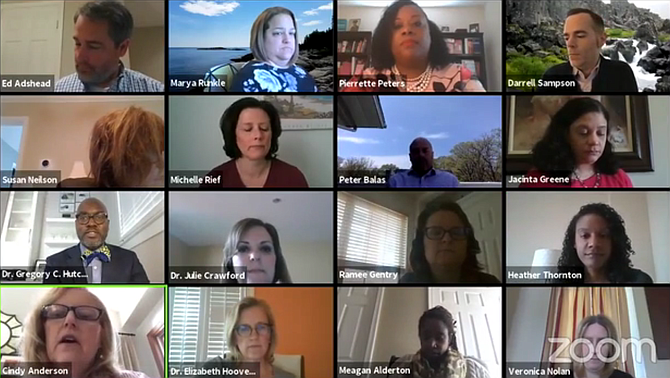 School Board members take roll call at the beginning of the online meeting on Friday, April 17. 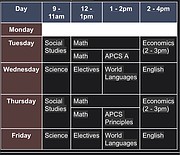 The Alexandria School Board is ditching traditional grades in favor of a new system, one in which students will either “pass” or receive “no grade.” Board members approved the new policy for grades 6 through 12 in a unanimous vote during a virtual meeting last week.

All Alexandria schools have been closed since March 16, and online learning was implemented on the same day. Teachers have been using video conferencing services such as Zoom and course management applications such as Canvas, Google Classroom and Remind to continue with instruction.

“We will be able to have that lifeline between schools and home to get the necessary support that looks differently than what it does face-to-face,” said Superintendent Gregory Hutchings. “Nobody can do face-to-face. We can’t replicate it in the schools.”

Up until last Friday, the School Board was considering a new grading policy to account for online learning and various barriers certain students face with internet access.

“All kids are going to have some form of challenge because of this experience,” said Hutchings during the board meeting, which was held over Zoom last week.

STUDENTS ARE ALLOWED to make up missed assignments for full credit until April 24 and teachers are only allowed to teach content that was already learned before the COVID-19 closure. The fourth and last academic quarter will begin April 28 without letter grades. If they complete 60 percent of the work assigned, students will receive a “pass grade” that will be recorded as 100 percent in the grade book. If students fail to complete 60 percent of assignments, they’ll receive a “no grade” for quarter four that doesn’t negatively impact their grade point average. Only grades from the first three quarters will be averaged to calculate final grades.

Final exams are being scrapped.

“One of the things I really love about this grading proposal is that it was really thoughtful about achieving a balance where students have an opportunity to improve their grade but also not penalizing students who may not have as much access or resources while we’re doing remote learning,” said School Board member Chris Suarez.

GRADING POLICY WAS controversial among high school students at T.C. Williams. Some students wanted credit for all the review assignments they were doing during the school closure so they could increase their GPAs. Other students wanted to maintain an equitable grading policy similar to the one the School Board approved.

Before the vote, students petitioned T.C. principal Peter Balas and Hutchings through email to exempt some classes from the “pass/fail” option that was originally under consideration, as they believed not having grades would hurt their GPAs and class rank.

“I was deeply concerned with the potential of a pass/fail option,” said junior Reesey DuPont, who petitioned school officials. “Allowing students to have the option to be graded for the fourth quarter for a 100 percent completion grade eases anxiety of the unforeseen future. As juniors, we don’t know what will come of the college admissions process next year, but it’s comforting to know that ACPS is in our corner.”

There are also some students who are frustrated with the lack of communication between teachers, administrators and students about the new grading policy. For the first month of the school closure before the Board vote, students were given optional assignments that did not count towards their quarter 3 grades to ensure students were still learning. However, not every teacher was clear on what assignments would be graded and how the work affected students’ grades.

“The teachers gave us too much work in the beginning, then assignments didn’t have due dates,” said junior Kate Casper, a critic of the new grading system. “Then we were told nothing could be added to quarter 3, then teachers eased up on the work and stopped giving late penalties. … The real headache here is the messiness of the new grading system. I’ve gotten the same amount of work, just my teachers aren’t expecting everyone to do all of it. The work we did for this past month is really all for nothing.”

Board members Veronica Nolan and Suarez expressed concerns about the ability of schools to reach out to and communicate expectations with all students.

Problems include food insecurity, inconsistent internet access and other barriers that prevent students from being able to engage online with their teachers.

“In ensuring that no student slips through the cracks, we’ve been keeping spreadsheets on data,” said Hammond Middle School Principal Pierrette Peters. “We’ve spoken to everyone either by phone or email making contact.”

All ACPS secondary students now have internet access and Chromebooks, according to the schools. Equitable access to the internet has been something the school system has been working on to try to ensure students are able to continue their education while school buildings are closed. They were able to identify families who did not have Wi-Fi at home and come up with a solution which involved purchasing and mailing out Kajeet personal hotspots, funded partly by Spring2ACTion donations.

At Hammond and T.C. Williams High School, teachers are contacting students and reaching out to those with grades of a C or lower in their classes.