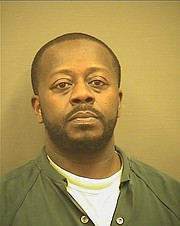 On Sept. 23, 2019, a jury convicted Daniel Kankam, a 44-year old City resident, of first-degree murder with regards to the death of an intimate partner, Somaya Hussein Ahmed. According to the City of Alexandria Office of the Commonwealth’s Attorney, the crime occurred in January 2019 at the victim’s apartment in the unit block of South Van Dorn Street.

The evidence cited at trial established that on Jan. 11, 2019, Alexandria 911 received a call from a woman reporting she had discovered her roommate, Somaya Hussein Ahmed, dead. Alexandria Police responded to the apartment, where they confirmed the victim was dead and had suffered significant upper body trauma.

Detectives were not immediately able to tell what had caused the victim’s injuries. After obtaining a search warrant, detectives conducted a thorough search of the apartment for any weapons. No firearms or cartridge casings were found. The medical examiner concluded that the victim died of an intraoral gunshot wound and that the firearm had been deep inside the victim’s mouth when it was fired. At trial, the medical examiner opined that the wound path was atypical of suicide.

The roommate mentioned that the victim was dating the defendant, Daniel Kankam. Kankam owned a security company named K-1 Tactical Security. Initially, Kankam had been the victim’s employer, but the relationship soon turned romantic. Friends of the victim revealed that her relationship with the married Kankam was extremely volatile. A cell phone belonging to the victim was seized from the nightstand inside the bedroom where her body was found.

The cell phone contained two video clips relevant to the case. One of the video clips was made on Jan. 11, 2019, at approximately 4 a,m., inside the victim’s bedroom and just minutes before her death. The video shows the victim and Kankam involved in a dispute over their relationship. Kankam, clad in security gear and armed with a holstered firearm, can be seen doing pushups on his knuckles. At one point on the video he says: “you’re pissing me off” to the victim. At another juncture, he tells her: “you should be scared.” At the end of the video, Kankam looks up and realizes he is being filmed. He appears angry and makes a movement toward the camera. The video then ends abruptly. Within 12 minutes of the end of the video clip, Kankam began sending text messages to the victim’s phone. Evidence at trial established that he sent these texts from the victim’s bedroom after her death in an effort to establish a false alibi. Additional evidence established that Kankam rearranged the crime scene to make it look like a robbery gone bad, moved the victim’s body, and removed important evidence from the scene like his firearm and a fired cartridge case. The second video clip was filmed on Sept. 30, 2018. It shows Kankam sitting on the ground in a parking lot, visibly intoxicated. As the victim argues with him about his intoxication, Kankam angrily says, “I’m about to (expletive deleted) kill you.” He then draws a firearm and brandishes it at the victim before slowly dropping the gun and re-holstering.

Kankam was interviewed by Alexandria police on Jan. 12, 2019. During the interview, Kankam denied having killed Ms. Hussein Ahmed. He gave a detailed statement that was filled with inconsistencies and blatant untruths. Many of his factual statements were contradicted by the videos and other electronic evidence such as text messages and audio files.

After Kankam was arrested, he called a family member from jail and instructed her to get rid of a bag. Police, alerted to the attempt, recovered the bag and determined that it contained evidence such as the security vest worn by Kankam in the video taken inside the victim’s bedroom, the victim’s wallet, Kankam’s Glock pistol, a fired cartridge case and two watches. Forensic analysis of these items established that Kankam’s vest was covered in the victim’s blood and that his Glock pistol was the weapon used to kill her.

At trial, the defendant testified in his own defense. He admitted that he had removed items from the scene, although he denied trying to conceal evidence. He agreed that his vest was covered in the victim’s blood and that his Glock caused her death. He also admitted he repeatedly lied to police during his interview. However, he maintained he had not killed the victim.

In his version of events, he was in the victim’s bathroom with the door closed, drinking alcoholic cider at the time of her death. The defendant indicated that he was not sure whether the victim had committed suicide or if an unknown assailant had entered the apartment, picked up his unsecured firearm, murdered the victim and then exited.

After returning the convictions, the jury reconvened and recommended that the defendant serve the following sentences: On Count One, Murder in the First Degree: 23 years in prison; and On Count Two, Use of a Firearm in the Commission of Murder, 3 years in prison. By operation of law, these sentences run consecutively to one another for a total sentence of 26 years in prison.

Virginia abolished parole in 1995. Under Virginia law, a jury is allowed to recommend a sentence to the presiding judge. However, the judge maintains the ultimate responsibility for sentencing the defendant. The judge will formally pronounce sentence at a hearing that is currently scheduled for Nov. 21, 2019. At this hearing, the judge will hear evidence and argument from the parties and may either accept or reduce the jury’s recommended sentence. The judge is not empowered to increase the sentence. The defendant is incarcerated in the William G. Truesdale Alexandria Adult Detention Center pending the sentencing hearing.