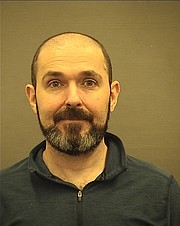 Verbatim report from City of Alexandria Office of the Commonwealth’s Attorney.

On Oct. 17, 2019, Jesse Bjerke, a 38-year old Arlington resident, pleaded guilty to Rape, Object Sexual Penetration, Abduction with the Intent to Defile and three counts of Use of a Firearm in the Commission of a Felony. The charges relate to a violent sexual assault that occurred in 2016. A statement of facts read at the time of the plea revealed the following information about the offense.

On Sept. 3, 2016, the victim was working as a lifeguard at a pool located in a condominium complex located on South Pickett Street in the City of Alexandria. The weather was cool and cloudy, and no one was at the pool.

Around 12:30 a man arrived at the pool asking if he had left his flip-flops there the day before. The victim looked around the pool area and went into a pump room where found items are stored, and the man followed her around as she did so. Having not found the shoes, the man left.

The man returned sometime after 1 p.m. and asked if they could look for the shoes again. He again followed the victim around the pool area and to the pump room. When she turned to tell the man that the shoes were not there, the man pointed a gun at her face. The victim screamed, and the man told her, “Stop screaming, or I’ll shoot you in the mouth.” The man then instructed the victim to get on her knees, and he zip-tied her hands behind her back. He put tissues in her mouth to prevent her from screaming, and he put on blue latex gloves.

The man told the victim, “I am going to rape you, kill you, or I will do both.” He again threatened to shoot her if she screamed, and he ordered her to not look at him. The victim closed her eyes.

The man removed the victim’s clothing … . He applied pressure to her throat and struck her in the head several times. … After he raped her, he got up and fled the scene on foot.

The victim was able to get out of the room 5 minutes later, and she called her boyfriend, who called the police. The first officer on scene found the victim, half-naked and still zip-tied so tightly that her hands were turning blue. The victim was transported to Fairfax INOVA Hospital for medical care and the performance of a Sexual Assault Nurse Examination (SANE). During the evaluation, the nurse noted multiple bruises and abrasions consistent with the victim’s report, to include internal injuries caused by the attack.

A DNA profile was developed from the sperm located within the victim, but a search revealed no match in law enforcement databases. After traditional attempts to identify a suspect were unsuccessful and all leads had been exhausted, the Alexandria Police Department contracted with Parabon Nanolabs to have the suspect’s DNA analyzed using genetic genealogy. Parabon investigators used a public access site called GEDmatch to search for relatives of the suspect. Using the list of relatives and the strength of the relationship, Parabon was able to suggest one suspect for further investigation: Jesse Bjerke, the defendant.

Detective Ryan Clinch of the Alexandria Police Department performed covert surveillance and collected abandoned trash outside the defendant’s home, as well as straws that the defendant left at a restaurant. A comparison of the DNA located on those items to the DNA found within the suspect’s sperm yielded a match. Upon arrest, the defendant’s known DNA sample was collected, and the Department of Forensic Science calculated the odds of randomly selecting a match at 1 in 7.2 billion, which is approximately the world population.

After the defendant was arrested, the investigation continued. The defendant’s employment records were subpoenaed from Alexandria INOVA Hospital, where the defendant had been employed as a nurse in the emergency room. The INOVA records revealed that on the day of the offense, the defendant unexpectedly left work at 8:30 a.m., just an hour and a half into his shift, claiming to be sick. A search warrant for the defendant’s phone location data revealed that after he left work, he drove around Alexandria and Fairfax County for the remainder of the morning. At 12:30 p.m., he turned his phone off, and at 12:41 p.m., he turned it back on; at that time, his phone connected with the cell tower closest to the crime scene. His phone again used that tower at 1:06 p.m., and then he turned it off again during the time period of the offense, from 1:23 p.m. until 2:15 p.m. During the precise two times that the victim reported that the suspect was at the pool, the defendant had turned off his phone—and his last known location prior to turning it off was the closest cell phone tower to the pool, located just 600 feet away.

Search warrants executed upon the defendant’s cell phone revealed that he had a specific interest in reading—and then deleting—articles about how genetic genealogy has been used to solve cold case rape offenses. A search warrant upon his email account showed that during the same time he was reading about genetic genealogy’s use of public records to identify suspects, the defendant sought to delete accounts that tracked his location and remove his name from public records databases.

The case was investigated by Detective Ryan Clinch of the Alexandria Police Department, with significant support from Parabon Nanolabs and the Virginia Department of Forensic Science. Senior Assistant Commonwealth’s Attorney Jessica Best Smith prosecuted the matter on the behalf of the Commonwealth.

Commonwealth’s Attorney Bryan Porter said: “This crime was preplanned and brutal. While I am pleased that the matter was successfully resolved, no guilty plea or sentence can right the wrongs the defendant committed or ameliorate the pain and trauma inflicted upon a defenseless victim.”

“With regard to the plea agreement there are, in effect two conditions.

First, the Commonwealth cannot ask for the sentence of ‘life in prison,’ while it remains free to argue for a specific term of years that could, in effect, equate to life. As a reminder, Virginia has eliminated parole. Second, the defendant is free to appeal the adverse ruling of his motion to suppress with regards to the collection of DNA evidence in this case. The Commonwealth welcomes such appellate review because, as the trial court decided, the current state of the law explicitly supports the collection of abandoned evidence for DNA analysis.”

“The Commonwealth notes that the genetic genealogy techniques used to break this case are an outstanding use of technology by which violent rapists are identified. While the Commonwealth understands that a balance between personal privacy and investigation must be struck, that balance is achieved when a rapist voluntarily abandons property and a search warrant, based on probable cause and issued by a judicial officer, is used to confirm his identification as the perpetrator. To put it plainly, without genetic genealogy, a violent rapist would not have been identified and this defendant would currently be at liberty, capable to rape again with impunity whenever the urge arose within him.”

“There is media interest about a possible additional charge against the defendant being brought in Fairfax County. It would be improper for my office to comment on an open investigation and I therefore defer to the Fairfax County Police Department.”

“I commend the outstanding work on this case by detectives of the Alexandria Police Department, whose dedication to bringing a violent rapist to justice is inspiring.”