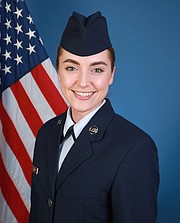 She is the daughter of Robert and Debra Loynd of Sandwich, Mass.

The airman is a 2013 graduate of George C. Marshall High School in Falls Church.