“In the era of climate crisis, making room for more greenhouse gas emitting vehicles on our roadways is irresponsible.” 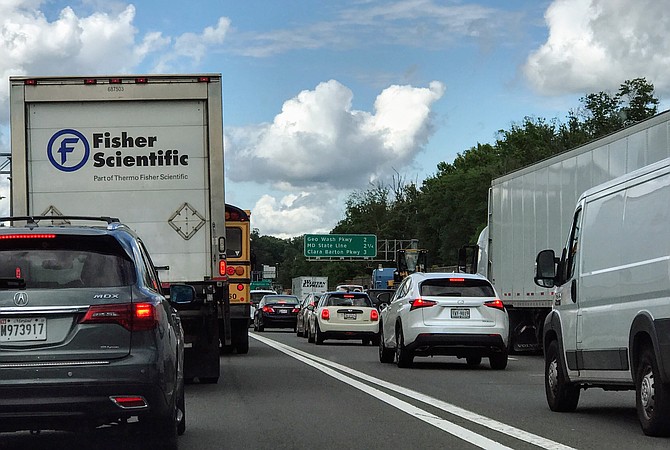 The Beltway in Virginia, where the Express Toll lanes end and merge into the regular lanes in McLean approaching the American Legion Bridge. Long backups have developed on the Beltway and down the George Washington Parkway here. File photo

Approaching the American Legion Bridge, a sign predicts it will take 20 minutes to travel the seven miles to I-270.

Potomac environmentalists were swift to express “grave concerns” over the proposal by governors Larry Hogan (R-Md.) and Ralph Northam (D-Va.) to widen the American Legion Bridge and add privatized toll lanes on the Beltway.

They didn’t mince their words, suggesting a battle inside or outside the courtroom.

They called Hogan and Northam’s pitch and plan announced at the annual Capital Region Transportation Forum on Nov. 12, 2019 “a flawed process.”

“We encourage you to refrain from rushing the process until the appropriate procedures are followed, the environmental impacts studied and alternatives to vehicular transit are seriously considered,” they wrote in a joint letter to the governors on Nov. 15, 2019. “We ask you to fulfill your legal obligations and give full consideration to these important environmental and quality of life concerns. We would welcome the chance to be part of finding a solution that is consistent with our shared desire to protect our water and lands.”

CONSTRUCTION COULD BEGIN as early as 2021, said Hogan and Northam.

“Without these improvements, our horrendous congestion will only get worse,” said Pete Rahn, Maryland Secretary of Transportation.

The project would replace the existing lanes in each direction across the Potomac River and add two new Express Lanes in each direction for approximately three miles between the George Washington Memorial Parkway in Virginia to the vicinity of River Road in Maryland, according to Hogan and Northam.

“The American Legion Bridge has been operating beyond its capacity for nearly four decades. Daily traffic has grown 390 percent since the bridge opened in 1962, with 235,000 vehicles using it daily. More than 40 percent of the region’s population travels this segment of the Capital Beltway, and the region expects to grow by another 1.2 million people by 2040,” they said.

SEVEN COMMISSIONERS of the The Maryland-National Capital Park and Planning Commission (M-NCPPC) reaffirmed its stance last Wednesday, Nov. 20 “not to concur” with the State Highway Administration’s plan.

In June, the commission voted against the plan and process “based on the lack of information needed to evaluate the selected alternatives retained for detailed study (ARDS)” and the state highway administration's “failure to address the reasons why M-NCPPC did not concur with the ARDS at the outset.”

In addition to commenting on the public value of parkland, stormwater management and water quality, The Planning Commission said “meaningful, local serving transit and transportation demand management must be integral components of the project for any of the alternatives to be studied.”

Environmental damage with 10 years of construction would be massive.

“Adding impervious surface of the magnitude of these projects will irreparably degrade water quality in our precious local streams, including Rock Creek, in the Potomac and Anacostia Rivers and ultimately in the Chesapeake Bay,” said Alexander, Belin and Braha.

“Residents will lose hundreds of acres of irreplaceable wildlife habitat, river and streamside recreational spaces, and carbon-sequestering parkland in our region’s most densely developed areas.”

“In the era of climate crisis, making room for more greenhouse gas emitting vehicles on our roadways is irresponsible 20th-century planning to address a 21st-century problem. We need to implement solutions that move people around our region with net zero climate impacts,” they said.