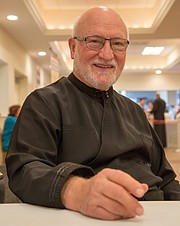 Archimandrite Joseph Francavilla, a faithful shepherd and spiritual father to many, fell asleep in the Lord Nov. 13, 2019, surrounded by fellow priests and parishioners who loved him. He was 76 years old.

Fr. Joseph served as pastor at Holy Transfiguration Greek Catholic Church in McLean since 1971, just two years after his ordination as priest of the Melkite Eparchy of Newton. Since then, he fully poured out himself in selfless service to his congregation, setting an example of genuine Christian love. He has baptized many Christians, crowned hundreds of couples in Holy Matrimony and inspired numerous ordinations.

Fr. Joseph perfected the gift of hospitality, believing in the importance of relationships. Holy Transfiguration is known in community for its annual Middle Eastern Food Festival, which was important to Fr. Joseph in sharing the beauty of the Eastern Church with the community.

His family, friends and congregation grieve his loss and are committed to follow his example in all that their beloved priest taught them.

Born Jan. 16, 1943, he grew up in Buffalo, N.Y. and is survived by three brothers: Thomas, 80, Charles, 77, and Paul Francavilla, 65. He joins his father, Joseph Vincent Francavilla, and mother, Mary Boncore Francavilla in eternal rest.

After battling pancreatic cancer for two years, he faced death with unshakable courage and deep faith and with the kind of humility, grace and class that characterized his whole life.

He will be remembered as a holy priest, a loyal friend and a spiritual father to many.

“That is about as successful a life as anyone can have,” said his brother Charles Francavilla.

Memorial contributions may be mailed to Holy Transfiguration Church in McLean.