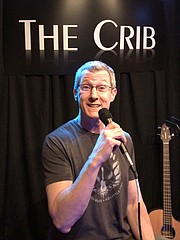 Chris Devine shows his house concert venue at his home in the Town of Herndon on Jan. 5, 2019. (File Photo)

Chris Devine, former host of The Crib, a house concert series in the Town of Herndon that featured independent musicians at his home at 759 Center Street, is done with legislative battles, appeals and frustration. While he closed the venue months ago, the battle wore on until June 28, 2019, when Judge Bruce D. White in the Circuit Court of Fairfax County reversed the Jan. 24, 2019 decision of the Board of Zoning Appeals for the Town of Herndon in Case #19-01.

Leading up to the Order, in a March 26 post on his website.cribconcerts.com titled, "The Crib Closes...What a Great Run!" Devine wrote, "Nearly 4 years, 44 shows, 33 amazing artists and over 1,400 wonderful guests! But...the Town of Herndon just kept coming at us with the claim that this house concert was a commercial activity. Even after the Town's Board of Zoning Appeals said it wasn't in a ruling on Jan. 24, the town filed suit with the County Circuit Court to shut us down. We couldn't afford the legal fees to litigate. Ouch!"

According to the June 28, 2019 Order for Case No. CL-2019-2509 signed by Judge Bruce D. White and filed in the Circuit Court for Fairfax County; Judge White ordered the Jan. 24, 2019 decision of the Board of Zoning Appeals for the Town of Herndon reversed and the Dec. 19, 2018 decision of the Zoning Administrator affirmed.

THE ORDER stated: "Based upon the default herein and that the Dec. 19, 2018 decision of the Zoning Administrator that observed concerts events are an Indoor Entertainment use and not a permitted use on the subject property pursuant to §78-50.6 of the Town of Herndon Zoning Ordinance and the proffered condition of Zoning Map Amendment ZMA #101 is AFFIRMED." The default cited in the Order read: "lack of any responsive pleadings filed in this matter."

Earlier in the year, at a public hearing of the Town of Herndon Board of Zoning Appeals held Jan. 24, 2019, Devine appealed the Town of Herndon Zoning Administrator's decision issued on Dec.19, 2018, (ZE18-01517) that the observed concerts events were an Indoor Entertainment use. According to approved minutes of the meeting, by a vote of 3-2 that evening, the Board reversed the Zoning Administrator's decision that the concerts events were not a permitted use. The reason cited: due to "the ambiguity within the ordinance and the ordinance not specifically identifying house concerts as not permitted."

Singer/songwriter Crys Mathews, of the Town of Herndon, commented on July 13 about the house concert controversy before she performed at the Summer Entertainment Series, Music at Arrowbrook Park located blocks outside of Town limits in the unincorporated of Herndon.

"I wish we were able to be playing outside of the cloud of the house concert controversy, even though this is the county and not the town proper. It's important for me as an independent singer/songwriter who depends on house concerts to stand in solidarity with those affected by the Town's decision to take the issue up with Fairfax County Circuit Court," Mathews said.

Lesa J. Yeatts, Town Attorney asked for the Motion for Entry of Default Judgment for the Town and Town's Council by David Stromberg, Zoning Administrator. Asked for comment concerning the final Order by Judge White, Town spokesperson provided the statement: "The town attorney has no additional comment."

DEVINE could not be reached for comment as of July 22. According to Fairfax County records, on July 1, 2019, Devine sold his home located at 759 Center Street in the Town of Herndon.