Stewards of the Land in Herndon
Votes

Stewards of the Land in Herndon 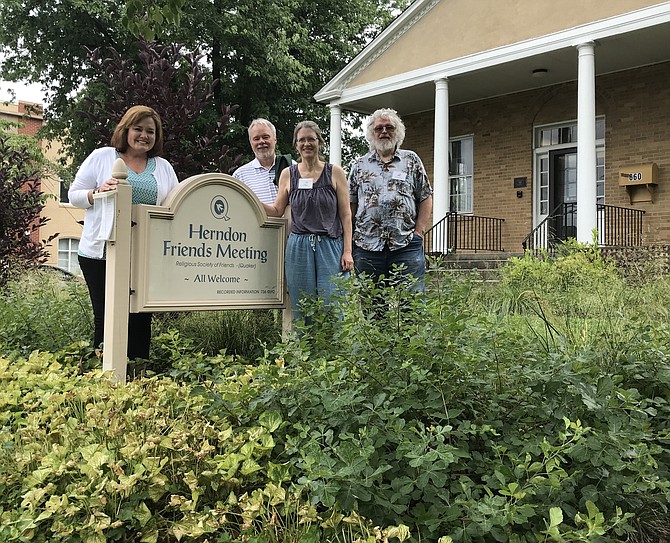 At Friends Meeting House in Herndon, worshippers Lea Wolf, Paul Murphy, Margaret Fisher and Tim McDermott stand beside one of the now thriving native gardens they and others planted late 2017. It adds form and function as it captures stormwater and infiltrates it into the soil rather than becoming runoff. Photo by Mercia Hobson.

It only took a year and a half. At the former historic Herndon Library building, located at 660 Spring Street and now Herndon Friends Meeting House, native plants flourish, and stormwater infiltrates into the soil rather than becoming surface runoff. On Dec. 2, 2017, worshippers removed the boxwoods and hard patchy turf, which grew on the property for years and replaced them with native plants that were in Virginia 100 years ago. That and more positively impacted the local watershed, Chesapeake Bay and wildlife.

Margaret Fisher, Clerk of the Herndon Friends Meeting Green Committee, explained the community of worshippers took advantage of the Virginia Conservation Assistance Program (CAP) for Places of Worship located in Fairfax County. "The Commonwealth of Virginia is providing matching grants to encourage landowners to capture stormwater on their property. One stipulation is that plants be Virginia native species. We changed impervious lawn to conservation landscaping," Fisher said.

"The native plants remind people what the ecosystem used to look like a century ago," said Paul Murphy of Herndon Friends Meeting. "We are stewards of the land. We are just borrowing it for a short time."

Tim McDermott added that once established, "Native plants also support native fauna and the butterflies and birds that migrate through such as the sapsucker." Lea Wolf said that often times, especially for small gardens like the Quakers’, owners don't appreciate the difference native plants make. "We are in the middle of another mass extinction event," she said.