‘I’ve Been Waiting for This’: First Glimpse of New Sully District Community Center 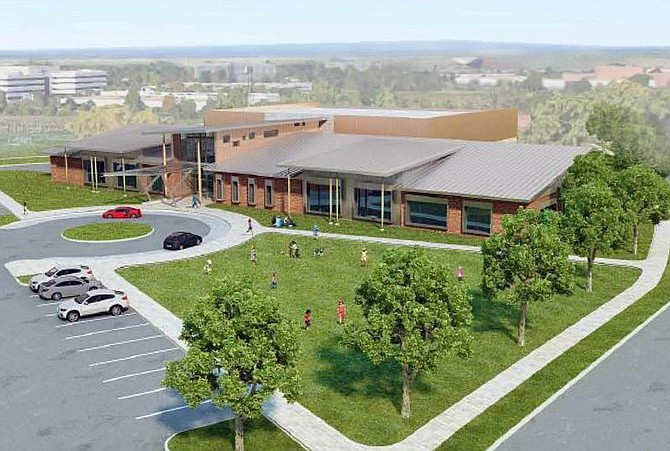 The floor plan of the new Sully District Community Center.

The site layout of the community center to be built in Chantilly.

Local residents recently got their initial glimpse of the new community center planned for the Sully District. And Hana Chang was first to address the nearly 70 people attending an informational meeting in Sully’s Governmental Center.

“We’ve been working on the design of his building, and we’re excited to share it with you,” said Chang, with Fairfax County’s Department of Public Works and Environmental Services. “It’s one story, about 30,000 square feet and is on a 5-acre site [bounded by Wall Road and Air and Space Museum Parkway in Chantilly].”

She said a 2017 community survey – to which more than 700 residents responded – guided what elements will go into this county project that has an estimated $20 million price tag. And she told residents it’s scheduled for completion by summer 2022.

Evan Braff, a regional manager with the county’s Neighborhood and Community Services, presented further details. “I live in the Sully District, so I’ve been waiting for this,” he said. “This will be Fairfax County’s 10th community center, and we want to get feedback from the community about the types of programs and services they want there.”

Braff said three multipurpose rooms are proposed for a variety of uses, as well as programs both day and evening. Also planned are an arts-and-crafts room, game room, exercise room, offices, kitchen and pantry. And moving there will be Sully District’s senior center, which is currently operating in a temporary location in another section of Chantilly.

“Seniors will be able to get a meal and transportation, if necessary,” said Braff. “We’re partnering with Shepherd’s Center, and seniors can call them for rides to doctors’ appointments and to get groceries.”

However, he added, “It’ll be an intergenerational center with programs for youth in the afternoons [after school] and during the summer. And it will provide a meeting place for groups and organizations.” This space may be used by community associations and clubs and for classes and social gatherings.

The facility will also feature a gym with two basketball courts. “We partnered with the [county] Park Authority, which gave the additional funding for the second court,” said Braff. “And the county will use it on Sundays. We’re going to have a plethora of activities serving all kinds of people, including people with disabilities.”

Since it’s geared for all ages, some examples of the programs and services to be offered include: Fitness classes; gym sports such as volleyball, pickleball and badminton; STEAM, technology and computer instruction; therapeutic recreation; and Park Authority specialty camps.

Also speaking at the meeting was Keith Leonard, principal with RRMM Lukmire Architects, which designed the community center. He said it will be constructed adjacent to the Sully Highlands Park, with access off Wall Road and about 180 parking spaces.

“There’ll be a generous, drop-off area for buses and cars, plus access to the park for shared parking,” said Leonard. “And there’ll be pedestrian connections from the development to the north.”

Discussing the building’s amenities, he said one side of the double gym would have bleachers and, “In theory, you could have four, different activities going on at the same time.”

“The main lobby will have seating areas and a reception desk,” continued Leonard. “The building is divided into active and quiet areas – for things like arts and crafts. The game room could have video games, table tennis, pool, etc. And the exercise room will have, for example, treadmills and free weights – but on a small scale, so as not to compete with the Cub Run Rec Center in Chantilly, 10 minutes away.”

He said the three, multipurpose rooms will each be 1,600 square feet. One will have a wood, sprung floor conducive to yoga and aerobics. It’ll have plenty of storage for equipment, but may also be used at night for meetings. Leonard said it’s an example of how important “efficiency and flexibility” are in this facility. He also noted that the building will be “mainly brick, plus some metal, with lots of glass in the lobby.”

Hours of operation will be Monday through Saturday, from 9 a.m.-10 p.m. Sundays will be for Park Authority rentals only. And there’ll be bike racks and WiFi.

Braff said the programs already in operation at the current senior center will be moved to the new one “pretty much intact” and at the same cost. “There’s a fee for the senior center, but there’s not a general-membership fee to join the community center,” he said. “However, classes might range, for example, from $5 for an 8-week, tai chi class to as high as $70/week for something else.”

He said the building’s entrance will be “zero incline,” so people may enter easily. And, added Braff, “We’ll have a meal program, not just for seniors, but for kids on free-and-reduced-price lunches. We have scholarships for those who want to participate, but need some financial help. And we’ll have buses go into neighborhoods to pick up kids and bring them to the center so they can be in a safe place after school.”

A woman asked if there could be an educational component, too, such as lectures by guest speakers. “A lot of our programming is driven by what the community wants,” answered Braff. “So we could partner with someone to do this.”

He said the county is also exploring the possibility of having a community garden there. And when a man asked about walking trails on the grounds, Leonard said, “It’s something we’re designing in the next phase.”

For more information, go to www.fairfaxcounty.gov/neighborhood-community-services/sully-community-center.