‘It Can Be an Economic Driver for the City’ in Fairfax 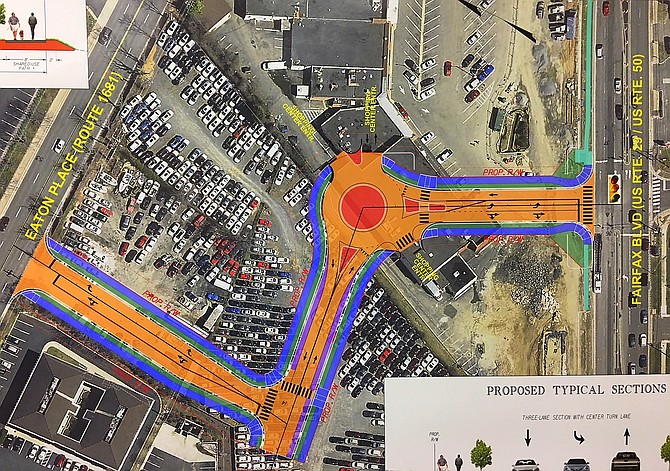 The proposed design of the Northfax East/University Drive Extension project.

A close-up view of the mini roundabout showing how large trucks would drive across the red, traversable islands.

The purpose of the Northfax East/University Drive Extension project is to reduce traffic congestion in the City’s Northfax area. It will be accomplished by creating a new, north-south connection between Fairfax Boulevard and Eaton Place.

The new road is planned to be 850 feet long. Its components include a mini roundabout, turn lanes, bicycle and pedestrian accommodations, some on-street parking, drainage improvements, traffic-signal modifications and landscaping.

It’ll be just north of University Drive and is completely federally funded via VDOT SmartScale funds. Estimated cost is $9.9 million, with the bulk of that amount earmarked for right-of-way acquisition from five impacted, properties, plus utility work.

The Fairfax City Council recently held a public hearing at the project’s 60-percent-design stage. It provided an update for the residents on the latest details and also let them express their opinions and concerns.

“Northfax is bounded by Chain Bridge Road, Eaton Place and Fairfax Boulevard,” said Nick Soucie of the Timmons Group, the City’s consultant on this project. “But currently, there’s no connectivity, so this would divide that existing ‘mega-block.’”

It would also reduce traffic volumes at the Fairfax Boulevard-Chain Bridge Road intersection and provide an alternate route from University Drive, south of Fairfax Boulevard, to Eaton Place and beyond. And it would give that site the needed infrastructure for future Northfax redevelopment.

Soucie said a typical section of road would vary from three lanes with a center turn lane to two lanes with on-street parking. And since the project’s 30-percent design phase, a mini roundabout was added to promote lower speeds and reduce conflict points so motorists, pedestrians and bicyclists could travel more safely through this corridor.

FAIRFAX WANTS to promote green, active streets, so a shared-use path and landscaping are also parts of this plan. The 8-foot-wide path, similar to a sidewalk, is intended for use by both bike-riders and pedestrians. It would go on both sides of the corridor, with marked road crossings, and connect Fairfax Boulevard to Eaton Place.

Landscaping would be in a 5-foot-wide planting strip and would be a combination of street trees, grasses and low-growth shrubs. Today, there are no trees or vegetation on that site.

The project schedule anticipates right-of-way acquisition and utility relocation this summer. Advertisement for construction bids would be in spring 2021, with the work beginning that fall.

At the public hearing, Transportation Director Wendy Block Sanford said there’ll be “narrower lanes on University and the incorporation of on-street parking, where possible.” She also noted that Eaton would become a T-intersection.

Councilman Sang Yi asked how this roadway plan fits in with the development of that shopping center, and Sanford said they’ve already showed it to the shopping-center owner, and he’ll work around it. “We’re expecting approximately 20 on-street parking spaces,” she added. “And there’s full access to Fairfax Boulevard in both directions from the shopping center.”

Councilwoman Janice Miller said the City should commit to doing four things: Develop a visioning plan for the Northfax area, meet with the landowners there to strategize about future development, completely adopt the [new] Comprehensive Plan and develop a stronger communication plan.

“Is there only one crosswalk on the east side of the intersection with Fairfax Boulevard?” asked Councilman Michael DeMarco. A City engineer said yes, and Mayor David Meyer explained that, at this point, a crosswalk on the west side isn’t included in the design.

Next, the residents had their turn to speak. First was Douglas Stewart, representing Fairfax City Citizens for Smarter Growth. “This street is essential for making Northfax a more vibrant, walkable and bikeable place,” he said. “These street-grid networks make you feel you’re in a particular place. We want pedestrians to want to go there, so we want traffic speeds no higher than 25 mph. And we’d like a crosswalk on the west side of University. But we definitely support this project.”

Doug Church, chairman of the Central Fairfax Chamber of Commerce, said, “Our offices are on University Drive and we’re in favor of this.”

Also speaking in support was John Figgle, who lives on University at the top of the hill. “This is a way for me to get to I-66 easier and with a couple options,” he said. “Could the mini roundabout have shrubbery or a tree without impeding cars’ vision?”

Michael O’Brien, vice chairman of the City’s Economic Development Authority, said both he and the EDA are in favor of this project. “This divides the neighborhood into a pedestrian-friendly development. It can be transformed into the heart of the City’s new downtown and can be an economic driver for the City.”

UNIVERSITY DRIVE resident Bob Kemp was pleased with the traffic-mitigation measures planned to slow down drivers there. Yet others contended the project would make things worse.

Amy Anspach, also of University Drive, said it “will send more traffic down University, and the residents on my street aren’t happy about that. We’re not going to get a Mosaic District there. We’re going to get a weird, jagged road and weird intersections that will only worsen traffic.”

“It’s not a traffic improvement,” she continued. “And there’s no need for the on-street parking. People on University can’t get in and out of their driveways and will be bothered by the noise the additional traffic will bring.”

Agreeing, Talya Schultz said, “The residents don’t want this, as evidenced by 350 signatures on a petition. And it’ll add more congestion than it’ll help. I think we could do better.”

“Is there some way the residents could get some information from the property owners about what they have planned for the other two parts of this three-part development?” asked Diane Henn. “It seems like more space is going into building roads than retail, there.” Besides that, she added, “There’ll be increased traffic on University Drive and Fairfax Boulevard. And it’s already tough getting in and out of Eaton Drive.”

After hearing all the comments, Meyer asked City staff to review and analyze all of them and “report back to the Council.”