Cappies Review: A Thrillingly Theatrical Battle Between Civilization and Savagery in McLean
Votes

Cappies Review: A Thrillingly Theatrical Battle Between Civilization and Savagery in McLean

McLean High School's production of The Lord of the Flies. 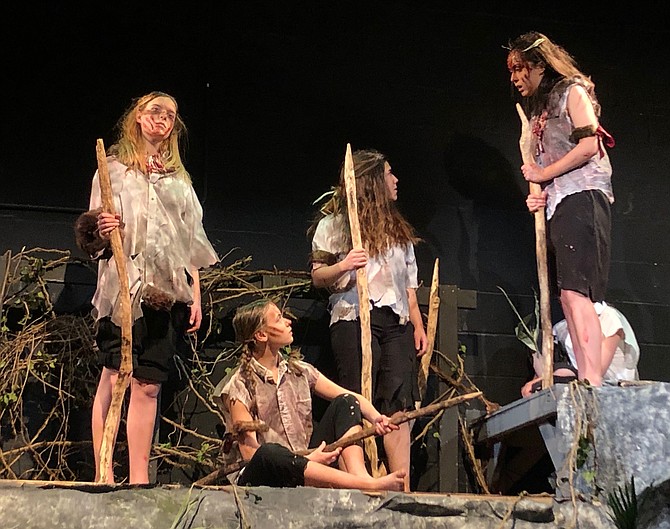 "Kill the pig! Spill its blood! Kill the Pig! Spill its blood!" chant a circle of girls, covered in mud and gashes, as they bang their spears against the ground. The audience looks around. A canopy of trees surrounds them, and as the audience takes their seats, they notice sand underfoot. Soon the show starts, and it all becomes clear. The audience is not just watching McLean High School's The Lord of the Flies, they are immersed in it.

The Lord of the Flies, a thrillingly theatrical battle between civilization and savagery, was first adapted for theatre by Nigel Williams, from William Golding's infamously disturbing piece of literature by the same name. Originally staged by The Royal Shakespeare Company in 1996, The Lord of the Flies proceeded to tour across the United Kingdom and ultimately progressed to be performed worldwide. It was first rendered for cinema in 1963, and was reproduced again in 1975 and 1990, with a new adaptation set for 2020. The story takes place on a deserted island, following a group of stranded British boys as they try to function as a society without adults.

The role of Jack Merridew, head choir boy and leader of the savages, is often said to be a physical representation of masculine rudeness and malice. Kristen Waagner does phenomenally in portraying Jack as both of these, never faltering in moments of pure cruelty, while still fully engaging in Jack's childish yet malignant responses to other characters. Her transition from head choir boy to head barbarian is clear in her expressions and movements, as each gets increasingly brash and inhumane as the show progresses. Waagner undoubtedly takes on the role of Jack with the same primal intensity Jack ultimately inspires in the other characters.

The savagery present in many of the boys would be nothing, if not rivaled against a civilized intellectual. Jordan Prather as Piggy easily fills these shoes with her off-British "ass-mar" accent, and overall emotional chaos, as she spends more and more time on the island. Her pinnacle moment is met with sheer determination, and the tableau of her at the edge of the mountain, with the conch heroically outstretched, will forever remain incised in the audience members' minds.

In addition to the remarkably jungle-esque set (Piper Phillips, Alicia Dziedzic, Rebecca Blackstein, and Maximilien Engel), the technicians managed to further convince the audience of the authenticity of the island. As the show progressed, the British schoolboy style outfits, made from scratch by Shea Killoran, Marguerite Godwin, and Katherine Kelly, deteriorated further and further. By the final act, the shirts were ripped, muddy, and bloody, the pant legs cut and torn, and the ties dirtied and fixed around the girls' arms, showing a clear progression of time. This would have all been for naught, however, if it weren't for the diligent work of the makeup crew, (McLean Hair Crew, Cassi Creason, and Gabbi Norton), who ensured each character had more and more bits of earth and blood appearing on their skin throughout the production. These gashes and carefully crafted bruises verified not only the progression of time, but the progression of the girls' emotion and attitude.

Ultimately, the raw intensity of McLean High School's The Lord of the Flies, along with the impressively bona fide technical elements, left the audience on the edges of their seats, as they watched the savage tale unfold before them.