Families and friends take the first step to a world without Alzheimer's. 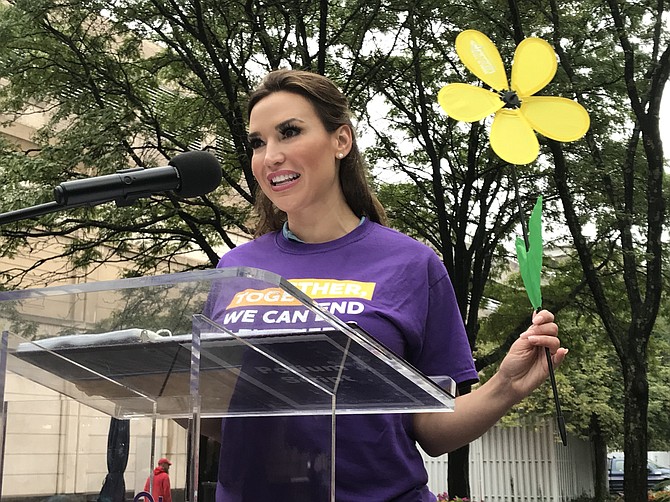 During her remarks to the crowd, emcee of the 2018 Walk to End Alzheimer's Disease – Northern Virginia Erin Hawksworth, Morning Anchor/Reporter and Sports Anchor/Reporter WJLA-TV (ABC7), says, "This cause is personal for me." Photo by Mercia Hobson. 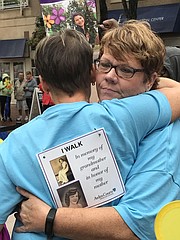 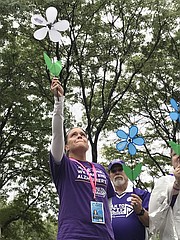 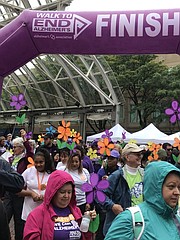 "Let's get this energy going," called Emcee Erin Hawksworth of WJLA-TV (ABC7) to the crowd before the ceremonial start of the Alzheimer’s Association National Capital Area Chapter Walk to End Alzheimer’s – Northern Virginia.

On Sunday, Sept. 23, a reported 843 participants and 184 teams assembled under the Reston Town Center Pavilion for a walk like no other. They were there to help raise funds to further the care, support and research efforts of the Alzheimer's Association. Hawksworth told how in Virginia, 140,000 people are living with Alzheimer’s. In the United States, more than 5 million people are living with the disease, and 16 million individuals serve as their unpaid caregivers.

Hawksworth spoke from her heart as she told that everyone there under the Reston Town Center Pavilion had a reason for coming. "This cause is personal for me,” Hawksworth said. She recalled how her grandmother had Alzheimer’s and told her uncle is currently battling the disease. "I truly believe that together we can end Alzheimer’s. And I can tell by looking out into this sea of purple that I’m not in this alone," said Hawksworth.

Ilissa Belanger, the 2018 Northern Virginia Event Chair, came to the microphone. “I have been touched by Alzheimer’s. I am very passionate about this cause. Both my mother and mother-in-law had Alzheimer’s," said Belanger. She thanked and congratulated top fundraisers. Meredith Hannan raised $5,400. Sharing the honors as the top fundraiser this year: Sherry Gryder and Anita Irvin, who each raised $26,781. Belanger pointed out the pair was the number 18 and 19 top fundraising individuals in the nation.

Hawksworth paused. "I am confident," she said, "that one day we will add a flower to this garden. A white flower that represents the first survivor of Alzheimer’s. … Until that beautiful day happens, we must not back down. We must continue to lead the way. Because together we can end Alzheimer’s."

In a Monday afternoon phone interview, Irvin reported both she and Gryder had increased their combined donations to $63,000, now number 11 in the nation.