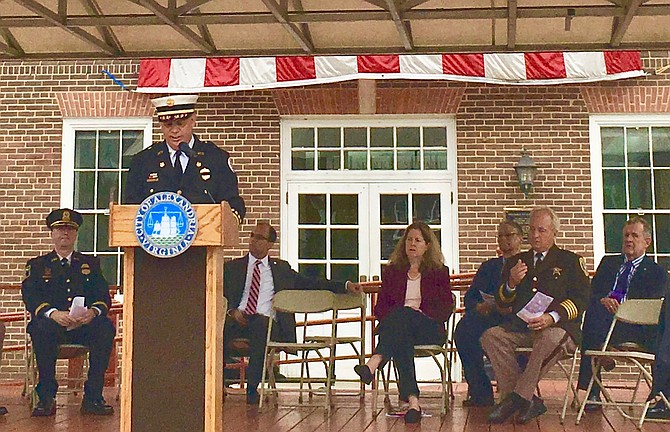 Alexandria Fire Chief Robert Dubé, who responded at the Pentagon on 9/11, speaks at the Tuesday commemoration ceremony. Photo by Dan Brendel/Gazette Packet

City officials and public safety personnel commemorated lives lost and sacrifices made on 9/11, but emphasized and encouraged the coming-together that the tragedy elicited.

“Evil struck fast and hard [on Sept. 11, 2001], and none of us were ready for what that looked like. … But what I’m going to remember today is how fast the good struck back,” said Captain Don Hayes of the Alexandria Police Department at a ceremony on Tuesday, Sept. 11. “The heroes on Flight 93 started to turn the tide before we all realized what was happening, and gave their own lives to save hundreds if not thousands. And then there are stories that that we have heard less about, like the town of Gander, Newfoundland in Canada, population 10,000. They opened their town and homes to 6,660 people, who were stranded on 38 jumbo jets that were forced to land at their airport because all air traffic to the United States was closed. … That’s about the equivalent of 85,000 people showing up in Alexandria. … Or maybe we should just stop and consider the countless number of simple, small acts of kindness that occurred in the days and hours that followed — like a Del Ray resident, who came out of her home and gave an exhausted, sunburned, and a little bit younger version of this Alexandria police officer, who was standing a post, a bottle of water and a simple thank you.”

“[We must] remember the heroic acts of the medics and firefighters of our fire department,” who assisted “in treating the injured, fighting the fire, and taking care of the building collapse at the Pentagon,” said Alexandria Fire Chief Robert Dubé. “The battle we face now is the unrelenting diseases that are being discovered in many of us, who worked in and around Ground Zero and the Pentagon. … Here in Alexandria, we have not been immune to it. In the fire department alone, we have four of our own, who operated at the Pentagon, who have been diagnosed with cancer. We must support them and … their families in this time of need.”

“We are grateful for [first responders’] fierce bravery during our most trying time as a community and as a nation,” said Mayor Allison Silberberg. “Today we not only honor the sacrifices on 9/11, but we resolve to stand up against hate in all forms. This is the lesson we must pass on. We must continue to step up for one another; to reach out to each other; to be accepting and embracing; to be kind and compassionate; and to build bridges of understanding. The grief of 9/11 must translate into a remembrance of our shared humanity.”