Opening in late September, the shop will feature a Vienna mural. 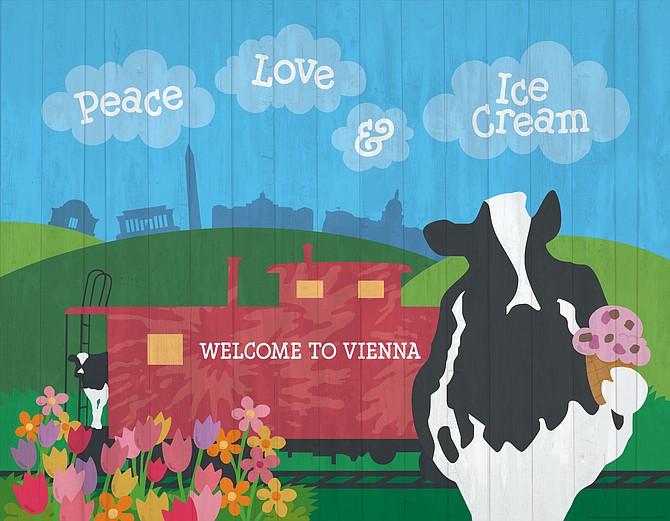 A new mural has a train and the familiar skyline that will resonate with local ice cream fans. Photo by Mike Salmon.

The pastel blue and puffy clouds of the new Ben & Jerry’s will brighten the Vienna Shopping Center.

By the end of September, Vienna ice cream fans will have another option when the new Ben & Jerry’s Ice Cream opens in the Vienna Shopping Center on Maple Avenue. With the store comes their community-friendly attitude, Cherry Garcia flavored ice cream and a specially designed mural that screams Vienna.

Up in Vermont at Ben & Jerry’s headquarters, a design team helped with the mural.

“We aligned on a design, it has things with Vienna that kind of resonate,” said the new owner Kyle Hosch, a local that franchises a Ben & Jerry’s in Dulles Town Center with his wife Christine.

The Hosches were looking for a location that would work well with the Ben & Jerry’s atmosphere and the town is known for a sense of community, similar to Ben & Jerry’s corporate message. The spot at the Vienna Shopping Center was open after Roebeck’s left, and “we jumped on it,” said Hosch. The pastel paint job, puffy clouds, and trademark cows are going on the walls, alongside the mural, and the ice cream scoops will flow in a matter of weeks. According to Colette Hittinger, the Ben & Jerry’s global operations manager, they send a corporate representative in for a few days of training and the grand opening event.

The mural concept has gone far, and Hittinger pointed out one of their more famous ones in New York City’s Times Square shop. “It’s really cool looking,” she said.

Before opening the first location at Dulles, Hosch went to their formal training school called “Scoop University,” in June 2017 to learn the Ben & Jerry’s way. Not only was he immersed in the culture during the 10-day course, it was “a good chance to meet everyone in corporate,” Hosch said. Hittinger noted the purpose of Scoop University. “We teach everything about peace, love and ice cream,” she said.

The tie dyes, flowery atmosphere and Cherry Garcia have hints of the Grateful Dead, a psychedelic rock band from the 1960s, and there is a connection, said Hittinger. A certain amount of their profits go to the foundation with Jerry Garcia’s family that supports “humanitarian, environmental and artistic causes,” their information states. More recently they’ve been linked to the band Phish, who fit the Grateful Dead mold. The ice cream flavor called “Phish Food,” is named after them. The Hosch family was once tie dyed free, but not anymore. Even the children have the tee shirts. “They each have several shirts, it’s a fun thing for them also,” Hosch said. “Cherry Garcia is my favorite flavor,” Hosch added, though he hasn’t really listened to the Grateful Dead before.

According to ice cream legend, the company started “from a renovated gas station in Burlington, Vermont,” their literature reads. “The journey that began in 1978 with two guys and the ice cream business they built is as legendary as the ice cream is euphoric.” Now Vienna is their latest stop. “What a long, strange trip it’s been,” says the Dead in their hit song “Truckin’.”