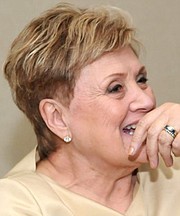 She was born and raised in Youngstown, Ohio, the daughter of Rose Rosapepe and P. Arthur "Pat" D'Orazio, an architect. She graduated from Ursuline High School there in 1958 and from Penn Hall Junior College in Chambersburg, Pa. before earning a B.A. in sociology from Arizona State University in Tucson in 1965.

Joan D’Orazio joined the same sorority her mother belonged to, Alpha Omicron Pi. They were active alumni together in Youngstown.

After graduation, she worked at the D’Orazio Architectural office in Youngstown until moving to the Washington area in 1970, where she worked as a professional secretary for Previews International, a prominent real estate firm.

She was living in Crystal City, Arlington, in the mid-1970s when she met her future husband, George Potts, a government relations consultant, at the apartment complex pool. In September 1977 they were married in their home in Old Town. Mr. Potts, director of public affairs for the American Land Development Association in Washington, died of cancer in May 1982.

Mrs. Potts was passionately devoted raising her daughter Hilary. She worked at local boutiques, including The Beehive on North Lee Street, so her schedule could accommodate her daughter’s school, sports and other activities. She also worked in the cafeteria and after-school program at St. Mary Catholic School, where her daughter was a pupil.

“Everyone who met her liked her and knew her name,” Hilary Potts Parry said. “She always outdid herself and went above and beyond for everyone. Countless friends are telling me that some of their favorite childhood memories happened at our house with me and my mom. ‘She was always so kind to me and made us all laugh’ is a common comment I’m getting. And she had an amazing holiday earring collection that is talked about to this day. She was known for her great style, and love for bright colors, madras and espadrilles.”

In addition to her daughter Hilary Parry and her son-in-law Joe Parry of Springfield, she is survived by two grandsons, Eddie and George Parry; her twin brothers Jon D'Orazio of New York City and Joel D'Orazio (Alice Kresse) of Bethesda, Md., and her sister Jan D. Mennell (John) of Granville, Ohio.