‘A Knotty Problem’ in Alexandria
Votes

‘A Knotty Problem’ in Alexandria 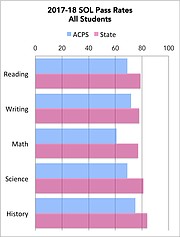 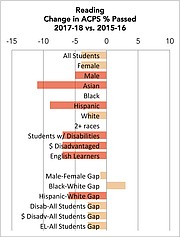 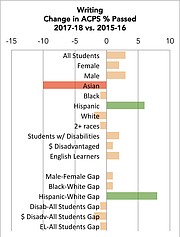 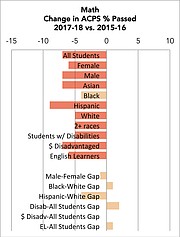 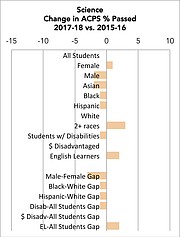 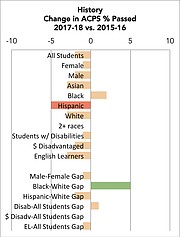 While students did better in certain areas, they generally lag in statewide performance, and also suffer various enduring achievement gaps between demographic subgroups.

Public schools annually assess proficiencies in reading, writing, math, science, and history/social science. Tests measure against Standards of Learning (SOL), which are “minimum expectations for what students should know,” according to the Virginia Department of Education. “The assessments also provide an objective means for measuring achievement gaps between student subgroups and for determining the progress … toward closing these gaps.”

Compared to the 2015-16 school year, ACPS students improved most in writing. In particular, the pass rate for Hispanic students increased by six percentage points. Performance remained fairly flat in science and history. By several measures, performance dropped off in math and reading.

Over the same timeframe, ACPS consistently lagged the state in every subject, both in aggregate and in most subgroups. This is particularly true in reading and math, where differentials widened across the board. Although ACPS caught up with the state a bit in writing and science.

The starkest differential by far is in comparing Hispanic-white achievement gaps. ACPS’s exceeds the state’s by double digits in every subject. For example, in math, ACPS shows a 38-point gap whereas the state shows a 16-point gap — a 22-point difference.

“There’s still work to be done, and I think we all know that,” said Dr. Gregory Hutchings, ACPS’s new superintendent. However, “The SOL data is just one data point of several, and I think it’s important for us to look at all of the different metrics to determine our progress.”

For example, while SOL testing gives only a snapshot, it “doesn’t gauge the [students’] progress over the year,” he said. ACPS expects that, next month, accreditation data will indicate such progress.

Also, testing doesn’t account for ACPS’s “outstanding programs in music, art and drama,” or when students “are the first in their families to attend college,” said School Board Member Margaret Lorber.

In any case, Hutchings says he’s refining and ramping up “school improvement planning.” For example, rather than annually, principals and department heads will now meet quarterly to evaluate goals and progress.

“What we’re focusing on is building capacity with our instructional leaders so that, regardless of what student walks in the door and what needs they have, we’re equipped to … meet and serve them,” he said.

Achievement gaps are not unique to ACPS. They’re a “knotty problem” nationwide, which educators have been working to address for decades, said former ACPS Superintendent Herb Berg.

“It is rooted in, essentially, the whole issue of poverty,” which negatively impacts learning and language acquisition at an early age, causing children to “start behind the curve,” he said. “The focus needs to be on those three-year-olds and up. … You’ve got to do everything you can in those early, early years.”

Alexandria “has the challenging dichotomy of being a high-income (per capita) city but one whose public school demographics include more than 60 percent of our students being FRL [free and reduced price lunch, a federal program and common proxy measure of poverty]. So many of the ‘academic gaps’ … can really be traced back to the ‘preparation and support gaps’ amongst our families,” said School Board member Bill Campbell. “We need to ensure that every FRL student in the city is provided quality Pre-K experiences. This needs to be a non-negotiable. … Our families need additional resources, distributed in an equitable manner in order to begin to see more equal outcomes.”

Hutchings also acknowledged a need to focus on “foundational skills” between pre-K and third grade.

“We can’t say, OK, we have these challenges in math at high school, let’s just change the high school math teachers. We have to change our whole mathematics program so that the continuum of that program, from kindergarten all the way through, is being revamped and being connected, so that kids are prepared to go to high school. … It is a systemic effort,” he said.

Nevertheless, “I believe all kids can learn, regardless of their circumstances and their backgrounds and their family situation. … We can put things in place to catch them up,” he said. “If I were a statistic, I wouldn’t be the superintendent. … The simple fact that I am says, it is possible. You can overcome life obstacles and … change the trajectory of whatever your upbringing was.”

“I look forward to hearing Dr. Hutchings and our administrators discuss the strategies” for improvement, said School Board member Chris Lewis.

The Education Association of Alexandria, which represents ACPS employees, didn’t respond to a request for comment.