‘A Constant Achiever, Going the Extra Mile’ in Sully District 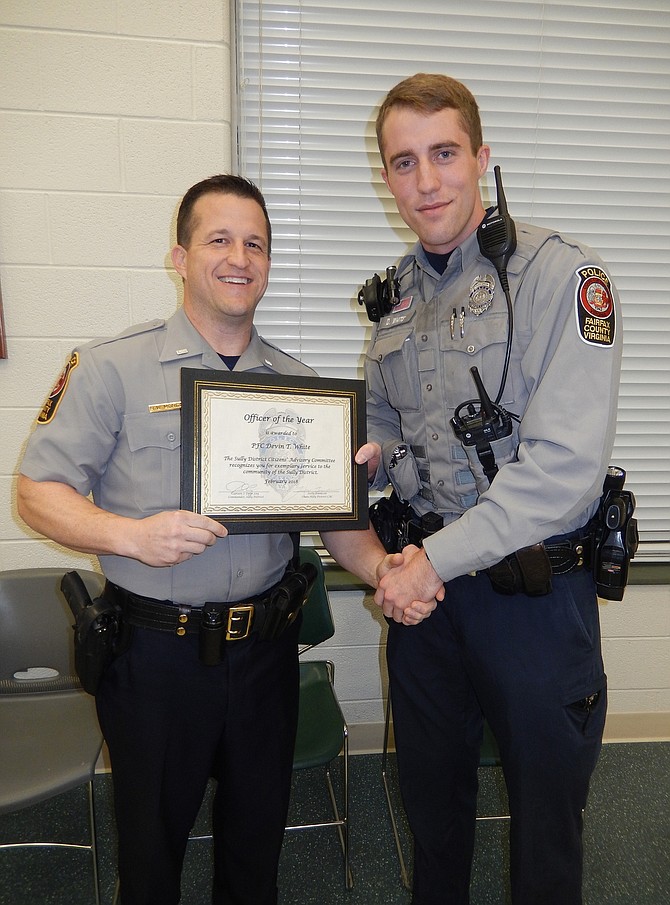 It takes someone special to be selected as a police station’s Officer of the Year. And as far as Capt. Dean Lay and 1st Lt. Ryan Morgan — the Sully District Station’s commander and assistant commander, respectively — are concerned, PFC Devin T. White is that person.

They both nominated White for this honor for 2017 and officially recognized him during the March 14 meeting of the station’s Citizens Advisory Committee. To explain why he was chosen, Morgan read their nomination letter out loud.

“The schedule and duties of patrol on the midnight shift are challenging and unpredictable,” he said. “Often, some in our community take advantage of perceived opportunities under the cover of darkness, while the majority sleep.”

So, said Morgan, “Midnight officers are tasked with ensuring the communities of Fairfax County remain safe, and [they] do so by proactively patrolling the roadways, neighborhoods and business districts. Police Officer First Class Devin White has demonstrated outstanding performance and dedication throughout 2017, exemplifying the mission of the Fairfax County Police Department.”

He said White understands the dangers of impaired driving and makes every effort to keep the roads safe for the motoring public. And to increase his knowledge and understanding in this field, White applied for and was selected to participate in the Alcohol Roadside Impaired Driving Enforcement course.

Hosted by the National Enforcement Training Center, in conjunction with the Department of Motor Vehicles, this course was created to address the gap in training between Standardized Field Sobriety Training and Drug Evaluation and Classification. It’s routinely reserved for officers who are specialists in DWI enforcement units. But, said Morgan, “Due to White’s strong, demonstrated commitment in this field, he was selected and returned with valuable information which was provided and proffered to other interested officers at the Sully Station.”

Furthermore, White was recognized in December 2017 by the Washington Regional Alcohol Program (WRAP). Founded in 1982, its goal is to keep the Metropolitan Washington area’s alcohol-related traffic deaths lower than the national average, through education and advocacy.

WRAP representatives honored White for his continued, exemplary enforcement efforts to identify and apprehend motorists suspected of driving while intoxicated. And besides this regional acknowledgement, he was nominated as Officer of the Month for the Sully District on three, separate occasions and was selected for the recognition in March.

This honor was initiated by his supervisors and reviewed by the station commanders; and, said Morgan, it was supported by White’s “continued DWI and criminal enforcement efforts. For calendar year 2017, his 50 DWI arrests led the Sully District Station and ranked fourth among the nearly 1,400 sworn Fairfax County police officers. White also led the Sully District with 168 criminal arrests.”

But White’s contributions don’t end with DWI and criminal enforcement. “He takes pride in managing calls-for-service in his patrol area and routinely volunteers for assignments with other squads,” said Morgan. “White finds balance in serving the community in times of need.” Morgan then presented two examples of how White has done just that.

Recognizing the injuries to be serious, White immediately called for rescue. “From what could be observed, the victim had at least four stab wounds,” said Morgan. “One of the most serious and un-stabilized ones was a wound to the victim’s arm. White obtained and applied a departmental tourniquet and performed other life-saving measures, while his squad mates took efforts to locate the perpetrator.”

The Fire and Rescue Department arrived shortly afterward to provide additional life-saving efforts before transporting the man to a hospital. “It was determined by medics and doctors that the actions taken by White that night directly correlated to the victim’s survival,” stressed Morgan. “The heroic actions of White have also been discussed for consideration through the Department’s Meritorious Awards Committee.”

Upon completion of the police investigation, the older brother was arrested. “White had no issue effecting an arrest, but realized the value of the machete for evidentiary purposes,” said Morgan. “With support from Sully Station detectives, he authored his first search warrant and coordinated with available resources to see its timely execution.”

“The initiative to learn and work through the challenges of the legal requirements of this complicated incident was rewarding. During the search, White discovered items that assisted in the closure of additional property crimes in the area.”

Overall, said Morgan, “White’s performance over the past year is an excellent example of the kind of effort and responsibility we all appreciate from our officers. He is a constant achiever, going the extra mile to keep the community members of Fairfax County and, specifically, the Sully District, safe.”

“White is dependable and has performed at a level that is rarely achieved by officers with similar time in grade,” continued Morgan. “It is our great pleasure to name Devin White as Sully Station’s Officer of the Year for 2017.”