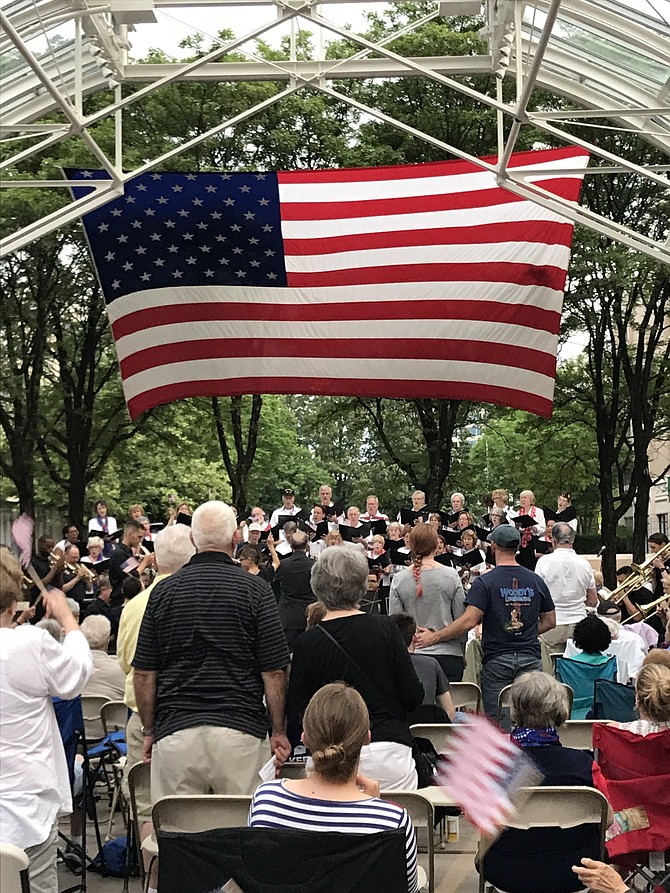 Members of the Armed Forces stand and wave their flags when they hear the song of their branch of the service during the "A Star-Spangled Salute" held at Reston Town Center over Memorial Day weekend 2018. Photo by Mercia Hobson. 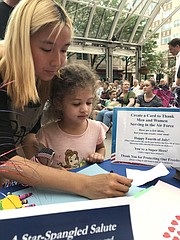 Riot Parker, 4, of Great Falls, is ready to make another thank you card for the troops with Abby Hargrov. The family-fun activity was part of "A Star-Spangled Salute" held at Reston Town Center over the Memorial Day weekend 2018. 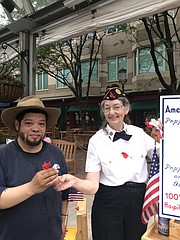 Mac McClure of Reston gets a poppy from a member of the American Legion Post #184 Herndon/Reston.

The Reston Chorale honored the men and women of the United States Armed Forces who serve and those who made the ultimate sacrifice during their Saturday, May 26, 2018, Reston Town Center performance of "A Star-Spangled Salute," led by David B. Lang, Artistic Director, Allan Laino, Associate Director and Tordis Fahringer, Keyboard Artist.

The 90-minute open-air concert held under the Reston Town Center Pavilion also featured Al and Ellen Torzilli of "Natural Selection" who performed early in the evening and "Brass of the Potomac," a British-style brass band led by Music Director Steve Bulla.

The event included family activities such as patriotic sticker tattoos, the creation of thank you cards and donations for care packages to be shipped to an Air Force unit serving in Southwestern Asia. During the three years the drive has been underway, it has provided a reported 1,000 pounds of donated items for Fourth of July celebrations to units serving overseas. In addition, members of the Herndon/Reston American Legion Post #184 were on hand at the Salute to distribute Memorial Day poppies and accept worn-out U.S. flags, which will be retired in a ceremony later this year.

Andy Sigle, emcee for the evening and a baritone in the Chorale, described the Salute as “A mixture of patriotic pieces and songs that capture the American spirit, from a great Sousa march to an homage to our hometown Reston."

THE PERFORMANCE opened with the Reston Chorale singing a stunningly powerful rendition of "The Star-Spangled Banner” followed by "I Hear America Singing," which Sigel told the composer Andre Thomas described as "transforming the jangling discord of our nation into a beautiful symphony of brotherhood." Next up and captivating the audience hearts was a choral rendition of "The Pledge of Allegiance."

"Brass of the Potomac" took to the stage next. Drawing much of its talent from the Army, Navy, Marine Corps and Air Force bands of the Washington, D.C. metropolitan area, the polished performance of Serenta with its Latin American rhythm appeared to be much enjoyed by the audience. "American Rhapsody" was brilliantly presented, the brass band giving off a golden light of notes with power and might.

“God Bless America” described as a peace song by Sigle, he was told, introduced on an Armistice Day broadcast in 1938 by Kate Smith. The Reston Chorale invited the audience to sing the repeated verse.

Finally, the moment of the “Armed Forces Salute” came where service members, military families and veterans there that night stood or waved their flag when they heard the song of their branch of service. So many people proudly stood and smiled.

One of the final songs of the concert was an exceptional performance by The Reston Chorale, "Restonnation," words and music composed by the Chorale's very own Jo Marshall. In describing the lyrics, Sigle said, "Marshall captured the best of Reston" in the piece.

THE CONCERT closed with "America the Beautiful" which meant to, as Sigel announced, "Remember all those who gave their lives for our country. Or, the lyrics so beautifully put it: who more than self their country loved, and mercy more than life."