Speaker at the Memorial Day Ceremony in Herndon also calls to honor government civilians and contractors killed in the line of duty. 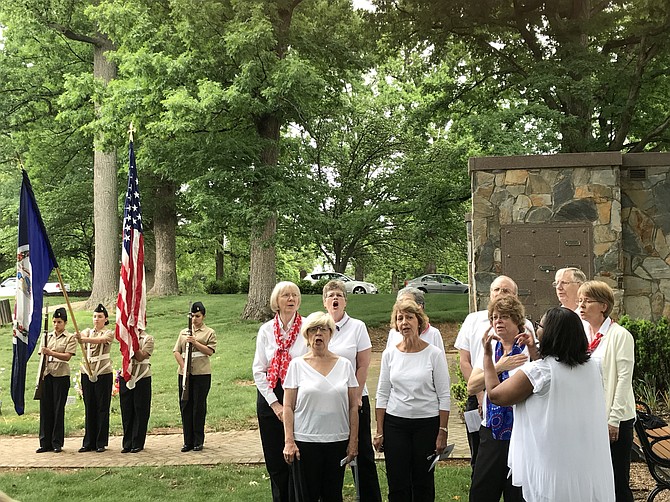 Members of the American Legion Wayne M. Kidwell Post, #184 of Herndon/Reston, salute as the national anthem is played during the Post #184 Memorial Day Observance Ceremony held at Chestnut Grove Cemetery in Herndon on May 28, 2018.

Memorial Day was originally known as Decoration Day. It was a time set aside to honor the nation's Civil War dead by decorating their graves. Post Commander David Womack of American Legion Post # 184 in Herndon, Virginia and Lisa Swan laid Memorial Wreaths on the graves of two Confederate soldiers "Known only to God" on Memorial Day, 2018.

With overcast skies but a promising cool breeze blowing through Chestnut Grove Cemetery in Herndon, on May 28, 2018, the American Legion Wayne M. Kidwell Post #184 of Herndon/Reston hosted the Town of Herndon Memorial Day Ceremony.

Citizens and active military service members gathered with veterans on the freshly manicured grounds of the local cemetery. They came to pause and remember the men and women in the military who gave their lives in defense of the United States of America and to aid other nations struggling to obtain freedom from oppression.

David R. Womack, Commander Herndon/Reston American Legion Wayne M. Kidwell Post #184 provided the Memorial Day Ceremony Introduction and Opening Remarks. Womack urged those present to take action. He said, "Take this moment of remembrance and translate that into action for the widows and children of the fallen...Fly the flag at your home. Support the organizations that support them...As you visit a local grocery store, pick up a poppy and give a donation... The future lies in remembering the acts of bravery, courage and sacrifice from the past. Keep remembering."

WOMACK then introduced the guest speaker for the day's ceremony,. Lisa Swan, the senior leader at the Joint Improvised-Threat Defeat Organization (JIDO) which focuses on combatting improved threats, such as IEDs, drones and other yet to be seen threats on the battlefield.

Swan began her remarks with a quote by President John Fitzgerald Kennedy. "A nation reveals itself not only by the men it produces but also by the men it honors, the men it remembers." She added a sentence President Ronald Reagan said more than thirty years ago, at a Memorial Day Ceremony in 1982. "And if words cannot repay the debt we owe these men, surely with our actions, we must strive to keep faith with them and with the vision that led them to battle and to final sacrifice.”

Swan related how over the 243 years of the United States history, the U.S. military has fought in twelve significant wars on four continents. She told how since 2001, 5,400 United States service members had been killed in action noting that number includes thirty-five killed within the past three years.

Swan told how those who serve out of uniform, such as individuals in the Civil Service, "... Take the same oath as those in the military to support and defend the Constitution against all enemies foreign and domestic." She stated, "We hold the same values: loyalty, duty, respect, selfless service, honor, integrity and personal courage." Swan reported that there had been twenty-one Department of Defense civilians killed in the line of duty since October 2001, and disclosed that number does not include those men and women who died in the attack at the Pentagon on 9/11.

"On this day, we remember them as well," Swan said.

SWAN explained her statements to honor all those who lost their lives in the role of military operations, "...whether deployed on a battlefield or in support of roles stateside or elsewhere. Our paychecks come through different channels, our rules of operation are a little different, but our mission is the same: to protect and honor the nation. We also honor our contractor employees who have died in the line of duty.

"To all of you here today, remembering friends, loved ones, and even those who died in battles before our time," Swan said, "thank you for joining me in honoring their service. Thanks to them, our future is bright."