Community gathers at Great Falls Freedom Memorial to pay tribute to those who fell in service of their country. 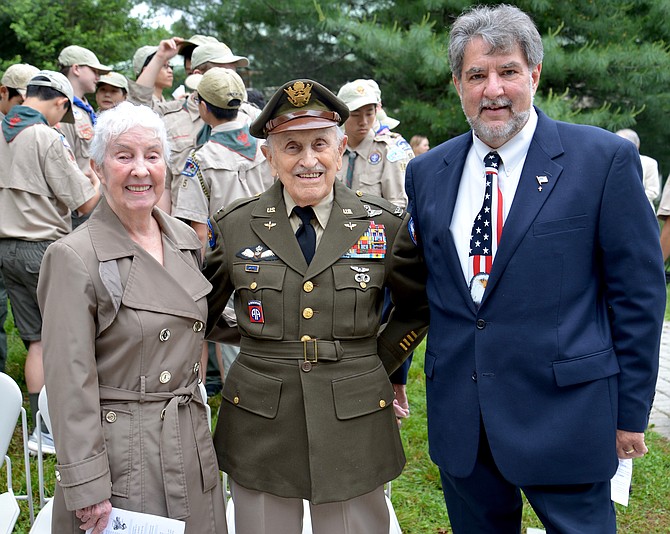 Col. Robert A. Shawn, Air Corps retired, served in World War II, the Korean War, and in Vietnam as a pilot. His wife Julia joined him in conversation with Calvin Follin of Great Falls, who was slated to read the names of passed Great Falls service members. Photo by Andrea Worker. 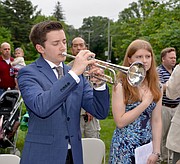 Members of Boy Scouts Troop 55 were an integral part of the memorial ceremony, saluting the flag and helping to lead the assembly in the Pledge of Allegiance, assisting in the laying of the wreath, and Raising the Colors – not to mention setting up and breaking down the seating.

Attending a candlelight vigil after the terrorist attacks of 9/11 set Retired U.S. Marine Corps Col. Peter “High Pockets” (so named for his lean and lanky 6-foot-6-inch frame) Hilgartner on the path to create a place in Great Falls where remembrances honoring those who fell in service of their country could be held with the respect they deserve. That place, situated behind the Great Falls Public Library, was dedicated in November 2004 and the Great Falls Freedom Memorial, the place and the people who continue to organize ceremonies to pay homage to those veterans was born.

Having passed away in January 2015 at the age of 87, Hilgartner’s was one of the names read on Memorial Day 2018 in the peaceful surroundings that he was instrumental in seeing created by rallying community physical and financial support.

A LARGE STONE, one of several donated by Great Falls resident Glen Sjoblom from his nearby property, forms the centerpiece of the memorial, with the chiselled inscription: “The Community of Great Falls, Virginia, Honors Those Who Have Given of Themselves in Service to the Cause of Liberty and Freedom.” In addition to the flagpoles set behind the stone, six trees, one for each Great Falls resident killed during the 9/11 attacks, stand guard around the memorial.

Another tree, a white oak set off to one side and seeming to be observing the events that take place within the memorial space, was planted in memory of Hilgartner and carries its own inscribed stone, expressing gratitude to the founder of the Great Falls Freedom Memorial.

Andy Wilson, president of the Great Falls Freedom Memorial, greeted the hundred or so who turned out to pay their respects on “the 150th anniversary of this day of remembrance,” on what was once called Decoration Day and was established originally to honor Northern Civil War veterans.

Wilson said that Memorial Day means different things to different people, from family cookouts to long-weekend trips to the beach, as the day is often regarded as the start of summer. “Whatever you choose to do on this day, let us remember that you are free to do so because of the ultimate sacrifice made by those we honor.”

Rev. Jerry Pokorsky of Saint Catherine of Sienna Catholic Church, gave the invocation, and then the crowd came to its feet for the Presentation of the Colors by the Color Guard Detachment, U.S. Marine Corps. With the flags held high by the servicemen, members of Boy Scout Troop 55 surrounded the inscribed stone and led the assembly in the Pledge of Allegiance, continuing to salute – along with many of those in attendance – during the singing of the National Anthem by Linda and Meagan Sill.

The keynote speaker, Rita Stead, was introduced by her grandson, Bruce Fein, a veteran of the war in Iraq and a resident of Great Falls for more than 35 years.

Labelled a “civilian veteran” of World War II and every conflict since, Stead was applauded for her “loving support to the armed services as daughter, sister, wife, aunt, great-aunt, sister-in-law, mother-in-law, and grandmother to numerous military members.”

While she certainly paid tribute to all generations of the nation’s military combatants, Stead engaged the crowd with personal recollections of life during World War II.

“What I remember most and best is the way the country worked as one to help our fellow man.”

The names of the 26 Great Falls heroes were read by Calvin Follin, and included two family members of his own. As each name was read aloud into the silence of the assembly, a bell was rung by Hilgartner’s widow Sara.

SCOUT TROOP 55 then performed the Raising of the Colors, and stood proudly at attention as “God Bless America” echoed around the memorial space as scouts, program participants, and the community in attendance sang as one.

This year’s memorial ended with a benediction by Pokorsky, and closing remarks by Andy Wilson, who urged attendees to “take just a moment for silence and remembrance” at 3 p.m., “wherever the were and whatever they were doing. A small thing to do to honor a very large sacrifice made on behalf of us all.”

The Great Falls Freedom Memorial will see organized action again soon, as the starting point for a 5k Race on July 4. A candlelight vigil will be held on Sept. 11, and a Veterans Day ceremony will take place on Nov. 11. Keep track of events at the website www.gffreedom.org.