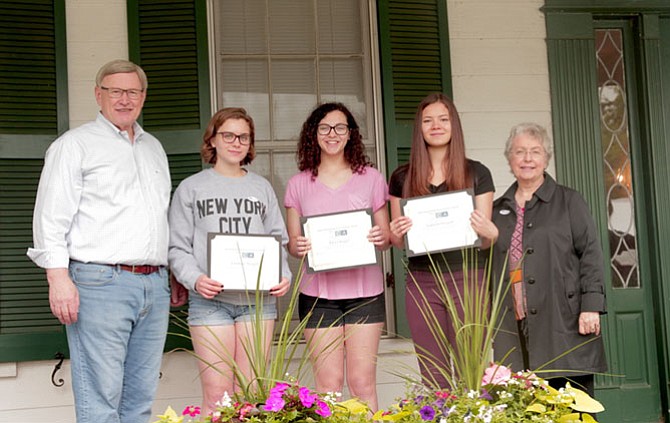 Amid a late-spring drizzle that left park grounds sodden and sneakers muddy, the McLean Citizens Association honored three teenagers on May 19 during McLean Day for their public acts of service.

Dale Stein, president of the MCA, gave the ceremony’s opening remarks, applauding the honored students for giving their “time, talent, and effort” back to the McLean community.

Eliza Seigel, a junior and leader at Langley High School, received her award for volunteering at the Lost Dog and Cat Rescue Foundation, as well as working with the MCA Youth Leadership to involve fellow students in high school policies that affect the community.

“I was just really interested in taking control of my own education, and being able to understand what goes on that influences the daily life of everybody around me,” said Seigel.

Lindsay Nyquist, a junior at Langley High School, received her award for providing students in low-income schools with the opportunity to learn science and math through a STEM (Science, Technology, Engineering and Mathematics) robotics program.

“They didn’t really have an opportunity to have a robotics program, because the robotics cost a lot of money, and I had kits at home, so I thought I would just bring it to the school,” said Nyquist.

Isabella Swigart, a junior at McLean High School, received her award for volunteering her leadership at SHINE for Girls, an after-school program for elementary students that blends dance with math education.

“[SHINE] was perfect for me because outside of school I also dance—that’s my main extra curricular,” said Swigart.

Strauss said during the ceremony, “Girls in her [Swigart’s] program averaged a 107 percent increase in math performance and a 25 percent in confidence assessment.”

Paige Pilewski, a junior at McLean High School, was unable to attend the ceremony, but was also nominated for the Outstanding Teen Character Award for coaching the 7-8 grade McLean Youth Volleyball team.

David Lee, chair of the MCA Education Committee, believes that the Outstanding Teen Character Awards are a long-term investment in McLean’s youth.

“Recognizing students today shows that not only do we appreciate them, but it’s also acknowledging that what they’re doing matters to our community,” said Lee.