‘It Restores Your Faith in Humanity’
Votes

‘It Restores Your Faith in Humanity’ 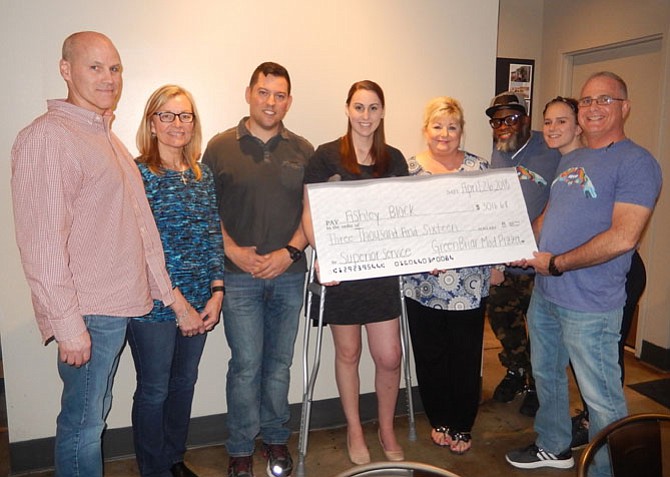 “I’m lucky to be alive. I came close to being paralyzed.” — Police Officer Ashley Block

One minute, McLean Police Officer Ashley Block was helping out during the March 2 windstorm; and the next, she was pinned to the ground by a tree that crashed down on her. She sustained severe injuries; and when a Sully District police officer mentioned her accident to the general manager of a Greenbriar pizza place, it spurred a fundraiser for her.

It was held March 20 at MOD Pizza, and police and firefighters from throughout Fairfax County, plus area residents, braved freezing temperatures, sleet and ice to get there. A month later, on April 26 – although still on crutches – Block was able to be at the restaurant, herself, to receive a check for the $3,000 raised in her name.

“I’m lucky to be alive,” she said. “I came close to being paralyzed. I just took my first steps today.”

When the windstorm struck, Block was a new patrol officer. Trees were down everywhere and, while one officer cut them up, she cleared away the debris. But the wind was so strong that the top of a tree broke off and fell on her, knocking her onto the ground and impaling her left leg. She broke her femur, shoulder, elbow, four ribs and some vertebrae.

“I’m scared of trees now,” she said. “When it happened, I heard a crack and started running – and all of a sudden, I was down and blacked out. The other officer called for help; then Dispatch called me, and I answered so they’d know I was alert and could respond. The next day, in the hospital, the ladies of Dispatch came to see me and brought me flowers. They said, ‘We’re so glad you responded; we didn’t know if you were conscious.’”

Block spent five days in the hospital and was then in a rehabilitation hospital for two-and-a-half weeks. Meanwhile, her mom, Janet Winner, packed up and moved here from Michigan to take care of her daughter while she convalesced.

She now undergoes physical therapy, five days a week, both at the Police Academy and with a private physical therapist. “I want to get back to where I need to be,” she said. “But it’ll be four to six months until I’m back at work on full duty.”

On April 26, Block and her family and boyfriend, PFC Sharif Issa, also of the McLean District Station, were treated to a pizza-and-salad dinner by Dean Ladson, general manager of MOD Pizza in the Greenbriar Town Center. Then Ladson and MOD District Manager Dirk Huber presented her with the check.

They wanted to raise money for her, explained Ladson, because “MOD believes in community giving, and we knew it was the right thing to do.” But his restaurant went above and beyond what most events of this type attempt.

Instead of donating just 10 or 20 percent of their proceeds during a few-hours’ time period, MOD gave Block 50 percent. It also made it an all-day fundraiser that applied to every customer that day. Topping it off, the wait staff donated 100 percent of their tips — which accounted for $700 of the total $3,000 raised.

“Police officers give everything for us, so we wanted to do something for her,” said Huber.

Before the check presentation, Ladson told Winner how happy they were to hold the fundraiser for her daughter, and she replied, “Thanks for taking care of my baby; I think it’s awesome.”

Block said she became a police officer because “I always had a passion to serve the community; I just had a calling for it. I hope to work federally someday, but I wanted to see what law enforcement was like on the streets, first. This accident is a hurdle, but it could have been a lot worse.”

As for the pizza fundraiser, she said, “It was amazing; I’m very grateful. Not many communities come together like that for an officer.”

But, said Ladson, “It’s always important that people know there are others outside [of their immediate circle] who care. It restores your faith in humanity.”