‘Gabby and Vicky Are Examples of Valor’
Votes

‘Gabby and Vicky Are Examples of Valor’ 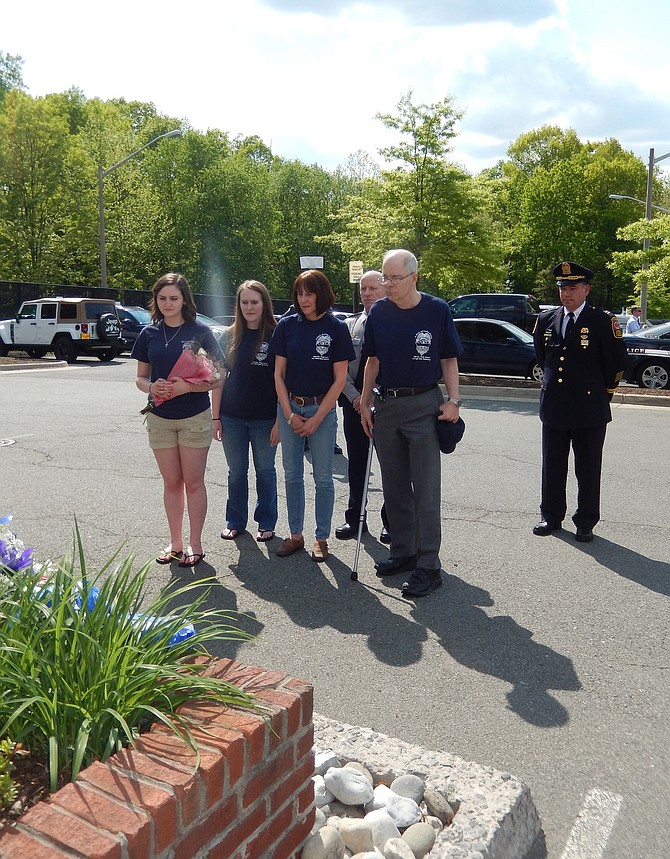 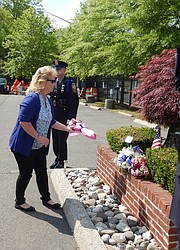 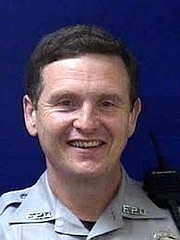 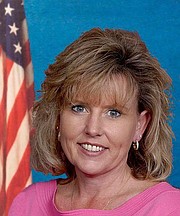 Some of the attendees at the remembrance ceremony for the two fallen officers.

Mention a date monumentally important to a certain generation, and people can tell you where they were when, for example, President Kennedy or Beatle John Lennon were shot and killed. For Fairfax County residents – and its Police Department, in particular – that date is May 8, 2006.

That’s because it’s when MPO Mike “Gabby” Garbarino and Det. Vicky Armel were fatally shot in the back parking lot of the Sully District Police Station. And for those who knew, loved or worked with them, that date is forever seared in their hearts.

Last Tuesday, May 8, they gathered at the station – as they have each year since the tragedy – to remember these two officers with a special ceremony. The station commander, Capt. Dean Lay, began it by saying, “We’re here to honor two heroes.”

On May 8, 2006, around 3:40 p.m., 18-year-old Michael Kennedy carjacked a van. Responding to the call, Armel went outside to the police station’s rear lot. But as she reached her cruiser, Kennedy – armed with five handguns, an assault weapon and a high-powered rifle – drove into that lot.

When the shooting began, Armel, a 17-year police veteran, made her presence known to Kennedy to draw fire away from Garbarino. She and Kennedy exchanged gunfire, and a bullet from his 30-06 rifle pierced her ballistic vest and entered her chest.

She made it back inside her cruiser, but was shot again in the legs. Yet even though mortally wounded, she still fired four more rounds, trying to stop the assailant. Armel was later pronounced dead at Inova Fairfax Hospital.

He also prayed to God and told his fellow officers, “I'm not going to die here.” True to his word, Garbarino held on in the hospital for nine more days, but succumbed to his injuries May 17, 2006. As for Kennedy, he was killed the day of the offense in a shootout with other responding officers; police said he’d fired more than 70 rounds.

Both Armel and Garbarino left spouses, two children each, grieving colleagues and a community in mourning. A year later, the Fairfax County Police Department posthumously awarded Gold Medals of Valor to both officers.

“Thank You for the opportunity of honoring the lives Vicky and Mike lived and their public service, and bless each public servant,” he prayed. “These were two of my friends. And in these times in which we live – in honor of the lives they gave – I challenge you to continue to do your best, despite the atmosphere where you often don’t feel appreciated.”

“The hope is that, when you’re out on the street, you’ll do things, not because of what you’ll get in return,” continued Perkins. “You’re giving in good measure, as God promises to give to us. Thank you for all you do for so many who won’t thank you. Be safe out there.”

Recalling May 8, 2006, Lay said, “I was with the National Capital Regional Intelligence Center, and I responded here that day. I saw men and women at their best, and I saw valor. Gabby and Vicky are those examples of valor, and every day I go through that [parking-lot] gate, I remember that.”

Next came a moment of silence in their memory, followed by a tone sounding and a police helicopter flyover. Then Lay said he’d be returning to their families the mementos people had given the Police Department in Garbarino’s and Armel’s honor, over the years.

Stepping next to the podium was the assistant station commander, Lt. Ryan Morgan. “This always touched me deep inside and, every year, it hurts,” he said. “They say time’s supposed to heal, but we won’t forget. We’ll always preserve the memory of Mike and Vicky. I consider all of you family, and I just wanted to say thank you. Mike and Vicky will never be forgotten by anyone here.”

Then Armel’s and Garbarino’s families laid flowers on their own and on each other’s memorials there. Afterward, Garbarino’s widow, Sue Garbarino Woods (who remarried last September) said, “It was tough,” but also stressed how much she appreciated the event.

“I was at the McLean District Station earlier today, and they had a service today, too, because Mike was there 20 years,” she said. “I talked to a police widow there who lost her husband in another jurisdiction. And she said, after the funeral, that was it from the Police Department. And it made me feel how rare and blessed we are to have such a wonderful department.”

“We’ve had 12 years of services here,” continued Woods. “And I often think of how our healing would have been so much different, had we not had the support of the department.” She was there with her two, now-grown daughters and said they were her “emotional compass” when their father was killed.”

“Mike always told me, ‘If anything should ever happen to me, make sure the girls are always happy and smiling, because I’m fine,’” said Woods. “And they remembered that, so I was able to move on. I’d cry a river if I could change it, but it wouldn’t help. He died when he was supposed to.” She also said talking about him and helping other survivors helped her feel better.

“During the year, I talk to the graduating cadets at the [county] Police Academy and give a 30-minute speech about our life before, what happened that day, how we survived and how the department helped,” she explained. “I also tell them that we’re survivors and we like to be approached and have people say, ‘We’re thinking of you.’ And this [memorial] ceremony is all about remembrance. It gets emotional, but it’s important.”

“It means everything to me,” added married daughter Katie Mannix. “Just the fact that, after all this time, they do things and remember my dad, is everything.”

Sister Natalie, who graduated three days earlier from Bridgewater College in the Shenandoah Valley, said, “I was so upset that I missed this event last year because I was busy with school. So it’s like coming back to my family. I love this ceremony and will never get tired of it. When my dad died, Katie was 14 and I was 10. He opened his eyes, the night before, so we thought he was going to make it; we had hope.”

Remembering that time, as well, was Susan Culin, who was the station’s captain when the tragedy occurred. “On May 8, you flash back,” she said. “This day has so much meaning for this entire department. It’s extremely important that this station remembers Mike and Vicky and the sacrifices they made.”

“It’s hard for everybody, but there are also a lot of good memories with both of them to focus on,” she continued. “They were both really good and dedicated officers, and good people. And that’s what we come together to remember – not just the tragic events of that day – and how much we miss them.”

Armel’s sister, Sandy Munday, called the annual memorial ceremony “heart-wrenching. It’s cool that they remember Vicky, but it’s also sad. It makes you remember where you were that day. I was in the grocery store when my husband called. He was a battalion chief with the Fairfax City Fire Department then, so they called him first and said, ‘We think your sister-in-law got hurt at Sully.’ Then I called her husband Tyler and we all met at the hospital. We didn’t find out she’d died until after we got there.”

Each year, Tyler Armel goes to the county’s rose-garden ceremony in honor of all its fallen police officers. His daughter Mason was just 5 when her mother was killed. But since Mason can drive now, she attended last week’s event for the first time.

Armel’s old squad, plus her partner Mike Motafches, took Mason to lunch before the ceremony and told her stories about her mom. The remembrance also made a big impression on her. “It reminded me that she was really heroic,” said Mason. “And it makes me proud that she’s my mom.”

All in all, added Munday, “We really appreciate all Fairfax County has done for us. They give us transportation to Police Week functions and send wreaths each Christmas to our homes and to our family members, too. And that makes me happy because my sister loved Christmas.”

Besides that, she said, the county’s Peer Support team calls several times a year “to check on us and see if we need anything. They’re wonderful; we couldn’t have survived it without them. The police really are a family.”