About Time or Déjà Vu at American Legion Bridge?
Votes

About Time or Déjà Vu at American Legion Bridge?

The Board of Supervisors pushes for Maryland to add capacity to the bridge. 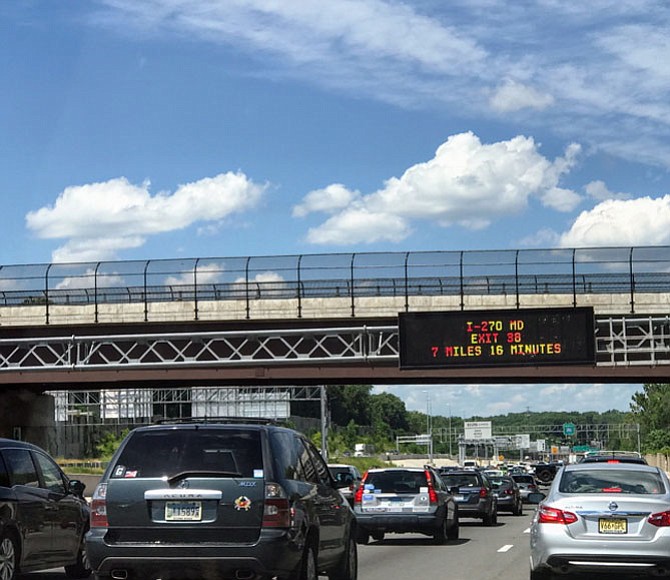 About 75 people came to a meeting in McLean last week with concerns about gridlock and cut-through traffic, some of it caused by traffic on the Beltway.

Commuters crossing the river at the American Legion Bridge, both morning and night, try to find any route that saves just a little time. But already clogged McLean intersections, roads and neighborhoods have become even more saturated by drivers, some armed with traffic applications like Waze, who think McLean is the cut through of choice to save a few minutes.

At a community meeting hosted by VDOT last Wednesday, May 9, 2018 at McLean High School, Dranesville Supervisor John Foust told McLean residents that “exciting” developments are on the way.

“There has been some, I think, really wonderful news coming from the Maryland side,” Foust said, in McLean High School cafeteria.

More than 75 people attended the meeting to hear short term, intermediate and long-term plans to break gridlock on McLean’s streets.

“They are really pressing forward,” Foust told the audience about the expansion of lanes on the American Legion Bridge to relieve congestion.

Maryland Gov. Larry Hogan (R) announced plans earlier this year to add four new lanes to I-270, the Capital Beltway, and the Baltimore-Washington Parkway by means of a public private partnership. Hogan touted the $9 billion traffic relief plan as a way to reduce congestion for millions of drivers and significantly improve the traffic conditions on some of Maryland’s most traveled roads.

“The [Maryland] Governor says he wants construction to begin in 2020,” said Foust. “I don’t think that realistic,” but “it’s not my place to say so.”

“Let me just say, ‘Yay!’” said Sharon Bulova at the Fairfax County Board of Supervisors meeting on May 1, 2018, when the Supervisors voted to send a letter pushing Maryland to study options to relieve congestion at the Bridge.

“You can see traffic backed up way beyond Tysons trying to get to Maryland in the evenings,” Foust said at the Supervisors meeting.

“Maryland just did a major major commitment to its own Beltway and I-270 and the American Legion Bridge and I thank them so much for that.

“I didn’t think we were ever going to get to this point. I really didn’t,” said Foust.

THE LETTER the Board sent to the Maryland Department of Transportation State Highway Administration is firm.

“The County believes that the capacity needs across the Potomac River must be addressed to alleviate the existing congestions and to ensure that the region remains economically vibrant,” wrote the Supervisors.

“Approximately 239,000 vehicles use the bridge on an average weekday, resulting in substantial congestion and delay for those residing and working in our localities. Use of the bridge is expected to increase over the next 25 years, further exacerbating the problem. Addressing the capacity of the bridge is essential to the quality of life and economic development for our region.”

Board members expressed enthusiasm as they reviewed the letter at the Board meeting on May 1, 2018.

“This moves us forward to working with Maryland on providing continuity for transportation on the Beltway,” said Bulova. “The cooperation and coordination with Maryland really is critical.”

“The fact that it’s taken such a push is quite amazing,” he said. The letter, he said, serves “as a way of sharing our positive experience [with the Express Lanes], to the extent that people in Maryland can’t look at the obvious and understand it, maybe we can help prod them that way a little bit.”

Providence Supervisor Linda Smyth and Springfield Supervisor Pat Herrity envisioned the future with transit and a second crossing over the Potomac River.

“We have certainly been pushing our colleagues in Maryland to come up with a proposal to work on this as part of our planning for the region,” said Smyth. “While we may just be talking about just adding roads and toll lanes now, it could be the basis for other sorts of transit for the future.

“There are lots of possibilities with this in the future. We just need to get something constructed,” she said.

According to Herrity: “It’s finally good that we’ve got a governor in Maryland that’s serious about improving congestion on both their side and our side.

“Hopefully we keep the pressure on them for a second crossing,” said Herrity, who described the congested path down I-270, to I-495, to the Dulles Toll Road that Marylanders take to work.

“The Maryland traffic in Virginia is stifling to our communities. It has gotten so bad, I think more than half of the people at Fort Belvoir have Maryland tags now and they have inundated our roadways to a point where schools can’t get busses out on Telegraph Road, Mount Vernon Highway is backed up for miles, the G.W. Parkway is a raceway,” said McKay. “We certainly want to be a region, but the impacts of the huge influx of Maryland folks coming into Virginia and the southeastern end of the county, most specifically Fort Belvoir, has had a tremendous effect on our infrastructure.”

NOT ALL were convinced, including Hunter Mill Supervisor Catherine Hudgins.

“I will tell you that my excitement is not quite at the level of others because I have been riding the Beltway since early 70s. It was crowded then, it is crowded now. And I’m subject to believe that it’s going to be crowded,” said Hudgins.

The environmental impact would be massive, since Potomac, Md., like Great Falls, has been zoned a low density area to protect the health of the Potomac River and the region’s drinking water. Montgomery County has created a 93,000-acre agricultural reserve in the outer part of the county which is not hospitable to a so-called techway.

In its letter, the Board of Supervisors said the Park Authority needs to determine “any anticipated impacts to the Scotts Run Nature Preserve.”

SOME McLEAN RESIDENTS at last week’s meeting say the Express Lanes built on the Virginia side have caused a choke point at Georgetown Pike, because the lanes end abruptly, and are not matched by increased traffic capacity on the American Legion Bridge or the Beltway in Maryland.

“Putting all the merge points at one point makes it a nightmare,” said April Georgelas, calling the situation an emergency.

In April, Virginia's Commonwealth Transportation Board approved $6 million in funding for the Virginia Department of Transportation to conduct an environmental study of a plan to extend the I-495 Express Lanes by approximately three miles from the Dulles Toll Road interchange to the vicinity of the American Legion Bridge and Maryland line.

A meeting is scheduled for June 11, 2018 at Cooper Middle School to specifically address the proposal and its impact on McLean and the region.

According to the letter: “With the daily delays leading to the American Legion Bridge, many commuters leaving Virginia have found alternative routes to travel as close to the bridge as possible before entering the Capital Beltway. Since some neighborhood roads near the bridge have been affected by traffic from these commuters, we request that the traffic study undertaken as part of this process include the impact on these roads in its scope.”