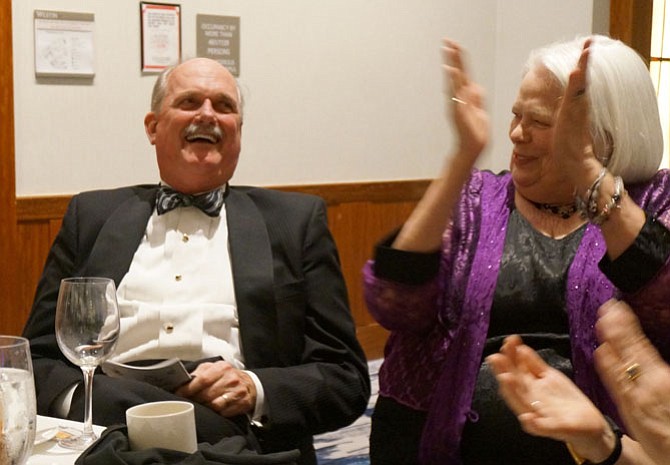 Julie Lineberry, right, applauds Adron Krekeler as the winning bidder on the chance to drive a Lamborghini Huracan at the April 14 SOLA ball. Photo by John Bordner/Gazette Packet 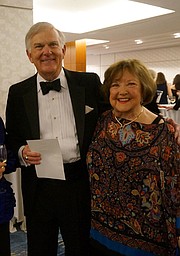 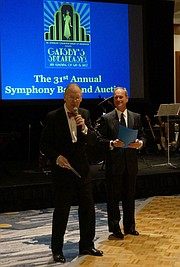 Auctioneers Gant Redmon, left, and Shawn McLaughlin prepare for the start of the live auction portion of the SOLA ball April 14 at the Westin Alexandria.

The Roaring ’20s came to life April 14 as the Symphony League of Alexandria held its 31st annual ball and auction at the Westin Alexandria Hotel.

With a theme of “Gatsby’s Speakeasy – an Evening of Gin and Jazz,” the ball attracted more than 150 patrons and raised funds for the Alexandria Symphony Orchestra.

The previous weekend the ASO wrapped up its regular season of programming with Nicholas Hersh as guest conductor. Hersh was the last of four finalists to perform with the ASO as part of the search for a new music director. Other finalists include Michael Rossi, James Ross and José-Luis Novo.

“We are in the process of making a decision,” said Rector of the year-long search to replace longtime Maestro Kim Allen Kluge. “We had some exciting guest conductors this year and expect to make an announcement soon on who will be the new music director for the ASO.”

To learn more about the four ASO finalists, visit www.alexsym.org.