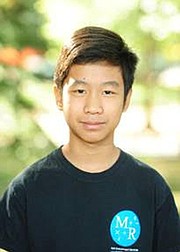 Wang was invited to take the USAJMO test for students in grade 10 or below, based on Wang’s scores on the American Mathematical Competitions 10 and American Invitational Mathematical Exam. This is a six problem, nine-hour contest given in two consecutive days. The math problems are proof-based and generally require multiple pages of justification. The USAJMO is then graded by accomplished mathematicians.

BASIS Independent McLean’s math instructors, Vern Williams and Dr. Ryan Grove, noticed Wang’s math caliber, which allowed him the opportunity to take post-advanced-placement math classes on an individual basis with his math instructor. Wang was also a top winner for the Virginia State MATHCOUNTS team in Washington, D.C. this past spring.

“This is a tremendous mathematical accomplishment for Sam, but his true strengths lie in his strong work ethic, respectfulness and eagerness to learn,” said Dr. Ryan Grove, subject expert teacher at BASIS Independent McLean. “It is my pleasure to teach Sam at our school, and I look forward to helping him develop his mathematical abilities even further,” said Dr. Grove.

“We’re are so proud of Sam’s math achievements, as it’s rare to see a seventh grader excel at this level of math,” said Vern Williams, math subject expert at BASIS Independent McLean. “Sam’s ability to master advanced math skills has been beyond exceptional,” said Williams.