‘Congestion Relief for Our Residents’ in Centreville
Votes

‘Congestion Relief for Our Residents’ in Centreville 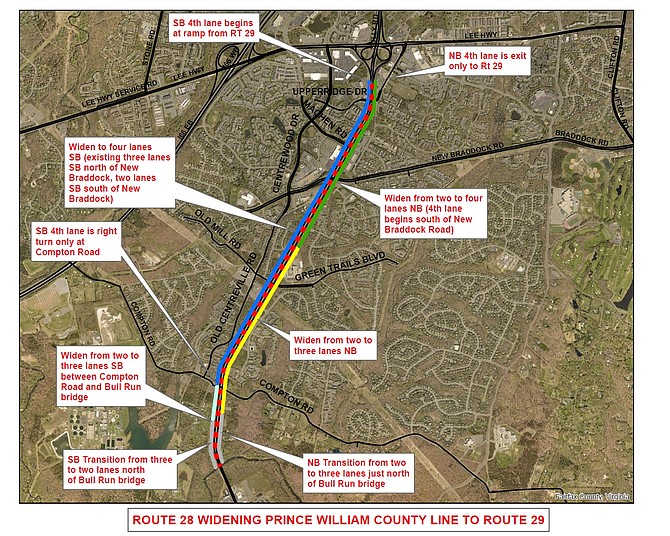 Anyone who’s driven on Route 28 in Centreville knows what a pain it can be during rush hour. But relief is on the way in the form of a multimillion-dollar widening project.

It’ll run for about 2.3 miles from the bridge over Bull Run to the interchange at Route 29 at the Prince William/Fairfax County line. It will add more through lanes to Route 28 and provide additional lanes on side streets to improve traffic flow.

It will also improve intersection operations, upgrade existing traffic signals and improve bicycle and pedestrian crossings. In addition, new, 10-foot-wide, shared-use paths will be created on both sides of Route 28. And local residents got to hear about the proposed plans during a recent, public-information meeting at Union Mill Elementary.

“This is an important project and ranks high in terms of congestion relief for our residents,” said Supervisor Pat Herrity (R-Springfield). And Supervisor Kathy Smith (D-Sully) said both this project and the widening of I-66 will help people’s day-to-day lives here.

Todd Minnix, chief of the Design Division of Fairfax County’s Department of Transportation (FCDOT), also addressed attendees, presenting details of what’s proposed. “The purpose of tonight’s meeting is to show you what we’ve developed so far, tell you where we think we’re going and get some feedback from you,” he said.

“In January 2014, the original scope was to widen Route 28 to six lanes from the Bull Run Bridge to the Route 28-/29 intersection,” said Minnix. “The county’s Comprehensive Plan envisioned eight lanes someday, with HOV lanes and a future interchange at New Braddock Road. But we don’t need eight lanes, the entire length of the project.”

So far, he said, FCDOT has done preliminary environmental studies and surveys and has delineated some streams and wetlands in the project area. It’s also begun to do noise and air-quality studies, plus traffic analyses.

FCDOT examined the possibilities of having either six, seven or eight lanes on Route 28. “It’s still being analyzed,’ said Minnix. “But we think a 6-7-8-lane hybrid will work best. We’re building this for 2040 levels of traffic.”

In addition, at the intersection of Ordway, Compton and Old Centreville roads, four design options are under consideration:

Improvements would also be made at all signalized intersections by adding turn lanes and/or one or more additional lanes on side streets. Doing so would eliminate split-phase, signal operations and improve overall intersection operations. Being considered are:

“We’re also proposing to close two medians on Route 28,” said Minnix. “We’d leave open the median cut at Bradenton Drive, but close the ones by E.C. Lawrence Park and at Darkwood Drive. And we’re proposing to leave a 32-foot-wide, grass median between intersections.”

Besides that, he added, “There’s federal money in this project, so we’re required to propose noise mitigation in neighborhoods where projected noise levels will exceed established criteria. But the residents need to say, in writing, that they want noise walls. And at least 50 percent have to vote affirmatively for them.”

Further adding to this project’s menu of choices, there are two construction options, as well. Design-Bid-Build is the standard process for implementing transportation projects. After the design is some 75-80-percent completed, right-of-way acquisition begins, followed by utility relocation and finalization of the design. Then the project is advertised for construction bids.

Design-Build provides for more-rapid progress by combining and overlapping the design, right-of-way, utility and construction phases. As a result, many of the tasks are done concurrently, rather than one after another.

When the project actually gets underway – which, assuming all the money comes through, could be 2020 – Minnix said night work is likely. “Signals and traffic must be maintained during construction,” he said. “And there’ll be no lane closures during rush hour.”

If all goes well, project completion is earmarked for 2023. “We’ll come back to you this fall,” he told the residents. “By that time, we should know where noise walls may go, how much right-of-way and easements we’ll need, how many lanes we’ll have and where they’ll go. Then we’ll hold another public hearing in spring 2020, and construction could start within 30-60 days of that hearing.”