Hundreds would have died without this level of care. 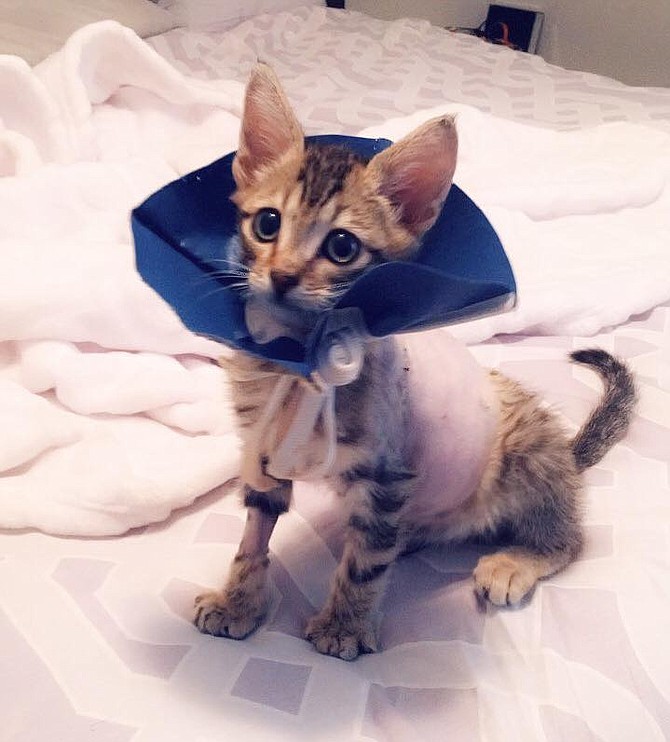 Timone’s Tale: From the Animal Welfare League of Arlington (AWLA): “We've had Timone since he was just a week or so old, and didn't notice any issues until he was starting to wean and move onto wet cat food instead of KMR. He could not keep anything down — every time he tried to eat, he would vomit everything back up. After a few weeks of trying to figure out what was wrong, he was diagnosed with a condition that had caused a ventricle from his heart to wrap around his esophagus, restricting his esophagus to the size of a pin. Now that we had a diagnosis, he needed immediate surgery to correct the condition so that he wouldn't starve to death. Unfortunately this was open heart surgery, and very expensive because of the intricacies of the surgery. We were able to raise the entire $8,000 for his surgery and after-care in 24 hours. Our community really banded together to save Timone's life. Timone had his surgery, but unfortunately his condition was more severe than we first thought, so it did not fully correct it. He's doing much better, and we hope with some further treatment and therapy, he'll be OK. We're still unsure as to how his condition will progress, but we're doing all we can for him.” Photo by Chelsea Lindsay

“There's really no reason for any animal in Arlington not to be properly cared for, because if the owner does not have the means to do so, we have all of these safety net programs to help people.” —Susan Sherman, Chief Operating Officer, AWLA

The Animal Welfare League of Arlington (AWLA) has always been a resource to current and aspiring pet owners, but it is now able to help more animals than ever thanks to its neonatal kitten nursery.

For years, AWLA has taken in stray kittens and placed them with foster owners, but it was fairly small-scale and just for the ones that were found in Arlington. Last year they received funding to open a kitten nursery, so after getting an incubator, they can now accept kittens from the broader metropolitan area and other places in Virginia.

“We have taken in about 400 kittens this year, and they're usually the ones that are the most likely to get sick and have problems,” Chief Operating Officer Susan Sherman said. “We're saving literally hundreds and hundreds of kittens that would either die or would have to be euthanized in other shelters.”

Kittens have to be bottle fed around the clock, so not many shelters have enough people or resources to take care of them, but AWLA has raised an army of volunteers by offering classes to teach people how to care for these kittens.

“I’ve been here a really long time (more than 20 years), so I've seen this place evolve so much,” Sherman said. “We’ve been doing trap-neuter-return for feral cats for about 7 years, so that has really reduced the population of kittens and strays in Arlington, so now we’re able to help other places.”

Beyond helping kittens, AWLA offers a plethora of resources for pet owners. They have everything from a rabies and microchipping clinic, to a behavior helpline to a pet loss support group. They also provide emergency services such as veterinary assistance, created for people who have a pet that has a sudden medical problem that they're not able to pay for, and safekeeping, which allows people who are experiencing a health or housing crisis (unexpected hospitalization or house fire) to keep their pets at the shelter for free until they are able to bring them home.

They also have some resources that are only available to people who have a household income of less than $60,000. These include low-cost spay/neuter assistance and a low-cost wellness clinic once a month, which provides a rabies shot, as well as other vaccinations, a heartworm test, and an examination by a veterinarian.

“There's really no reason for any animal in Arlington not to be properly cared for because if the owner does not have the means to do so, we have all of these safety net programs to help people,” Sherman said. “As much as possible, if somebody is struggling with taking care of their animal we want to provide these resources to help them keep their animal. They can always surrender the animal, but first we try to let them know all these different ways that we can help them, so that they can keep their pet.”

To maintain these resources, AWLA staff members spend much time on fundraising. They receive a third of their budget from the county, so without donations, it would be much more difficult to pay for things like spaying and neutering the dogs, special surgeries, or even the employees’ salaries. Communications Specialist Chelsea Lindsey estimated that it takes almost $2 million a year to run the shelter, and $1.3 million of that has to come from donations each year.

To raise money, AWLA has created creative campaigns to help them out. Right now, they are having their calendar contest, where people enter pictures of their pet and then get other people to vote for their pet by giving money. They also have major fundraising events like the Walk for the Animals every spring and their fall fundraiser, which has been a beer festival for the past few years. Despite these large events, most donations come from people who read about a specific animal on social media who is in need of surgery or an expensive treatment.

“I hate to say it, but these stories about adorable animals in need are what get people wanting to donate. We know when we get animals who need help that if we ask for it people are going to give it,” Lindsey said. “It’s really amazing how people will rally behind stories like this that they connect with. A lot of the people that donate either have pets with similar issues or have had themselves a similar issue, and so they feel a connection to the animal. Finding those little connections and trying to get them out there is really important.”

They are not only looking for people who can donate money though. AWLA always needs more toys and supplies, so donations of things like blankets, towels and cat carriers are always appreciated, as well as donations of time.

“We have our volunteer program, so people can come and just give their time, which is also very important,” Lindsey said.