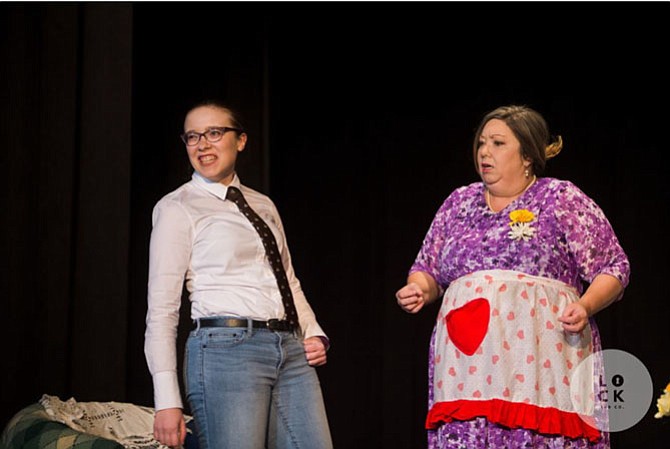 Sarah Cusenza stars as Ginny and Sally Cusenza as Amanda in “For Whom the Southern Belle Tolls.” Photo by Lock & Company

Tim Caron stars as a UPS driver and Julie Edwards as Jenna in “One Click Away.”

Angelena LeBlanc stars as an EMT, Joseph LeBlanc as an EMT, Jason Malm as the husband, and Tim Caron as the man in “Death Be Not Loud.”

The Vienna Theatre Company is presenting “Eclectic, Essential… Relationships,” a group of four one-act plays from Jan 26 through Feb. 4, 2018 at the newly remodeled Vienna Community Center.

According to Tom Epps, president of the Board of Directors and co-producer, “There are four comedies and they’re all about relationships between people. What we want to do is provide a wonderful evening of theater for theater-goers to get a potpourri of different styles of playwriting, approaches to comedy, what someone does in a short time frame versus a long timeframe.”

He added, “What’s also been fun about it is you get to do four different takes on personal relationships. Some of them are longer than others; some short. It’s very interesting when you have an evening of one-acts to see how different playwrights tackle the short format as opposed to say a two-and-a-half-hour show. It’s also interesting to work with four different directors, and we have some overlap of cast members so I think it would be fun for the audience to see actors play multiple parts.”

THE PLAY, “For Whom the Southern Belle Tolls,” by Christopher Durang is directed by Haley Murphy. In this parody of “The Glass Menagerie,” the fading southern belle, Amanda, tries to prepare her hyper-sensitive hypochondrial son Lawrence for a feminine caller.

“You don’t have to know anything about ‘The Glass Menagerie’ to come and find it extremely hilarious,” said Murphy. “It’s a lot of physical comedy. It’s basically the story of a mother who is sort of bitter about life and trying to kind of launch her children and find a life of her own, and it’s all told through her perspective.”

She continued, “But it’s very silly, very funny, a lot of physical comedy with four very powerful actors that are pretty experienced in comedy, so it should be quite funny.”

The next play, “Death Be Not Loud” by Thierry Sagnier, is directed by Stuart Fischer. In it, a husband reads in the obituary section of the newspaper that his wife is dead. He and others refuse to believe otherwise even though the wife is still very much present and alive.

“‘Death Be Not Loud’ is a very funny comedy, which makes fun of how people believe everything they read in the newspaper,” said Fischer. “A husband reads in the morning that his wife has died and believes it even though his wife is in the bedroom, and he actually calls her out to tell her that she’s actually dead. Needless to say, she doesn’t take it well, but everybody else believes that she’s dead. It’s very, very funny.”

The next play, “Capsmittment” by Jean Koppen of Alexandria, is directed by Juli Tarabek Blacker. It’s about an issue that comes up between two devoted ice hockey fans. Will this development destroy their bromance – or enhance it?

“It’s about these two 20-something guys who have been friends for years and their friendship very much revolves around the Capitals [ice hockey team],” said Tarabek Blacker. “And so they’ve been watching Caps games for years…And one of them has gotten season tickets so it turns into this almost romantic thing of are they going to share the tickets or not. It’s a very funny play; it’s a 12-minute show, it’s very short. But it’s a fun look into the life of 20-somethings in D.C. It’s very much a millennial show.”

THE FINAL PLAY, “One Click Away” by Dean Fiala, is directed by Sue Bevine. After being fed up with the dating process, Jenna seeks a more permanent solution with the help of the Internet.

“The play is about a 30-something young woman who is tired of the dating scene through these social networks. She’s ready to just give up. Her friend comes over and tells her about a brand new way of meeting men. You can buy one on Amazon. And the story unfolds from there,” said Bevine.

She added: “At first she doesn’t believe it and then she decides she’s going to try it because she’s really kind of desperate. And a series of men show up who are hysterical. They’re very funny. One doesn’t show; the next two she’s got to send back. And there’s a big surprise at the end because she does wind up getting married.”