Fairfax delegation to General Assembly hears from public before heading to Richmond. 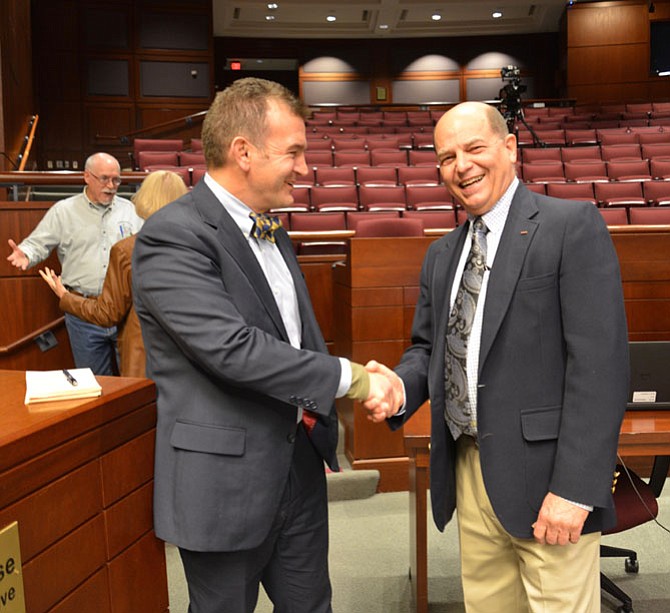 Theresa Sheipe of Fairfax was one of many members of the “More Recess for Virginians” group who either spoke or supported from the audience in favor of protecting and expanding recess in Virginia schools. Sheipe and others provided studies and analysis that demonstrates the benefits of increasing free time for youngsters.

Jeanne Lavelle of Fairfax, with the assistance of interpreter Jessica Holt, addresses the Fairfax delegation to the General Assembly. Lavelle advocated for funding to ensure that deaf and hearing impaired children are not left “functionally illiterate” because they are not given the opportunity to learn language skills. “Many deaf kids leave high school with third and fourth grade literacy abilities … and not because they are not bright,” Lavelle testified. 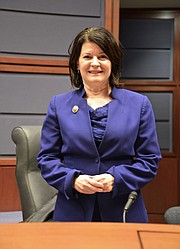 State Sen. Barbara Favola (D-31) admits she has her work cut out for her in the 2018 Regular Session of the Virginia Legislature. She’s tackling Paid Family Leave, Gun Safety, Domestic Violence Prevention, Medicaid Expansion, K-12 education reforms and improvements, and Equal Taxing Authority for Counties, to name a few. “We’ve made progress in the past.” Favola is optimistic that great strides can be made toward achieving these goals for all Virginians.

The 2018 Regular Session of the Virginia General Assembly convenes on Wednesday, Jan. 10. Before the state senators and delegates head off for Richmond, many of the Fairfax County contingent met with constituents in a Saturday, Dec. 6, public hearing at the County Government Center.

More than 100 registered speakers and their supporters braved single-digit temperatures for the opportunity to tell their elected representatives just what they hoped to see included in the upcoming legislative agendas.

Fairfax County Board of Supervisors Chairman Sharon Bulova welcomed the delegation, and then began the hearing as “Speaker # 1,” representing the interests of the entire county.

Funding for the educational needs of the county was first on Bulova’s ask list — a theme that was often repeated during the marathon five hour-plus hearing. She followed that request with an appeal for funding for WMATA, citing that reliable and safe public transportation is critical to the economic health of the region.

THE GROUP “More Recess for Virginians” came out in full, green t-shirted force, asking the delegation to support legislation that would include recess as part of the “instructional hours” in elementary schools. Recess supporter Theresa Sheipe from Fairfax asked the legislators to provide the School Board more flexibility to better serve the children, and Shannon Hamilton, Ph.D., a neuroscientist from Alexandria, added “Science is on the side of recess. We hope you are, too.”

Other topics included concerns for the environment and climate change impact, with many arguing for renewable energy sources, and several opposing what they consider the “influence of Dominion Energy” on Virginia policies. The Faith Alliance for Climate Solutions, 350 Fairfax, and The Climate Reality Project put forth speakers representing their organizations, among the dozen or so individuals who also spoke on the issue.

Social services advocates were also well represented. Speakers from the Fairfax-Falls Church Community Services Board, The ARC of Northern Virginia, Fairfax County Community Action Advisory Board, Northern Virginia Family Services, and Social Action Linking Together, along with numerous individuals, like Jeanne Lavelle with the Virginia Association for the Deaf, urged the delegation to consider the needs of the community’s less fortunate and the more vulnerable.

Several of the social service organizations also supported the expansion of Medicaid in the Commonwealth, as did speakers from the county government employees union, SEIU Virginia 512. State Sen. Dick Saslaw (D-35) responded to the “expansionists” that they wouldn’t find many dissenters on that topic among the legislators on the dais.

Advocates for stronger gun safety laws, bipartisan redistricting and voter protection, the decriminalization of marijuana, banning solitary confinement in prisons, funding of judgeships, immigrant support, and providing more powers to the civilian police force review panel and auditor all had their turn at the microphone.

In past years, citizens had more opportunity to talk with their representatives after the hearing, but the length of this year’s event saw several of the legislators called to other duties before the close, and even the majority of the citizen activists did not make it to the moment when Saslaw called “time.”

Petersen took a few moments to chat with his constituent Bill Barfield, who had testified and presented the legislative issues put forth by the Fairfax County Federation of Citizens Association.

Boysko will be sponsoring the Dignity Act this session, and supporting in-state tuition legislation, as part of her agenda.

Paid Family Leave, Gun Safety, K-12 Education reforms and enhancements are also in her sights. Favola admits that some of her proposed legislation requires taking some “big steps,” but that on many of the issues, “many small steps have already been taken, so there’s reason to be optimistic.

To track what state senators and delegates are up to in the General Assembly, to contact them, or to track the progress of proposed legislation, visit www.virginiageneralassembly.gov.