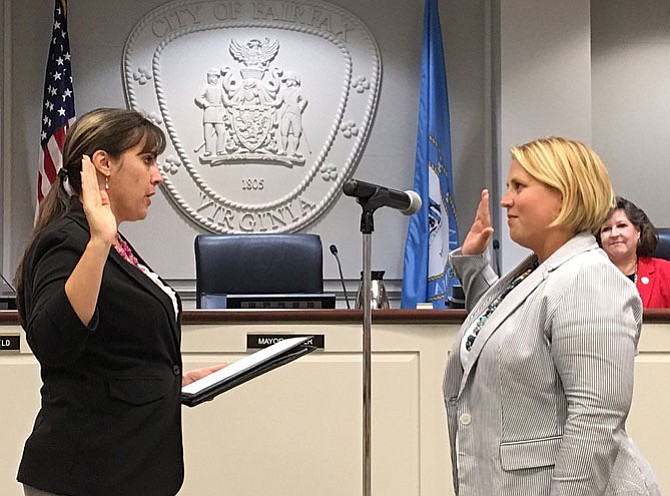 Before joining the Fairfax City Council Tuesday night as its newest member, Jennifer Passey thanked her husband Mike and their four sons for their support, and her in-laws, Sahdev and Carolyn, for their encouragement during her election campaign. She also noted that her children are “the reason I want to work hard to see our great City continue to be successful.”

Growing up, she said, “I watched my dad be a force of optimism and a doer in our community just outside downtown Minneapolis. He listened, he learned and he brought people together for the greater good.”

Passey then recalled being a high-school sophomore in 1993 and having to read the book, “Roots,” by Alex Haley and write a paper on it. “My dad worked in the direct-marketing industry in Minneapolis and, as a part of this, he worked closely with the Postal Rate Commission here in Washington, D.C.,” she said. “At that time, the Commission’s appointed chairman was George Haley, Alex Haley’s brother.”

So Passey’s father gave her George Haley’s phone number and urged her to call and interview him so she would get a deeper understanding of what she’d read. “And I did,” said Passey. “A few weeks after I interviewed Mr. Haley, I received a letter in the mail from him. It said, ‘Learning about others is, I think, one of the most important things we can all do, in order to make our country and world a better place in which to live. It is very important, Jennifer, never to stop learning’.”

Some 24 years have passed since then; and, she said, “I have kept my promise to never stop learning. I look forward to working and learning together with City residents, City staff, City Council colleagues and our mayor to move our City forward in a positive direction.”

“Together we can make great things happen, and I am excited to get to work with all of you here this evening,” continued Passey. “There are great opportunities in our reach; and as we work to seek those opportunities, we will also work to address our City’s challenges.”

Councilwoman Janice Miller said she was pleased to have Passey on the Council because she’s “smart, open-minded and collegial and will be a great addition to our working group.”

Passey thanked City staff for getting her up-to-speed on the various issues facing the City.

She then shared a valuable piece of advice she received from a City resident, just two days after the Sept. 12 special election. It came in a letter from Madeline Clary, a second-grade classmate of Passey’s twin sons, Colin and Declan.

Madeline wrote, “Dear Councilwoman Passey, congratulations. I know you will make a difference in our community. If I were a Council member, I would try to leave a place better than I found it. God bless you always. Your friend, Madeline.”

“Thank you, Madeline,” said Passey on Tuesday. “That is exactly what I hope to do with my time on the City Council. Thank you, again, to everyone who is here tonight. I look forward to serving you and the wonderful City of Fairfax.”