Dodson To Perform at Opera NOVA 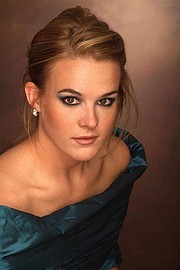 Dodson most recently was singing Mimi in “La Boheme” the role of Tosca in Sicily with the Mediterranean Opera Studio. She has sung multiple concerts in Italy with the Treviso Summer Concert Series, including selections from “Otello” and “Madama Butterfly.” A native of Colorado, Dodson won rave reviews at the Pikes Peak Center for Opera Theater of the Rockies and in the Aspen Music Festival. As a young singer, Dodson was a finalist in the Metropolitan Opera Auditions as well as a semifinalist in the Meistersinger Competition of Austria.

Sacin has been artistic director of Opera NOVA for five years, performing regularly with Opera Camerata in Washington, as well. He has appeared as a recitalist in Russia, Japan, Costa Rica, Honduras, Venezuela, Bolivia, his native Peru and throughout the United States.

Opera NOVA, formerly the Opera Guild of Northern Virginia, regularly puts on concerts aimed at seniors, young people, minorities and others who would not normally attend more costly events in Washington. Every year it puts on an opera seen by hundreds of school children, the most recent being Scott Joplin’s “Treemonisha” last spring.