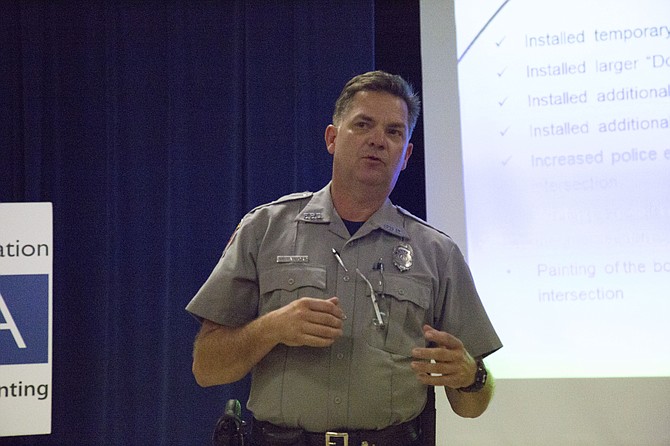 Master Police Officer John Alford, who works for the Fairfax County Police Department’s McLean District Station traffic team, told the crowd that they get the most complaints about traffic in the surrounding blocks near the Balls Hill Road and Georgetown Pike intersection. There is not enough room to pull over traffic violators near the intersection without causing safety hazards or further traffic backups. The VDOT is working on widening and lengthening the shoulder. “Once that shoulder gets widened and it gets blessed for safety issues, we’re going to be out there,” he said. “We’re going to be making our Christmas card list a little bit longer … People will either love us or hate us.” Photo by Fallon Forbush. 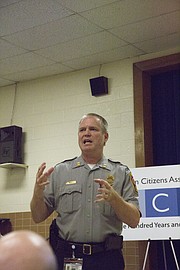 Capt. John Trace of the Fairfax County Police Department’s McLean District Station addressed the crowd during the meeting. “We are one of the only stations out of the eight stations in the police department district stations that has a full-time, dedicated traffic team,” he said. 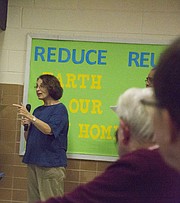 Sally Horn, a board member of the McLean Citizens Association, advocated for extending the 495 Express Lanes across the American Legion Bridge to ease traffic from commuters who use local streets in McLean neighborhoods to get home after working in Tysons. “It doesn’t make sense to try to get on the hot lanes in the Tysons area because it’s going to take you nowhere,” she said.

April Georgelas, who lives west of the Capital Beltway (I-495), insists that VDOT’s decision to open the shoulder and expand the roadway to five lanes increased traffic in McLean. The existing shoulder was rebuilt to allow traffic on the left shoulder of northbound I-495 from where the 495 Express Lanes end to the George Washington Parkway — a total of 1.5 miles. VDOT began work on the $20 million project in June 2014 and completed it in June 2015.

Dranesville District Supervisor John Foust opened the meeting and promised his constituents that he would work with the county and commonwealth transportation departments to mitigate traffic issues in McLean. 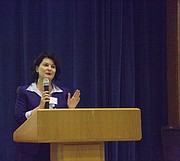 Virginia Sen. Barbara Favola (D-31) told the crowd that they had been “very proactive” in letting her know that growing traffic congestion in McLean has affected their quality of life, and that she instructed the VDOT to alleviate traffic until the core problem, the American Legion Bridge, could be improved.

County and state officials agreed to meet with McLean residents after the community demanded they do something about increased congestion and cut-through traffic in their residential neighborhoods.

The meeting at the Cooper Middle School cafeteria on Monday evening, Sept. 18, was organized by Dranesville District Supervisor John Foust, Virginia Del. Kathleen Murphy (D-34); Virginia Sen. Barbara Favola (D-31); and the McLean Citizens Association. Representatives of the Fairfax County Police Department, Fairfax County Department of Transportation and Virginia Department of Transportation were at the meeting to talk with residents about what is being done.

“As we all know too well, traffic around Balls Hill [Road] and Georgetown Pike, the intersection is bad and its impact on residential neighborhoods is causing serious quality of life issues,” Foust said at the meeting. “We believe that the problem is the lack of sufficient capacity on the American Legion Bridge and the [Capital] Beltway on the Maryland side.”

Foust, Murphy, Favola and the MCA will be working on mitigating traffic issues until Virginia and Maryland can agree on a more permanent solution, Foust said.

“I’m really here to listen to your concerns,” Favola said during the meeting. “You’ve been very proactive in letting us know how the traffic congestion has affected your quality of life, and to date; we have not found a magical answer.”

In the meantime, McLean residents are blaming the bridge’s backup for the increased clogging of traffic flow and cut-through traffic in their neighborhoods and are not satisfied with waiting.

“We have looked at and worked on all of these,” Allison Richter, VDOT’s liaison for Fairfax and Arlington counties, said during the meeting. “I think we’re at a point where at least 26 of them are expected to move forward for implementation or further evaluation.”

However, she warned the crowd that for every potential remedy, there would probably be a negative impact.

The meeting comes 12 days after the board of the citizens association renewed its commitment to lobby for congestion relief at the American Legion Bridge, which carries the Capital Beltway, or Interstate 495, over the Potomac River to connect McLean and the rest of Fairfax County to Montgomery County in Maryland.

The bridge is located entirely in Maryland. Though the Virginia Department of Transportation has discussed extending the I-495 Express Lanes over the bridge, widening the bridge or adding an entirely new crossing to the west, Maryland officials have said they would not build another crossing into the rural areas in the northwestern area of Montgomery County.

Maryland opponents say building another bridge could damage the county’s Agricultural Reserve, which is zoned to protect farmland and agriculture and encompasses 93,000 acres along the county’s northern, western and eastern borders, according to the Montgomery County Planning Department.

Still, the National Capital Region Transportation Planning Board plans to study the feasibility of a bridge that would connect Virginia Route 28 to Maryland Route 200, which has met opposition even before the process has begun.

On July 18, the County Council for Montgomery County adopted a resolution opposing a new crossing over the Potomac River and urged the TPB to oppose any further study of such a project.

THE CITIZENS ASSOCIATION is in talks with the office of U.S. Rep. Barbara Comstock (R-10) in order to bring more attention to the issue. Comstock was unable to attend the community meeting, but she sent two staff members from her office to take notes and report back.

“Having listened to complaints and concerns, and walked the streets … I made it a point to then go and meet with legislators on the other side of the bridge,” Murphy said during the meeting.

Her goal in engaging the Maryland legislators is to craft a joint letter to Republican Maryland Gov. Larry Hogan.

“I’m hoping that we can send a letter over, but what I’d also like to do is start a website where we can all sign our names, demanding that he act.”