A community meeting set for Monday, Sept. 18, at Cooper Middle School at 7 p.m. 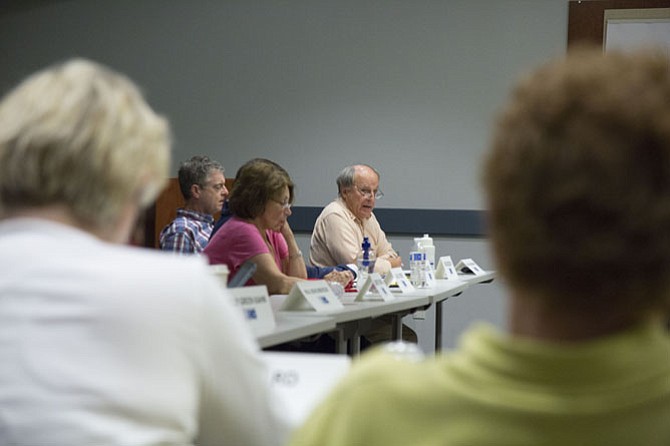 McLean Citizens Association Transportation Committee Chair David Wuehrmann updates the board about the American Legion Bridge during its meeting on Wednesday, Sept. 6, at the McLean Governmental Center. Photo by Fallon Forbush.

The McLean Citizens Association is lobbying to relieve congestion at the American Legion Bridge, which carries the Capital Beltway, or Interstate 495, over the Potomac River to connect Fairfax County in Virginia and Montgomery County in Maryland.

“The underlying premise to their letter is flawed,” Nohe said. “They’re suggesting that replacement of the American Legion Bridge is not included in the TransAction plan that NVTA uses. That’s not correct though; it is in the plan.”

Nohe, who personally supports the replacement of the bridge, says the TransAction plan does not establish prioritization of the projects it identifies and that no one is requesting funding from his organization for a project to replace the bridge.

The NVTA receives most feedback about the region’s metrorail system, which, like the bridge, requires multijurisdictional cooperation, according to Nohe.

“It’s unlikely that the NVTA could singlehandedly fund a replacement of the American Legion Bridge; that’s a multimillion dollar project,” he said. “If the commonwealth of Virginia and the state of Maryland and all of the other involved organization decide it’s a top priority, and come to an agreement on how to go about replacing that bridge, the NVTA is a possible funding source for a portion of the cost of that replacement.”

But it doesn’t look like that is happening anytime soon.

THE BRIDGE is located entirely in Maryland. Though the Virginia Department of Transportation has discussed extending the I-495 Express Lanes over the bridge, widening the bridge or adding an entirely new crossing to the west, Maryland officials have said they would not build another crossing into the rural areas in the northwestern area of Montgomery County.

Maryland opponents say building another bridge could damage the county’s Agricultural Reserve, which is zoned to protect farmland and agriculture and encompasses 93,000 acres along the county’s northern, western and eastern borders, according to the Montgomery County Planning Department.

Still, the National Capital Region Transportation Planning Board plans to study the feasibility of a bridge that would connect Virginia Route 28 to Maryland Route 200, which has met opposition even before the process has begun.

On July 18, the County Council for Montgomery County adopted a resolution opposing a new crossing over the Potomac River and urged the TPB to oppose any further study of such a project.

The MCA, which has been advocating for improvements to the bridge since it passed a resolution in 2015, is finally getting responses from officials in Virginia. However, they are passing the buck to Maryland.

“We got a reply from Aubrey Layne, the Secretary of Transportation on Aug. 29, basically acknowledging that this is a problem, but Maryland owns the bridge and VDOT is working with Supervisor [John] Foust to set up a meeting,” David Wuehrmann, MCA’s Transportation Committee Chair, said during the association’s board meeting on Wednesday, Sept. 6, at the McLean Governmental Center.

“The majority of the American Legion Bridge is owned by the State of Maryland, who has begun their own preliminary studies of the Beltway corridor and the existing bridge and traffic demands,” the letter said. “Any new Potomac River crossing would be almost entirely within Maryland’s jurisdiction. The Virginia Department of Transportation (VDOT) has partnered with regional partners to review concept of an additional crossing. Maryland’s participation and concurrence is compulsory before any next steps can be taken.”

The MCA has local officials on board to discuss the bridge now.

Foust, Dranesville District Supervisor, is hosting a community meeting in partnership with the MCA next Monday, Sept. 18, at the Cooper Middle School on Balls Hill Road in McLean at 7 p.m.

“In response to the concerns of residents throughout the McLean area, I have been working with Delegate Kathleen Murphy and Senator Barbara Favola, the Virginia Department of Transportation (VDOT), Fairfax County Department of Transportation (FCDOT), and Fairfax County Police Department (FCPD) on options for addressing the backups and cut-through traffic caused by the lack of sufficient capacity on the American Legion Bridge,” Foust wrote in a Sept. 6 email to constituents.

Staff members from the Virginia and Fairfax County departments of transportation will discuss suggestions for improving traffic problems in the McLean area. Residents can share their concerns and provide comments on the proposals.

OPENED IN 1962 as the six-lane Cabin John Bridge, the American Legion Bridge was renamed in 1969 and widened to eight through lanes and two merge or exit lanes in 1992, according to the Northern Virginia Transportation Alliance.

Now 55 years old, the MCA is determined to make the bridge a priority and has contacted the office of U.S. Rep. Barbara Comstock (R-10) to help pull a plan together between the two states.

“We all knew from the beginning that the bridge is really substantially owned by Maryland,” Stein said during the MCA’s Sept. 6 board meeting. “The bridge is state and national level and we need in that case to attempt to get … national involvement, national recognition if we can, as well as state involvement,” he added.